The first camp of the year

Mud, snow, smokies and a spirit of adventure

Around this time of year, those who enjoy spending their weekends outdoors — like myself — begin feeling antsy for camping season to begin. The ice skates have all been put away, the winter gear box is out and readily accepting the scarves and mittens that dominate our winter months in North Idaho. Soon it will be packed away until the snow flies again next winter. Kids appear on bikes and longboards downtown, and everyone has a glow that only a change of seasons can bring.

While shopping at an outdoors store recently, Cadie and I lucked upon a huge car camping tent that sleeps six people. It originally sold for $450, but was returned because of “bent poles” and was in a bargain bin for $100. We scooped it up immediately and that set the wheels in motion for our first campout of the year. 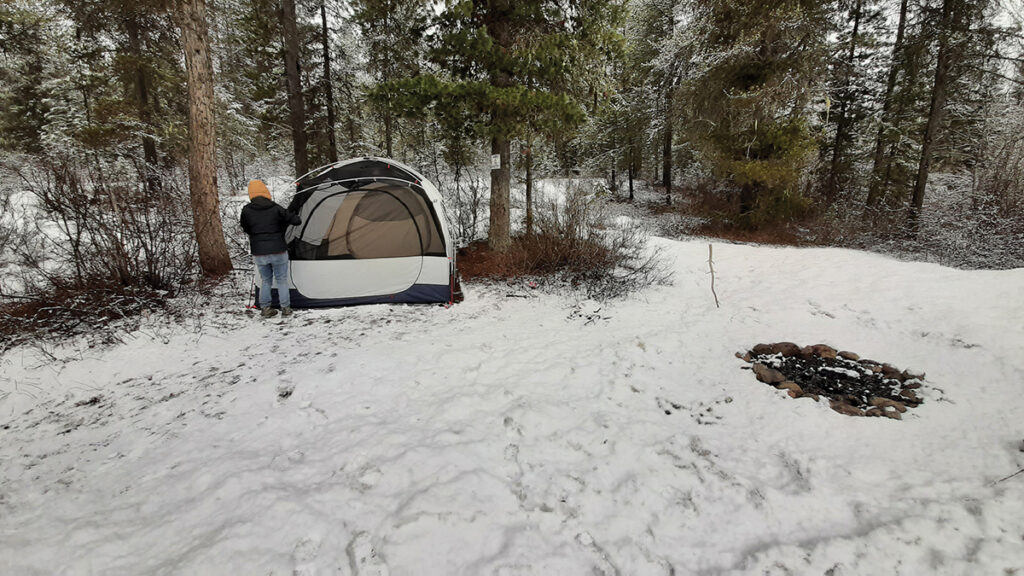 Taking down the new tent in the morning after waking to a couple inches of snow. Photo by Ben Olson.

On Friday afternoon, Cadie and I both finished our work tasks as quickly as we could and began the frenzied packing of the truck. In mid-summer our gear is always organized, but after a winter dormant in the shed, we had to weed through the necessities and begin anew.

We threw bottles of beer in the cooler, grabbed a jug of rye with just a few fingers remaining and packed a random assortment of snacks in a bag before blasting out of town in a blaze of glory.

We’ve always frequented the off-the-beaten-track spots to pitch our tent when car camping. In the summer season, there’s always a feeling of anxiety that someone might’ve already nabbed one of our favorite spots, but as we barreled up a county road next to a river, I had no fear it was taken. Nobody would be camping that night.

After the pavement ended, our smiles slowly faded as the snow along the side of the road got deeper. It’s easy to forget when living in town that all it takes is a short drive up in elevation and winter is still very much a thing.

Then the road became muddy and huge ruts formed. Bonner County roads are famous for their mud-holes this time of year. I remember once when I was a kid and my mom got our family station wagon stuck up to door handles in a mud hole. When it finally settled, it looked like someone had cut away the top of a Toyota and placed it on the road surface.

These ruts weren’t that deep, but I did halt at one point to back up and get more speed. There was about a mile to go to our spot and the road was getting worse and worse.

“Maybe we didn’t really think this through,” Cadie said.

When do we ever think anything through?

Thanks to some speed and four-wheel drive, we managed the soft spots and blew clear past the road leading to our spot because it was plowed over with a snow berm. I had to back up and pass back through the mud to find our road. There were easily two feet of snowpack past the three-foot berm.

“Hmm,” we both said at the same time.

Well, we didn’t drive all this way for nothing, I thought, and blasted through the berm. We plowed through the snow for a bit, almost reaching the spot and promptly got stuck.

After some creative rocking, I managed to get out of the deep snow and we found our spot snowed in except for a perfect tent pad under some trees where there was bare ground. Pushing through the remaining bit of snowpack, we finally parked to offload the gear.

There were only a couple hours of daylight left, so I built the fire while Cadie began setting up our new tent. There was the usual firepit full of trash left over from the last campers of 2020, which we found after digging the snow out of the pit. When will people learn?

Thanks to some well-seasoned wood we brought from home, we had a roaring fire crackling in no time and finished setting up our mansion of a tent. As we suspected, it was perfectly fine. The “bent poles” didn’t affect anything. Score.

With beers cracked and chilling in the snow beside our chairs, we cooked our simple dinner of Woods jalapeño cheese smokies — an absolute staple of outdoor life in North Idaho. Occasionally a foul death smell would waft into camp, which turned out to be from a rotting elk carcass just a stone’s throw from the firepit. All that was left was a huge rib cage and an amorphous sack of organs the size of a bean bag. It was then that I remembered I forgot the bear spray. Oh well.

The temperature dipped with the sun, reminding us that it was still winter. The fire had burned a small bare spot around the pit, but we were sitting in chairs perched atop the snow, so it was like hanging out atop a freezer.

When we tossed the last log into the fire, we knew it would soon be time for bed. Unlike our backpacking tent, this mansion didn’t trap the heat so well in its giant interior. Lucky for us I threw two crucial items in my pack at the last minute: super-sized hand warmers that claimed they produced heat for 18 hours. We wriggled into our sleeping bags and broke the seal on the warmers, each taking one to hold inside the sleeping bag. Thus, we slept sound and warm through the night.

We awoke and threw open the tent door, laughing to discover it had snowed two inches. We layered up and emerged into the sunny morning, only to notice we had no firewood left with which to cook our morning breakfast.

It was a damp, cold morning and we both looked at each other with our eyebrows raised.

“Let’s get the hell out of here,” Cadie said. We pulled down the tent with a quickness and got inside the truck to warm up, already dreaming of the lazy Saturday we’d just earned.

Some might ask, “Why drive through the mud and snow to sleep shivering in your tent, only to pick up and leave right after waking?” The simple answer is that we do this because we live in a place that caters to those who like adventure. All my life I’ve been surrounded by friends who push the envelope, camping in the snow or bushwhacking through the wilderness to reach a rarely-seen mountain lake. One friend in high school made the front page of the paper for doing a backflip on Schweitzer in the morning and doing another backflip on a wakeboard that afternoon. Another friend decided one day he would ski down the steep face of the Green Monarchs.

In short, it’s why I still hang around this place. There is a hardiness that I love about those who choose to live in North Idaho; those who choose to take a risk, to climb an unknown peak, to endure the wilds in an effort to soothe that driving voice inside that keeps saying, “Keep going!”

As more and more newcomers discover Sandpoint for their own, I fear this hardy spirit may wane in the years ahead if we don’t remind ourselves that this isn’t a retirement community or a quiet place to avoid the hectic nature of the world. It’s a vibrant city surrounded by wilderness that’s ready to eat your lunch if you’re not prepared.

That’s why we do it. To claim our small corner of the Earth here in the name of fun, adventure and even misfortune, rather than slowly dying before the blue light of the television or computer screen.

As we trundled down the mountain and watched the snowpack fade to green and brown earth, we exhaled and began planning our next adventure — it’s never enough to satisfy that voice inside, forever telling us to “Keep going.” I’m listening to it with ears wide open.