A legacy of rooting for our community

“We welcome a new story as each one ends,” says Simon Ronniger, when asked about the year in the life of a farmer. “The wintertime in the warehouse is long, cold and dark, and then we feel invigorated to start planting, but by the end of the season in the fall we are sick of the dirt and sick of the outside and we want to be in the cellar where it isn’t freezing. Each season brings a welcome change.” 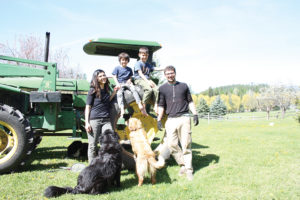 David Ronniger began farming on their rich 60 acres (nestled on a south facing slope, Northeast of Moyie Springs) in 1987 when he was a park ranger and Simon was just a 1-year-old. Simon remembers “helping” Dad when he was around four. It wasn’t until Simon was 20 that the real farm work began. David’s expectations were high, but Simon chose the work. Today, when asked if he would ever consider other work, Simon responds that farming is “all there is. It’s an enjoyable job.”

A decade ago, an unexpected fertilizer came in the form of a beautiful woman. Marqui Ronniger has the natural beauty of cover girl Meghan Markle. She has style, too, but she is a practical and humble farmer and currently a driving force of Ronnigers’ farm. “We grow organic food because we are passionate about it, and we want to share it with the community. We like the job itself. There are so many reasons why we do it and love doing it,” said Marqui.

“I am from California and I wasn’t farming there, but I was taking some college classes that lead me into learning about WWOOFing (“Willing Workers on Organic Farms”), which is the internship program that we use still,” says Marqui. “So, I came as an intern for a full season internship. I had never really been on a farm. I had gardened, but this was my first real farm experience. I fell in love with this farm the first day, and I fell in love with Simon a little later.”

“I really had a lot to learn when I got here,” Marqui says, “but it has been ten years now and I feel a lot steadier on my feet with farming. We have made a lot of mistakes, and we have grown a lot, and I think that is a big part of farming — you can never know it all, and that is why I love it. Each summer is a new adventure to see what Mother Nature and our family will throw our way.”

The youngest Ronnigers are Strummer, age 8, and Shepherd, age 5. They ride their bikes around the farm and skateboard in the massive, earth covered, concrete cellar. “We are trying to cultivate a positive image for them,” said Simon, who isn’t expecting any work out of his sons. 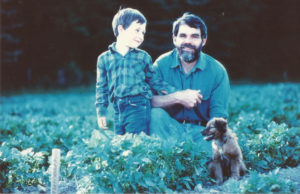 Simon and David Ronniger in the potatoes around 1990. Courtesy Photo.

“It’s hard,” Simon says about balancing family and farming, “because we are trying to find ourselves in the world and it is time for us to be hustling, but we have our kids. We could grow the business a little more, but right now we want to spend time with the kids. We only have about five more years and then they probably won’t want to hang out with us.”

Simon admits that he witnessed his Dad work a little too hard and maybe grow the business too large. While he is committed to farming for life, he imagines doing less as he grows old.

“David had a unique way,” says Marqui, who was mentored by the late Ronniger for her first couple years. “He just loved to work, and he threw himself into work. He was always figuring out a better way to do things, or his own way to do things. Farming was definitely his passion.”

I met Simon and David Ronniger in 2007, right after we moved to Sandpoint. Too proud to go to the food bank and struggling with our new transition and very young children, I was humbled and eternally grateful when I purchased a few things on the Ronniger farm, and Simon casually loaded me up with around 300 pounds of cull potatoes. Ronnigers’ farm fed my family that first long winter, and I will never forget it.

David moved to Hot Springs, Mont., in 2011, where my husband and I would visit him after hours of soaking. He started an organic shop that is a success to this day. David sold his delicious kimchi, fresh produce from his Hot Springs garden or his legacy farm in Idaho, fresh bakery goods and all the other products one might hope to buy in a natural food store. Every time I was around David, I learned something: what minerals the soil needed, how to make kimchi, the benefits of Jerusalem artichokes and much more.

Tragically, David passed away in 2017, from cancer related causes.

“David built this whole entire farm, and everything we do we try to honor him,” said Marqui.

The Ronnigers have a ton of planting to do, so we won’t see them at the market again until July. Let’s root for their season!