50 ways to hurt yourself

The joy of growing old

Something nobody mentions about growing old is that suddenly you can — and do — hurt yourself in new and imaginative ways. This has been going on ever since I turned about 60. After eight years, this morning I made some progress. I found a new way to hurt myself, but I avoided it just in the so-called “nick” of time. 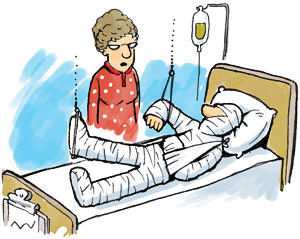 You see, in the last years I have found a new way to hurt myself every day. By “new” I mean that I have never before hurt myself in this way, and frankly, did not think it possible. By “every day” I mean every day.

I don’t count running into walls and doors, which I occasionally did in my middle decades, especially when menstruating. That stopped for a decade, and when I turned 60, I guess I felt that the old ways of hurting myself were becoming old hat. So I invented some new ones. As a warm-up I started with the less inventive ones.

First, I sliced open a finger or two while cooking. When I’m lucky, it’s limited it to slicing off a finger nail. When unlucky, I have to stop making dinner and go get bandages. As I become more circumspect, I don’t cut myself as often. (Somewhere along the line I picked up the erroneous wisdom that keeping knives sharp was better than having dull ones laying around. It has not been my experience that sharp knives cause less damage than unsharpened ones. Just the opposite. This must be advice for young people only.)

Next, I stood up quickly and hit my head on:

a) a shelf that has been there for 15 years

b) a cabinet door I have just opened, and of which I may still have my hand on the handle

c) my husband’s chin, since he must so carefully oversee even the most simple household tasks

d) the roosting boxes in the henhouse. The chickens like to lay their eggs below the boxes close to the wall. I did this once so hard I near knocked myself out.

Narrowing in on more unconventional territory, I stabbed my finger with the little tongue of the buckle on the dog collar.

Now when I awake in the morning I am excited by curiosity: What will it be today?

Maybe I’ll simply fall down for no reason or trip on something that doesn’t exist (some people would say “my feet,” but I believe in things that don’t exist and might as well blame them). I did this in the garden once and cracked a rib.

Not long ago I ran into the bottom of one of those rain chains you use instead of gutters. This one was made out of rocks and caught me on the forehead. Ouch.

I’ve opened the hatch on the back of the car and hit myself in the face. This has already happened twice.

My husband didn’t get the back massage he requires and deserves each morning after I jammed my finger while washing windows.

I am covered with blood blisters. One of my favorites so far, and one I would enter in the most-inventive-new-way-to-hurt-yourself contest was this: While screwing a nozzle on a garden hose, I caught the loose skin on the palm between my thumb and pointer finger in the threads and gave it a good tweak.

I’ve learned is that it is futile to try to guard against these accidents. They might as well be hallucinations, except that they leave very real blood and bruises. Luckily, sticks and stones have remained the loyal sources of injuries they have always been. I take some comfort in that. They are so easy to predict, I can usually avoid the injury. And names do not hurt now at all, the way they once did. Hallelujah. Not even a twinge. I suppose getting old has some few advantages you don’t hear about often.