Feral hogs are bearing down on the Montana-Canada border, but Idaho has (so far) remained swine-free

As Winston Churchill reportedly once said, “Dogs look up to you, cats look down on you. Give me a pig! He looks you in the eye and treats you as an equal.” Bitter wisdom, but are we really equal to pigs? That’s a question confronting wildlife managers in Montana, where huge populations of feral hogs are reportedly wreaking havoc as they near the United States border with Canada. 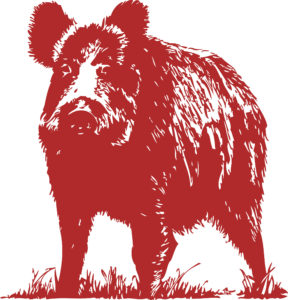 The story broke for U.S. readers after the Kalispell, Mont.-based Daily Inter Lake published a lengthy piece on the porcine pillagers, which cited “multiple reports … of groups of feral hogs being spotted ‘very close’ to the border.” Should they cross into the States from neighboring Saskatchewan and Alberta, “it would be an invasive species the likes of which the state has never seen,” the paper reported, threatening the destruction of farmland, damage to delicate ecosystems and the spread of disease.

Of more potential concern to North Idahoans, the Daily Inter Lake pointed to eight mature feral swine spotted earlier in the summer north of Lincoln County, which borders Bonner County to the east.

Media outlets far and wide picked up on the story, with Newsweek characterizing the animals in a Sept. 11 headline as “ecological train wrecks” and the U.K.-based Guardian leading its Sept. 12 story with “Crisis at the boar-der: panic as Canadian feral hogs approach the US.”

But wild pigs stripping bare the countryside has been a concern for our neighbors to the north for some time. According to a 2014 report from the Canadian Broadcasting Corporation, the pigs were imported from Europe in the 1980s and ’90s in an ill-fated effort to “diversify meat production with wild boars” — either as livestock or game for hunters.

Wiley creatures that they can be, the wild Eurasian boars slipped their pens and did as pigs do, rapidly reproducing with domestic porkers and spurring a decades-long population boom that only recently received its first systematic study, with the University of Saskatchewan releasing its findings in May.

The study, which made headlines of its own, found that pig numbers had risen to dire proportions on the Canadian prairie, leading study co-author, associate professor and wildlife specialist Ryan Brook to speculate to the CBC in September that feral hogs will in the coming decades outnumber people in the province of Saskatchewan.

Though focused on regions east of the Continental Divide, data collected in the Saskatchewan study shows isolated pockets of wild boars in British Columbia — including a population identified between 2011 and 2017 smack on the border just west of the Idaho Panhandle.

Recognizing the potential for problem pigs, B.C. officials in 2014 instituted an open season on feral hogs “anywhere and anytime in the province, as long as it is done lawfully by following all other hunting regulations including observing motor vehicle prohibitions, no shooting areas, no hunting areas, and hunting during allowed hours,” a representative of the Ministry of Forest, Lands and Natural Resources Operations Wildlife and Habitat Branch wrote in an email to the Reader.

As such, the province has managed to keep a handle on its hog situation, though the Ministry’s Wildlife and Habitat Branch did note that feral pigs, specifically razorbacks or wild boars, “can survive in virtually all environmental conditions in B.C.; however, it is estimated there are only a few in B.C., based on the lack of sightings (one to two per year). There isn’t an estimate of how many feral pigs are in B.C.”

Five years ago, the CBC reported wild swine were seen in the Lower Mainland, Kamloops, Okanagan, Peace and Kootenay regions — the latter location being the long valley immediately to the north the Idaho-Canada border.

Despite the paucity of sightings immediately west of the Divide, Idaho wildlife managers are aware of the issue and keeping an eye on it.

Micah Ellstrom, who serves as regional wildlife manager for the Idaho Department of Fish and Game Panhandle Regional Office, said that his office is interested to hear of any porcine reports in the area, but because feral hogs aren’t classified as “wildlife” in Idaho, their management falls to the Idaho Department of Agriculture. Still, Ellstrom recognized that it would be difficult to assess how many hogs might be present in the rugged territory of the North Idaho and southeast B.C.

“[Pigs] revert to their secretive nature [when they go feral], and with these dense forests and difficult terrain, it would be hard to know where they are,” he told the Reader.

What’s more, he added, also by nature their numbers can rapidly grow. That’s a concern with any invasive species — just because their numbers might start small doesn’t mean they’re going to stay that way.

“Often the first kinds of things you do with any invasive is you kind of model it; you want to go out and find out, ‘What’s the problem, what’s the geographic location, how might they invade? What geographic corridors might they follow?’” said Professor James Nagler, who serves as chair of the Department of Biological Sciences at the University of Idaho.

While Nagler wasn’t aware that feral pigs had been spotted in British Columbia, he has followed the larger issue — pointing to the widespread damage caused by rogue rooters in the American South.

The USDA estimates that wild swine are responsible for $1.5 billion in expenses nationwide each year related to direct damage to crops and livestock, as well as control efforts. According to the Daily Inter Lake, quoting Dale Nolte, who directs the USDA’s National Feral Swine Program, that number could rise to $2.5 billion if their numbers and range grow unabated.

In an effort to slow the destruction, USDA in June announced $75 million in funding for swine eradication and control efforts focused on the southern states. Idaho isn’t on the agency’s radar, primarily because the Gem State has already dealt once before with a breakout of wild swine in the southern part of the state about 10 years ago, when wild pigs were released in the Bruneau Valley area southeast of Boise. Hunting and trapping eliminated that population, leading USDA to consider Idaho pig-free.

Keeping it that way is of primary concern to invasive species experts like Nagler, who specializes in issues related to northern pike. Though still awaiting official university approval, Nagler said he is helping establish a new research center at UI specifically focused on the study of invasive species.

“We’re hoping to do the whole range,” he said, listing everything from rangeland plants like cheatgrass to insect pests destroying forests and crops to animals such as fish and, yes, potentially hogs.

“Here you’ve got a pretty large mammal that we may have to turn our attention to,” he said. “We’ll be looking for new problems in the Pacific Northwest, and there will be no other center like this in the region.”

In the meantime, wildlife managers on both sides of the border ask anyone who sees a pig in the bush to report it to the appropriate authorities. In B.C., where there is no official feral swine monitoring program, those who encounter the animals are encouraged to report sightings to the Report All Poachers and Polluters line at 1-877-952-7277. In Idaho, contact either the Idaho Department of Ag of IDFG Panhandle Regional Office in Coeur d’Alene, which can then relay time, date and location information to Ag.

Ultimately — as with any invasive species — it’s all about early detection.

“The big thing with invasives is you need to jump on them early, because once they get going…,” said Nagler, trailing off. “That’s the thing with the zebra mussel, they let it go too late and now it’s a huge problem.”