The art of advocacy

The Pend Oreille Arts Council has been without an executive director for a couple of years now. With the position in limbo, Arts Administrator Hannah Combs and a handful of others operated behind the scenes, bringing visual and performing arts opportunities to the Idaho Panhandle. 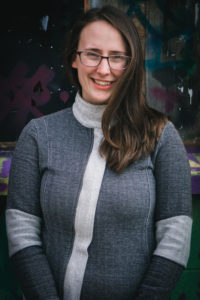 When the executive director slot was originally left open in early 2016, POAC’s Board of Directors asked Combs if she’d be comfortable filling it. At the time, her answer was a solid “no.” Having joined the organization in August 2015, she said she didn’t feel prepared.

“I was really glad at that point that I was honest with myself and with them,” she said. “That would not have been the right time, but since then I’ve learned so much about POAC and what we really do in the community.”

It may not have been the right time then, but the board’s vision recently came to fruition: Combs officially stepped into her new role as executive director of POAC last month.

It’s the latest stride on a journey highlighted by art in many forms. Combs said her parents made sure she had the opportunity to pursue any artistic endeavor she set her mind to, from painting to sewing and beyond.

“In high school I went through so many phases,” she said. “I wanted to be an architect, I wanted to be a fashion designer, a painter, and finally settled on costume design.”

Combs studied theatrical design and technology with a focus on costume design in college, and came to Sandpoint after graduation to stay with her aunt for a few months. After leaving briefly for a summer job on the east coast, Combs came back to North Idaho under the impression she’d apply for jobs in places like Portland or Seattle. She was surfing the Department of Labor website when a part-time position with POAC popped up, and she applied.

“It was so serendipitous,” Combs recalls with a smile.

As she pursued costume design in college, Combs said many of her supporters shared visions of her working in New York, Europe and other metropolis areas with glamorous, large-scale theater scenes. Combs, who grew up in a small town in Indiana, said she’s glad things have panned out differently.

“That would be wonderful, but I love being in a small town where you can see the impact of what you’re doing, and you actually get to know the people who are participating in the programs you’re working with,” she said. “That is far more special.”

Those programs are plentiful, from supporting local artists to bringing educational art programs into area schools and providing scholarships. POAC also hosts several events throughout the year, including a Performing Arts Series, ArtWalk, Arts and Crafts Fair and more.

“I’m really impressed with the artists in our community, (and) with the advocates on the Arts Commission, POAC, the Panida — all of the organizations who work together to make things happen here and make this a great place to live, and do that with relatively few resources,” she said. “I like being able to be in a role to help make that happen.”

According to POAC Board President Carol Deaner, Combs is the perfect person to direct the organization.

“Hannah combines the intellect, the enthusiasm and the background in art that fits perfectly with the position of executive director for POAC,” Deaner said. “I hope to be able to continue to work with her for a number of years as we continue to grow POAC and the cultural services it offers to our community.”

Though it doesn’t feel like much has changed yet, Combs said she knows being the director will mean playing a more visible role in POAC’s operations.

“It’s definitely still surreal,” she said. “I have the great fortune to meet and work with a lot of passionate people who have built and are currently building the community that we live in, which is such a privilege.”

Combs said she’ll always be grateful to the POAC board for granting her the extra time to grow into her new role.

“Now, I’m finally at a point where I can be that advocate,” she said.

POAC’s next event is the annual Art Party, this year held Saturday, June 1 at the Heartwood Center. Find more information and purchase tickets at artinsandpoint.org. Also visit POAC at their new office, located at 110 Main Street Suite 101, in the same building as the Music Conservatory of Sandpoint.