If you enjoy biking or hiking the many trails scattered around North Idaho, chances are you have the Pend Oreille Pedalers to thank. 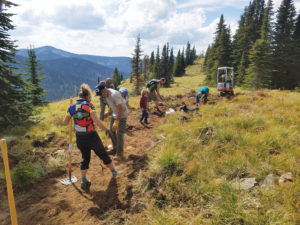 A Pend Oreille Pedalers trail crew chips away at the Uleta Ridge section of the Watershed Crest Trail. Courtesy photo.

The nonprofit volunteer club dedicated to maintaining, protecting and expanding trail access turns 15 this year. Since May is National Bike Month, and because their work often goes unrecognized, I sat down for a beer with a founding father and former president of the club Chris Bier, current president Mike Murray and secretary Susan Drumheller to ask a little about what the Pedalers do and how the club came to be.

“It started on a bike ride,” Biers said. “It was myself and Mark Saverise, the first president, and Sandy Thomas, the president after me, and we decided there were enough mountain bikers in Sandpoint that we needed an organization and a voice in trails.”

Then and there, Biers and Saverise decided a bike club would be formed. They began telling all their friends and before long, a couple dozen mountain bikers and trails enthusiasts were on board, paying dues and hungry to help trail projects.

The club’s first project was the Sherwood Forest trail system located between Sandpoint and Dover.

“We rallied with the Kubiaks to use their land and a trail crew came out,” Biers said. “On any given day a work party of a dozen people were out there with picks and shovels. It was a lot of fun.”

“We crammed a trail in everywhere we could make a trail,” said club secretary Susan Drumheller. “The original trail crews were like caterpillars moving across the mountain. The guy in front would be chipping weeds, the guy in back smoothing the path. We’d put in 100-200 yards of trail a day. Many hands make light work.”

While the original focus of POP was to build and maintain trails for the burgeoning mountain biker population in North Idaho, a noted side effect was reaching non-bicyclists as well.

“These trails don’t just serve bike riders,” Drumheller said. “I go out and run a lot. There’s a gal I see out there, she’s a birder and is always out with her binoculars and dog treats. There are dog walkers. These trails serve lots of purposes.”

Current president Mike Murray said one benefit of working hard on trails up front is the limited amount of maintenance it takes to keep them active.

“The maintenance is minimal,” Murray said. “It’s mostly just windfall we have to worry about. The trail is built so that it drains. We build trails that should sustain themselves.”

Biers said the club hit an apex in the early 2010s with about 175 members.

“When Coldwater Creek left, we lost a lot of members,” Biers said. “We’ve been fluctuating between 125 and 140 members the last 2 or 3 years. Honestly, we have a lot of members who aren’t bike riders, but hikers who appreciate the trails. ”

Biers said a healthy membership is beneficial to the club: “If we can go someplace and say we have 200 people in this club and apply for a grant, it has a lot of sway.”

“That was a really good project,” Biers said. “We did a lot of work with the Forest Service on that one. We came and flagged it, then they came out with chainsaws and tweaked it from there.”

Drumheller said POP member Larry Davidson “adopted” that trail system: “He was involved with helping a connector trail from Mineral Point to Green Bay, and a little connector point to the road and to the Mud Lake/Lost Lake trail. It’s a nice 8-mile.”

The next big system the Pedalers will tackle is the Watershed Crest Trail located in the Schweitzer Basin watershed area. The trailhead for this future system will be located at the Schweitzer roundabout, with the upper portions offering beargrass and huckleberry meadows with killer views of the lake.

“It’s a concept at this point,” Drumheller said. “The plan this summer is to GPS.”

The first phase of the Watershed Crest Trail is Uleta Ridge. POP has been chipping away at the high point part of the trail for the past four years, according to Drumheller, with the goal to connect the systems this summer.

Another project in the works is the new Pine St. Woods in Sandpoint. The Pedalers plan to connect the Sherwood Forest trails system to the Pine St. Woods eventually.

Murray said one of the hardest challenges in the club is not necessarily swinging a pick on trail crew, but navigating bureaucracy.

“We work with private landowners, the city of Sandpoint, Schweitzer, the Independent Highway District,” Murray said. “It’s a lot of work, but it’s worth it.”

All agreed that a healthy trail system is a boon for a town like Sandpoint, where tourists often come for the recreational opportunities.

“It’s a draw for businesses,” Bier said. “Look at companies like Kochava. They’re looking to get younger people here, and having access to good mountain trails is a no brainer. This is a recreational town. And you can grow red tomatoes here. How many resort towns can you say that about?”

“I don’t want to tell you how many years I’ve been mountain biking, but it’s been a long time,” Drumheller said. “A lot of the trails I ride were built by the Pedalers. It’s a big part of my life. For me, It’s kind of my tribe.”

“Biking has been a part of my life for a long time,” Murray said. “The reason I’m part of this club and have been for a long time, is that I love getting people out and doing things. It’s gratifying.”

“The reality of Sandpoint is, we’re a huge recreational community,” Biers said. “People are moving here to play on the mountain and the trail.”

How can you support the Pend Oreille Pedalers? The simplest way is to become a member. For only $20 per year, or $35 for a family, members will rest easy knowing their dollars contribute toward trail maintenance and plans to build new trails in the future. Even if you’ve never ridden a mountain bike, chances are the trails you love to hike were built or maintained by the Pedalers, so consider giving back a little.

The Pedalers are throwing a Basin Trail Festival and work party June 1 to ride and improve the Lower Basin Trails, which can be ridden top to bottom from the roundabout on Schweitzer. Read more about it on page 22. To sign up for a membership, or to learn more about the Pend Oreille Pedalers, check out www.PendOreillePedalers.org.