Shook Twins, with friends John Craigie and Harold’s IGA, to play 12th annual ‘Giving Thanks’ show at the Panida

There is an energy in live music that seems impossible to capture on a record. When a musician truly connects with an audience, a conversation takes place without any exchange of words. That connection hangs in the air, floating on each note and lyric, and lingers long after the instruments are packed up and the venue shut down.

When you attend a Shook Twins “Giving Thanks” show at the Panida Theater, you experience that connection on an exponential level.

That might be because it was one of the first stages where the band’s frontwomen Laurie and Katelyn Shook performed for their hometown community. It also might be because their annual Thanksgiving-week show is so highly anticipated by the friends and family who remain based in North Idaho. It’s also possible that the unbridled energy and rapport stem from the fact that the twins are simply very good at what they do.

Most likely, it’s a combination of all of the above. 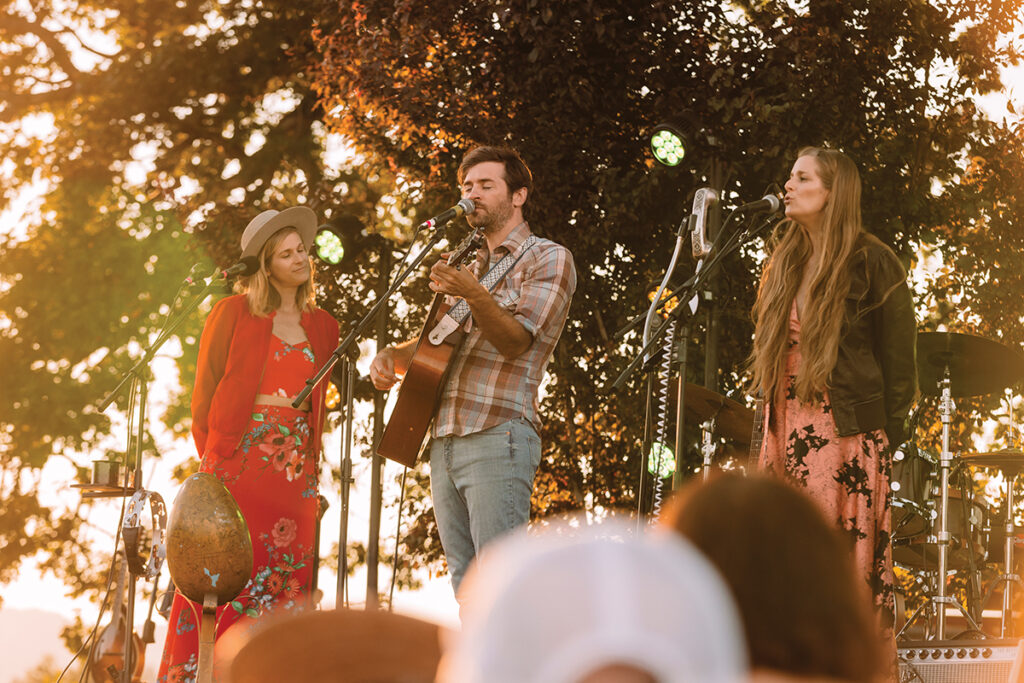 “Seeing our parents and chosen family dancing and singing to our songs is an ineffably fulfilling moment as artists,” Laurie told the Reader.

Shook Twins will play the 12th annual “Giving Thanks” concert at the Panida on Saturday, Nov. 26 at 7 p.m. Doors open an hour before the music, which will feature openers Harold’s IGA, a local three-piece known for its multi-instrumentalist indie rock flair, and Portland singer-songwriter and comic storyteller John Craigie. Tickets are $25 in advance and $28 the day of the show.

This particular gig has grown into a labor of love, Katelyn said.

“We prioritize this show every year because it is so rewarding,” she said, adding that, despite all the hard work required to both promote and perform the “Giving Thanks” show, “all those hours of logistics and stress always turns into this grand explosion of love once we hit the stage.”

“It’s so fun for us to get to curate the entire night and choose exactly who we want to work with, too,” she added. “And playing a show to your hometown community is really special to us and fills our cup so much more than far away shows.”

The Shooks, with Laurie based in Portland and Katelyn in Sandpoint, will be bringing their full band to the Panida show, enabling them to show off the full power of their signature indie folk pop, achieved through both folk instrumentation — think banjo and mandolin — and pop elements like electric guitar, keys, electronic drums and some of the cleanest harmonies you’ve ever heard.

“As we continue to play with these amazing bandmates and we all continue to grow individually as musicians, our groove gets deeper,” Laurie said. “We are more comfortable in the songs and they come easier, which gives us more trust in each other and the tunes. We have such a good team lately and the shows have been feeling so great.”

The “Giving Thanks” concert will once again benefit the Panida Theater, with proceeds from ticket sales and limited edition commemorative posters going toward ongoing efforts to fund the nearly 100-year-old venue. Katelyn currently serves on the Panida Board, highlighting the musicians’ commitment to their hometown.

Both Katelyn and Laurie are eager to share their gratitude for their community the best way they know how: through their art.

“We can’t tell you all how much your support of us and our music has basically kept us going over the years,” Laurie said when asked what else locals should know ahead of the “Giving Thanks” show. “We love you Sandpoint! Always.”