People often find themselves in my cab telling me their strange stories. They talk about how the road brought them to me, how they were stranded and were out of options. I listened to them but never really appreciated their situations—that is, until just last week.

Three nights ago I found myself standing outside a horseshoe-shaped motel in Cheyenne, Wyo., eavesdropping on three Bubbas swigging bottles of Mike’s Hard. It was 2 a.m. I had just returned from a strip club after seeing Kiss with my mother, and I was trying to figure out exactly when my life went wrong. That’s when the Bubbas interrupted my thoughts with a conversation I couldn’t ignore. 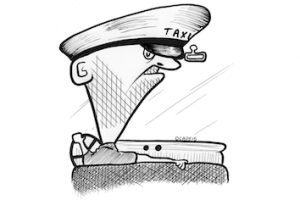 A violent argument arose about whether or not sex with a chicken was gay. The accused said he was an Iraqi veteran who had stabbed before, and he was prepared to stab the others to to protect his hetero honor. The others retorted that they had also stabbed before and would stab him in his chicken-loving member.

As much as I would have liked to watch them all stab each other dead, I went inside and fell asleep to the sounds of my mom mumbling about Trump being a Russian cyborg.

You’d think things couldn’t get weirder, but this, dear friends, was merely the beginning. First, let me catch you up.

I told my mother I would see Kiss with her at Frontier Days in Cheyenne months ago, thinking it would never happen. It did. She drove here from Seattle, scooped me up and off we went.

The first night we only made it to Missoula, where we ended up at an underground hip hop show. Dancing on stage with my mom at a club surrounded by 22-year-olds, I felt like T. Swift shaking it off.

The second night we reached Cheyenne and saw Kiss, which was awesome if you love men in spandex with makeup and big hair somehow being tough. Which I do. I didn’t know a single song but the theater was brilliant.

Following the show, my mom took me to a strip club. She insisted we had to observe the local culture, swearing I would never see anything like it again. I hope she’s right. This place was a strip club/convenience store/liquor store. The stripper was a nice lady who smiled a lot and shuffled around in mismatched socks jammed into flip flops, making her look like she had ninja turtle feet. The experience, although interesting from an anthropology standpoint, was sad all in all.

That night ended with the Bubbas, as you know, and morning found me eating leftover Lengua tacos I found on the motel table. They were the best part of that day.

Long story short, my mother and I got into an altercation about heading home. I was ready to hit the road; I had seen too much and was itching to return to Idaho and the normal weird people I’ve grown to love. Mom was not having it. Somehow, she got the car impounded and ran off with the key to get it out. I lost her in a sea of cowboy bars and wouldn’t see her again until a few days later in Billings.

I tried to get a flight or rent a car out of town, but everything was booked. The only way out was 24-hour Greyhound two days later. I holed up the first night in a haunted hotel where a triple homicide-suicide occurred. Unfortunately I saw no ghost, even though I was looking.

The second night I stayed in a hotel above the Greyhound station that had great theft reviews. Fortunately for me, everything I’d brought along was impounded in my mom’s car. All I had was a dorky cowboy hat and a shirt that read, “Livingston MT Blows!” along with a picture of a sideways semi.

The bus was late the next morning, so I got to listen to a migrant Hispanic man swear almost continuously for an hour and a half. Eventually we were on the way. We reached Billings at 1:40 a.m., two days since I last saw my mother. She sauntered in, sweaty and carrying a sleeping bag. She had been hitching. She said, “I don’t think I’m going to make it on time to work.” I said, “You should have let me get the car out.”

I boarded the bus. As it pulled away, I watched Mom plug her phone into an outlet in the station.

The next morning, sporting a kinky neck and sweaty, fat seatmate, I killed time until I needed to transfer buses. It was then I noticed someone familiar: the weird man I wrote about a few columns back. You know, the one carrying two duffel bags who I drove to the national forest. The man who could only communicate with hand maps. That was hundreds of miles away. What was he doing here? How had he gotten into this situation?

Then again, how had I gotten here? Nobody knows how we end up where we do. People get themselves in the darndest of predicaments. I know I’ll look kinder on people in my cab from now on after they’ve been on the long, hard road.

What a strange trip it’s been.