Last year we visited World Relief in Spokane. We decided to check back in with the refugee resettlement organization.

For World Relief in Spokane, President Trump’s executive order halting refugee resettlement in the U.S. has brought a level of uncertainty.

World Relief specializes in accepting and resettling refugees in Spokane from war-torn parts of the world after they have completed the vetting process which takes several years. For development director Johnna Nickoloff, Trump’s executive order hasn’t caused as much of a concern as has his overall reduction of refugees allowed into the U.S. 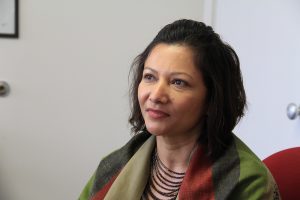 Pingala Dhital, a Bhutanese refugee who was resettled in Spokane through World Relief. Photo by Ben Olson.

“We went from expecting 110,000 refugees, which was the original cap that President Obama put for this year,” said Nickoloff. “Then President Trump put out a 50,000 cap coming to the U.S. This is the lowest the cap has been for several years. That’s is what is most affecting the refugees and our organization right now.”

Nickoloff said that the cap will be reached very soon, especially since a higher number of refugees came in last month.

“We’re close to our arrival cap,” she said. “If we continue at this pace, we won’t be resettling any more refugees this year.”

“We represent a pretty small percentage,” said Nickoloff. “We’re not a huge resettlement organization. Many cities like Seattle have multiple organizations, but here in Spokane, we’re the only ones right now.”

Nickoloff said that many of the newly arrived refugees have expressed concerns about the America they didn’t know about; one which seemingly didn’t want them.

“I’ve heard several people mention that it’s a different America than they thought,” said Nickoloff. “Some people who have come to the U.S. have questions that maybe it wasn’t such a good idea. I think they’re very disappointed. But, on the flip side, refugees as a whole have been through so much that they’re very resilient and they’re generally positive. I think they strongly believe that things will get better, as long as more people are educated on refugees and exposed to different religions.” 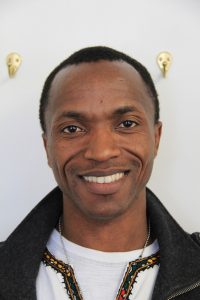 Come Nzibarega came from the US from Burundi. He speaks five languages and is currently working as a French teacher at NW Christian School in Spokane. Photo by Ben Olson.

For many, the executive order’s disruption of the vetting process was more than just a delay; it was a complete setback.

“Many of the refugees are waiting to reunite with their family members,” said Nickoloff. “It’s really tearing people apart.”

The extensive vetting process, Nickoloff said, is a time sensitive process. If one part is delayed for any reason—be it a medical issue, or a delay in paperwork—the vetting process starts all the way at the beginning. With vetting taking an average of three years, this can be a major setback for a refugee who has almost completed the cumbersome process.

“Most, if not all refugees, are literally in danger of their life,” said Nickoloff. “When you delay for 120 days or more, it’s not like they’re just waiting somewhere safe. They’re still in danger. It’s a significant problem.”

Danger is something that Pingala Dhital knows all about. Ethnically Nepalese, Dhital was one of the thousands of the Lhotshampa ethnic group to be expelled from Bhutan and forced into refugee camps in Nepal. She spent 18 years in a ramshackle camp hut before finally being granted asylum in America with her family. We spoke with Dhital last year about her experiences back home, being on the other side of the extensive vetting process and her resettlement in the U.S.

A year later, Dhital is still working as an employment specialist for World Relief. After living for more than five years in Spokane, Dhital and her husband obtained U.S. citizenship.

In a follow up interview this week, Dhital said she can empathize with refugees who are still awaiting asylum in the U.S.

“As a refugee, I feel sad,” she said. “Many people living in refugee camps were hoping to start their lives and may not be able to do that. It’s a hopeless situation. You are living in complete captivity and you feel like you are kind of forgotten by any human being.

Despite President Trump’s increasingly hawkish stance on refugees, Dhital remains optimistic about her newly adopted country: “I love this country. The country I was born in didn’t want to take me back. This is the country that gave me a second chance to restart my life, to look out for my family.”

Pingala Dhital with her husband Kamal, daughter Trishna and son Satya, just one day after arriving in Spokane from a refugee camp in Nepal where she had lived for 18 years awaiting resettlement in the US. Photo by World Relief.

Dhital’s son Satya will graduate in May from Gonzaga University with a degree in civil engineering.

Come Nzibarega, originally from Burundi, is a college-educated man who speaks five language. He was targeted by anti-government rebels because of his work with the United Nations peacekeeping initiatives. After being kidnapped by armed rebels and tortured for information, Nzibarega was rescued by UN personnel a week later. Out of fear for his and his family’s safety, he was relocated to a refugee camp, where he spent six years living before finally being granted asylum in the U.S.

“It was horrible,” Nzibarega said last year of his kidnapping and abuse, “I don’t have the words to describe it.”

A year later, Nzibarega has found a job working as a French teacher at Northwest Christian High School in Spokane. Nzibarega is also going to school at Whitworth College at the same time.

Though President Trump’s defiant stand on the refugee program has caused some discomfort for World Relief, Nickoloff has confidence that the organization will continue its mission to resettle refugees.

“We do not think that there will be an end to our program at this point,” she said. “We anticipate staying open continuing to resettle refugees and continuing to connect and help those who have already arrived here in Spokane.”

However, due to the decrease in refugees being settled in the U.S., Nickoloff  said World Relief has had to decrease their staff size.

“We are not able to function in the capacity that we have in the past,” she said. “We will move more toward relying on local churches and community support.”

President Trump issued the executive order on Jan. 27, calling for an immediate halt to admitting all people with non-immigrant and immigrant visas from seven countries—Iraq, Iran, Libya, Somalia, Sudan, Syria and Yemen—for 90 days. The order, referred to as a “Muslim ban,” caused disruption at airports around the world as hundreds of refugees and immigrants caught between communications between the White House and the Department of Homeland Security were stuck in limbo.

On Feb. 3, U.S. Federal District Judge James Robart issued a restraining order to immediately halt Trump’s executive order nationwide. An appeal was filed by the Department of Justice the next day, but three federals judges voted unanimously 3-0 to deny the DoJ’s bid for an emergency stay. This week, Trump expressed interest in filing an appeal to the decision.

For Pingala Dhital, who spent 18 years living in a refugee camp prior to being admitted to the U.S., the key is to remain positive.

“Everything changes,” she said, “but I don’t think this country will change. I believe in the law of this country, the Constitution and the government. It has a long history of helping people out, so I feel America is great.”