Be ready to boogie

Roosevelt Dime brings their unique sound to the Panida Friday, along with local favorites BareGrass

Roosevelt Dime got their start busking in New York City, playing for anyone who would listen in the parks, streets, squares, subways and beyond. Banjo player Andrew Green said it’s an experience that shaped how the band strives to connect with their audiences today. 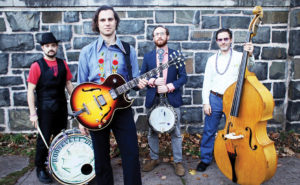 “(In NYC) you are hitting the whole walk of life. We wanted to see if we could connect to everybody and (make our music) resonate with everyone on some level,” Green said. “When that’s your approach, you can take it anywhere.”

“Anywhere” will soon include Sandpoint, as Roosevelt Dime will bring their eclectic mix of Americana and rhythm and blues to the Panida stage for the first time Friday, Oct. 12 with opener BareGrass. The show kicks off Pend Oreille Art Council’s 2018-2019 Performing Arts Series, and is produced in conjunction with Mattox Farm Productions. Green said the band has worked with Mattox founder Robb Talbott before.

“As far as we’re concerned, everything he touches is gold,” Green said. “We booked our tickets as soon as we could lock down a date.”

Roosevelt Dime’s unique brand of toe-tapping goodness is not easy to package in a single genre, Green said, because the band draws influences from every strain of historically American music with heavy hints of funk. He said while their arsenal may include a banjo and stand-up bass, the prominence of percussion in their music makes them different from a straight-up Americana outfit.

“‘Americana-rhythm and blues’ is the short answer because for years we just said ‘we’re into everything, man,’ and that’s not a good answer,” Green said with a laugh. “We are just making the music we want to hear.”

Roosevelt Dime’s last studio release was “Red Shoes” in 2016. For now, before they buckle down to complete another studio album, Green said the band is working on curating some live material for release. Green said live shows are where he and his bandmates are most “in their element.”

“When this group of four people get together, it’s always been about that shared live experience,” he said. “So for the time being, we figured let’s just keep sticking with that strong point and highlight it (with a live album).” 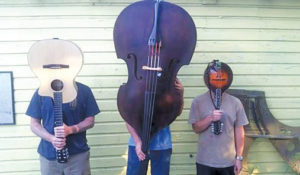 BareGrass, the opener at Friday’s show, is John Edwards, Jared Johnston and Luke Levesque — a trio of locals known to bring lively shows to Sandpoint on a regular basis. Edwards, who plays stand-up bass in the band, said their sound is hard to pin down.

“We kind of like to spread it all over the board,” Edwards said, noting the band brings bluegrass, blues, jazz, and singer-songwriter styles into the mix. “All three of us write originals and sing, so it brings a variety to our shows.”

Edwards said he and the other men of BareGrass are “always very tickled” to play the Panida stage.

“Music is just such a passion and such a joy,” Edwards said. “I feel we have stories and good musicianship to share with the community.”

Get tickets to see Roosevelt Dime and BareGrass play the Panida on Oct. 12 at Eve’s Leaves, Eichardt’s, at the door or online at panida.org. Adult admission is $20, youth is $10. Doors open at 6 p.m. and the show begins at 7.