Summertime, and the eatin’s easy

Just in time for the run-up to summer, a number of new local eateries — both brick-and-mortar and mobile — are gearing up to serve hungry locals and visitors alike. From subscription sourdough to barbecue to Greek cuisine, here’s a sampling of what’s on the menu.

From the owners of the Cowboy Pit BBQ in Oldtown (311 N. Idaho St.) comes the latest restaurant iteration at the south end of the Long Bridge. Smokehouse 95 will fill the space formerly occupied by the Long Bridge Grill and signifies its return as a barbecue joint. 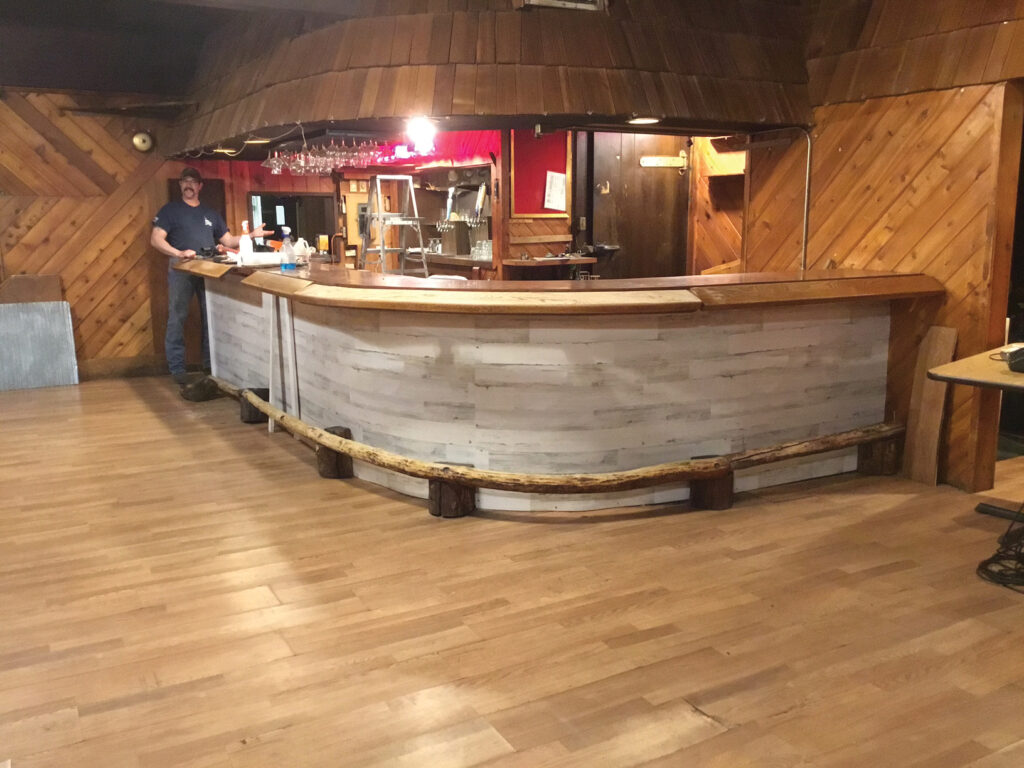 Longtime locals may remember Longhorn Barbecue, which predated the Long Bridge Grill and proved to be as popular for its food as it was for its signature sauces.

Smokehouse 95 owners Denise and Jim Teague, of Blanchard, are picking up that torch with an opening date tentatively set for Tuesday, June 15. As the space is undergoing painting and general sprucing up, the Teagues are also working on securing a beer and wine license, which may be issued after the opening.

Regardless, Smokehouse 95 plans to offer all the standbys of its Cowboy Pit BBQ counterpart — tender smoked meats, sandwiches, plates, platters, sides and “all the goodness of real BBQ” — alongside new menu items such as smoked prime rib, smoked salmon, fish and chips, salads and more.” Of course, Smokehouse 95 will use its own house-made rubs and sauces.

Denise Teague said the new business at the south end of the Long Bridge doesn’t mean Cowboy Pit BBQ is going anywhere — that popular Oldtown spot will remain in operation, as it has since 2017.

On the Teagues’ passion for barbecue, Denise (who grew up in the Silver Valley) said, “I lived down South for about eight years and my husband is originally from the South,” where they both “lived around barbecue and ate a lot of barbecue.”

In the meantime, the new restaurant is on a hiring blitz, looking for experienced cooks and waitstaff. To apply, contact Denise Teague at 935-933-7422.

Adia Burton’s new food truck, Opa! Greek Mediterranean Food, is serving a menu of Aegean staples such as gyros, falafel, hummus plates, Greek salads and the delicious honey-drizzled dessert baklava. Pretty much everything (including the tzatziki sauce) is scratch-made. 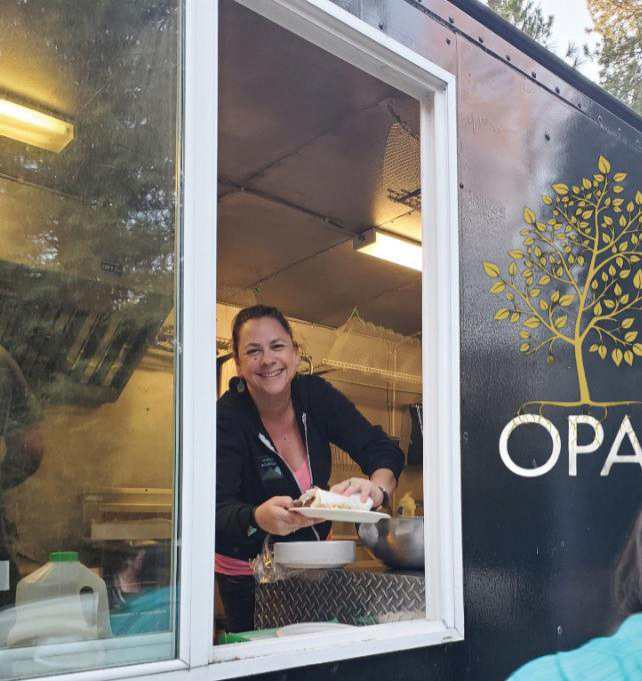 According to Burton: “Food has always been my passion and I was working in corporate America so long, I thought I wanted to do something for myself.”

More so, Greek food is a big part of her family history.

“I’m half-Greek; my mom is Greek and my grandma — my yaya, which is the Greek word for ‘grandma’ — would teach me her Greek recipes,” she said. “Based on that experience and the fact that there’s no Greek food in town at all, I decided this is what I wanted to do.”

Opa! started out as a pop-up, offering Greek fare at the Festival at Sandpoint, Beer Fest at Schweitzer and the Farmers’ Market. Then came the COVID-19 pandemic.

During the shutdown, Burton got to thinking about more firmly establishing Opa! The key was finding a truck, which she did from a seller in Hope and, after only a few months, she was up and running — most serving at MickDuff’s.

Starting Tuesday, June 1, Opa! will be parked alongside the popular Jupiter Jane food truck at Misty Mountain Furniture (502 Cedar St.), but also popping up at MickDuff’s, the Festival, Schweitzer and elsewhere.

Burton said she’s still working on setting up a website and social media accounts, so stay tuned. Meanwhile, she’s just enjoying connecting with customers as they find her.

“The vibe on the food truck is so fun,” Burton said. “That’s me and that’s what I love to do.”

Bread + Bones, a new company slinging homemade broth and bread in North Idaho and eastern Washington, is bringing the way we think about food back to basics.

“Bread + Bones is all about the wholesome transfer of energy into food,” said Jessica Carrington, who owns and runs the business with her husband, Paul. “We took two of the most ancient foods, bread and bone broth, and started making it here in North Idaho.”

Bread + Bones offers sourdough loaves and starter kits, as well as a rosemary and garlic focaccia — a large, flat, flavor-packed loaf perfect for feeding a crowded table. As for broth, the company offers chicken, beef and garlic shitake mineral broth. The bones used in the chicken and beef selections come from farms where animals are raised “naturally and ethically,” according to the Bread + Bones website. 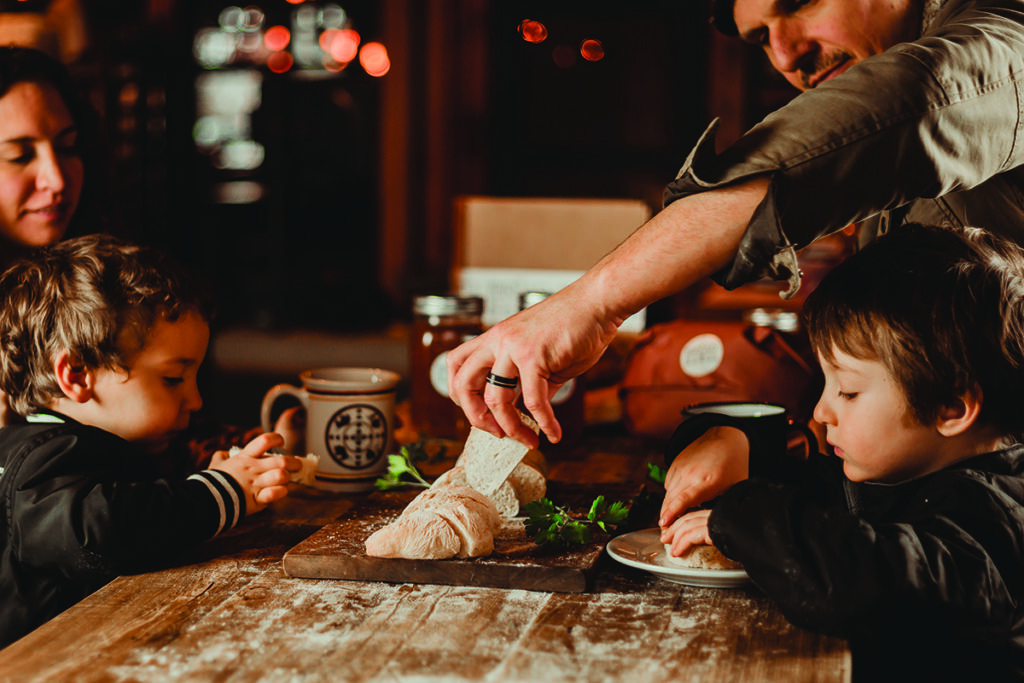 “We care about people, and think food is one of the most important expressions of love,” Carrington said, noting that she and Paul also own Black Caviar, a food company on the West Coast that caters backstage productions, concerts and festivals.

“We have been feeding people in over 81 countries for the last 20 years, and we are honored to be in North Idaho continuing our passion,” she added.

Bread + Bones’ bone broth is available at Winter Ridge and Miller’s Country Store, and will soon be available at Super 1 Foods in Sandpoint. Their broth is also sold at several locations in Coeur d’Alene and Spokane. Bread is delivered fresh each Friday to Huckleberry’s Natural Market and My Fresh Basket in Spokane, but can be purchased — along with broth — locally at the Sandpoint Farmers’ Market on Saturdays from 9 a.m. to 1 p.m. Bread + Bones also sells at the Athol market on Fridays, 2-6 p.m.

Anyone can order weekly bread and/or broth from the company’s website, and products can either be delivered straight to your door or made available for pickup in town. Carrington said Bread + Bones will deliver from Sandpoint down to Coeur d’Alene, and over to Post Falls and Spokane as well. Find the website at breadbones.com.

Carrington said Bread + Bones has plans to open a commissary kitchen in Ponderay by July, where they will also offer cooking classes.

“We are so excited to be in North Idaho,” she said. “After living around the world, this is truly heaven on earth.” 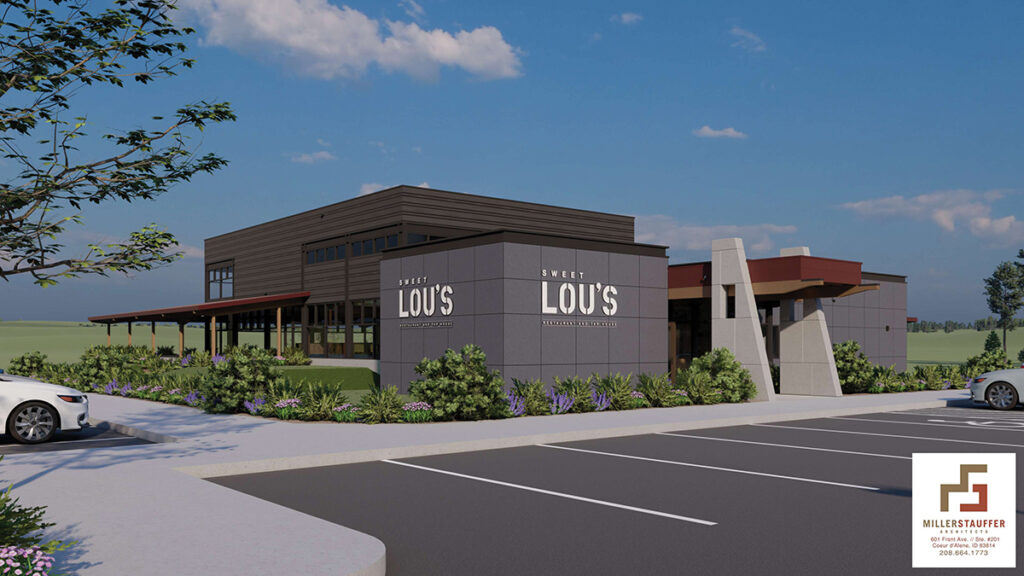 A rendering showing how the new Sweet Lou’s location will appear in Athol. Courtesy image.

Chad and Meggie Foust, owners of Sweet Lou’s Restaurants, have announced a third location in Athol at The Crossings, due to open in spring 2022.

Sweet Lou’s opened its first restaurant in 2011 in Hope. Over the years the Fousts have opened two more locations — one in Ponderay and one in downtown Coeur d’Alene — while the Hope location has since closed. Although the design of each location varies, the concept behind the business will remain the same.

“We serve American fare, family recipes made from fresh, high-quality ingredients,” Chad said. “We are known for having something for everyone and for always having the game on — whatever sports season it may be.”

The Fousts said that each Sweet Lou’s location is designed around a comfortable guest experience for the entire family.

“We want everyone that walks in the door to feel welcome,” Meggie said. “With this location being close to Silverwood and Farragut [State Park], we are hoping to attract guests of all ages.”

The Athol restaurant will have seating for 130 guests inside and 45 guests on the patio.

“We are looking forward to expanding our offering to our friends in Athol,” Chad said. “We hope to see everyone out there in less than a year.”