“The Nutcracker” is a cherished Christmas production all over the world, and Sandpoint is no exception.

For more than two decades, the Eugene Ballet Company has wowed local audiences with the athleticism and grace that only a professional “Nutcracker” production can bring. This year, locals can expect the same sophistication, the same attention to detail and the same sweeping emotion that has defined past productions. And local families can count on the same thrill of seeing their youngsters in the roles of mice, bonbons, angels and party attendees. 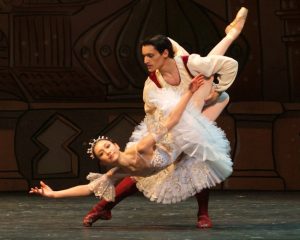 Eugene Ballet’s “The Nutcracker” will play at the Panida Theater on Monday, Dec. 12. Courtesy photo.

“We always sell out, so we encourage people to get their tickets as soon as possible, especially the families of the young performers,” said Hannah Combs, director of the Pend Oreille Arts Council.

A collaboration between the Oregon-based Eugene Ballet Company and POAC, “The Nutcracker” is a unique opportunity to see professional dancers performing a beloved ballet at the peak of their skills. The performance mixes company dancers performing key roles with local children in supporting choreography, which gives it both the polish of a professional production and the local fun of seeing a friend or family member on stage.

Speaking of the stage, it’s one of the biggest challenges about bringing “The Nutcracker” to Sandpoint, Combs said. But it also yields some unexpected benefits. The Panida stage is smaller than is usual for a full ballet production, which requires the creative team to adjust choreography and be mindful of space issues. On the other hand, the smaller environment lends the ballet a warmth that you don’t typically see, Combs said.

“I think it works really well, because you get a much more intimate show where the characters really pop off the stage,” she added.

Another challenge is readying local children for a variety of ballet setpieces. From the Christmas party to the battle between the Mouse King and Nutcracker armies to a trip to the Land of Sweets ruled by the Sugarplum Fairy, “The Nutcracker” is well-suited as a child’s first live theater experience.

Each year, the Eugene Ballet Company sends a representative to Sandpoint to find children up for the task. In September, local kids gather with the Eugene Ballet dancer, who evaluates their ability by leading them through a series of fun exercises.

“He makes a decision that day on which kids will be in performance,” Combs said.

Afterward, a local dance instructor works with the kids every year to make sure they’re prepared when the big day rolls around. It’s a very involved process, but thanks to guidance this year by Becky Lucas of DanceWorks Studio, Sandpoint kids are up for the challenge.

“They have a rehearsal once a week, so they’ve been hard at work all fall,” Combs said.

As for the Eugene Ballet Company cast, several old favorites are returning along with a few new tweaks. Yuki Beppu returns in the lead role of Clara, the girl who befriends the titular Nutcracker. Meanwhile, Eugene Ballet veteran Cory Betts takes on the role of the villainous Mouse King for the first time, while newcomer Colton West plays the Nutcracker.

“We might have a different flavor with two new actors in the fight between the Nutcracker and the Mouse King, one of the most intense scenes of the ballet,” said Combs.

“The Nutcracker” is one of POAC’s most popular and reliable annual fundraisers, so attendees can take pride in the fact that their ticket is funding local arts programs and education. The organization will also have work from its Kaleidoscope Program, an all-volunteer effort to bring arts education to kids, on display at its office next door to the Panida Theater. Be sure to drop by and see some of the work POAC has spearheaded in 2016.

See “The Nutcracker” at the Panida Theater Monday, Dec. 12. Doors open at 6:30 p.m., and the ballet starts at 7 p.m. Tickets are $30 for adults, $25 for POAC members or $12 for kids under 18. They are available at the POAC Gallery, Eve’s Leaves, Winter Ridge, and Eichardt’s Pub or online at https://artinsandpoint.org.