Sandpoint was among 87 Idaho communities to receive a failing grade in an Idaho Conservation League report analyzing the health of the state’s wastewater treatment systems.

According to the report, Sandpoint’s treatment facility reported 20 violations of its wastewater discharge permit. The violations indicate instances in which levels of bacteria, chemicals, toxic metals or other contaminants exceeded the standards allowed by its Environmental Protection Agency discharge permit. 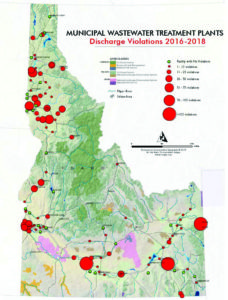 “Sewage plants are required to meet EPA’s water quality standards before discharging into Idaho waters,” said Austin Walkins, ICL’s senior conservation associate. “But when nearly eight out of every 10 fail to meet these standards, that means that the water we, our families, our pets and Idaho’s wildlife drink, swim and recreate in may seriously harm or endanger health.”

While Sandpoint received a failing grade, its infractions don’t hold a candle to the worst offenders in the state. According to the ICL report, Inkom topped the list at 161 violations. Hagerman followed with 133 violations. Driggs had 116 violations, Wilder had 95, Plummer had 74, Genesee had 71, Nezperce had 59, Kendrick had 50, Council had 48 and Worley had 45. Those 10 offenders accounted for nearly half the violations in the state, with the top three located in southern Idaho.

“Idahoans feel very strongly about their right to clean water for drinking, fishing and swimming,” the report reads. “Municipal wastewater treatment plants are really the front line for protecting water quality and human health. … Yet, just 24% of the sewage treatment plants reviewed for this report are operating without violating their pollution discharge limits.”

“Achieving 100% compliance with one’s NPDES permit is not an accident,” the report reads. “These communities deserve praise for prioritizing clean water.”

The city of Sandpoint already has a plan to address its wastewater issues. With the existing wastewater treatment plant strained by age and increased capacity demands, Sandpoint City Council members approved a plan to expand it over the coming years. The upgrades will dramatically expand capacity and meet the EPA’s latest purity standards.