The Straight Poop: Out of the Blue Eyewear

Where am taking my humans today?

A few of my well-meaning pack mates suggested that I get a pair of doggles (goggles for dogs) to protect my precious eyes when I’m riding in the convertible. News flash: I tried some and here’s the Straight Poop — they are uncomfortable, cumbersome and not a fashion statement! So I’m sniffing out some cool sunglasses like Ray-Bans, Oakleys, Maui Jims or Vuarnets so when we roll up somewhere, the ladies will say, “Now there’s a dog of mystery, especially when he’s obviously too cool to look at people properly in the eyes! 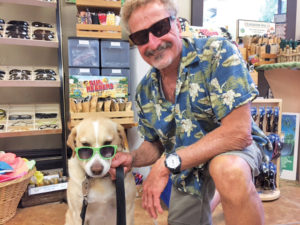 Steve Berenson and Drake try to find the perfect shades at Out of the Blue Eyewear at 104 S. Second Ave. in Sandpoint.

Wowza! The Missus and I pop into Out of the Blue Eyewear, located at 104 South Second Ave. Steve Berenson, owner and Wendy Brosnahan, manager and Jane-of-all-trades, are the eyes of this place.

There are so many non-prescriptive shades to choose from! I’m droolin’ over their own lines of reading sunglasses, sun readers, bright neon fashion crazy glasses, clear readers, kids sunglasses, eye wear retainers, fit-overs (not to be confused with clip-ons) and motorcycle goggles. Berenson even designed “weeding glasses” (note the play on words — reading glasses) for garden centers and botanical gardens and stores around the country. These babies were mega sellers on QVC. Insider scoop: Get a pair of frames here and take them to your eye doc and have your prescription inserted!

Berenson started in retail over 40 years ago in Baltimore. He was working with a friend who imported glasses from France and Italy. He fell in love with sunglasses and decided to form his own company, focusing on selling to boutiques, surf shops and bookstores in the area. Vuarnet glasses, named after France’s 1960 Olympic Gold Medalist ski racer, Jean Vuarnet, made their debut in the ’70s. They were the rage with surfers and skiers. The cat eye style was first (dang kitties always have to be first). Because of their popularity, (paws up — the Missus had a pair), Berenson came out with his own look-alike brand and sold them through his new company, Made in the Shade.

One day, Berenson received a letter from a company in California with the same name. They said that they owned the name and trademark for Made in the Shade. However, they didn’t have a trademark for eyewear. If Berenson wanted to dispute them, he would have to hire an attorney, show up in Cali and defend himself. His partner said, “This sounds like risky business, however, you always think of great names out of the blue.” The rest is history.

His most favorite dog was Molly, a pit bull lab mix. They played together for over 11 years. Seven years ago, just before he moved to Sandpoint, she crossed over the rainbow bridge. He spread her ashes over the mountains in Colorado, her favorite playground. He’s on the prowl for a new four-footed companion.

Out of the Blue’s original location was on Fifth Avenue, and now the mother ship on South Second Avenue includes a retail location and warehouse. The business reaches many stores and websites, and www.TheReaderStore.com is the website for consumers. Berenson is a very supportive member of our community, and contributes to many local organizations. The door is always open—walk right in try on the glasses, and dig up some awesome accessories for dogs and humans.

I’m so glad I sniffed out this place!  I got a few pairs — yep I’ll be able to wear my sunglasses at night. Be sure to bark along with Berenson and the Baldy Mountain Boys at Yappy Hour. Mark your calendars now to celebrate National Sunglasses Day on June 27 and my birthday with the Out of the Blue team. Party on!