With the Sandpoint Center under new ownership, local nonprofits are feeling the pressure from proposed new fees on its community room.

At the beginning of the month, California-based company Sandpoint Equities, LLC, announced its acquisition of the Sandpoint Center, the largest commercial building in town, from Columbia Bank. The new ownership may mean unwelcome news for local nonprofits, which have come to rely on waived usage fees for the center’s community room. 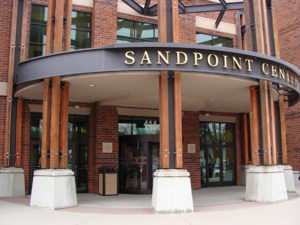 The Sandpoint Center at Columbia Bank in Sandpoint.

“These are non-profit rates and do not change regardless of whether or not food/beverages are involved,” the email reads.

For Dick Vail, president of the Kiwanis Club, those are additional costs that the nonprofit can’t afford. He estimates that the charges will amount to an additional $1,880 in annual costs to the organization. The expense  would burden fundraising efforts, which benefit local youth and elderly community members as well as Camp Stidwell. Vail said it’s especially aggravating many in the community donate significant time, money, goods and services toward the Kiwanis cause.

“When people are giving like that out of the community, I’ll be damned if I want to give nearly $2,000 to California,” Vail said.

Vail contacted Doug Eastwood, Kiwanis lieutenant governor for Division 48, to discuss whether clubs commonly paid for meeting space. According to Eastwood, that isn’t the case for any regional club, which instead typically meet at a restaurant that benefits from meal purchases.

“The nearly $2,000 per year you would be spending on rent is not worth it to stay where you are,” Eastwood wrote. “Fundraising is too difficult as it is without giving it up for rent.”

According to Ned Brandenberger, who is managing the property for the owners through Sandpoint Property Management, the fees have not yet been finalized. While Brandenberger said there is a real cost to people utilizing the space, they hope to find a policy that will work for everyone.

“(The new owners are) amenable to working with the nonprofits,” he said. “We don’t want people to say they’ll move somewhere else.”

However, other options may be opening if nonprofits are dissatisfied with the outcome. Di Luna’s owner Karen Forsythe said the business is offering breakfast, lunch or dinner meetings to nonprofits impacted by any changes, a service they previously offered to the Rotary of Sandpoint before the bank building was constructed.

“We currently host the Angels Over Sandpoint and The Injector’s Car Club, and Dick Vail from the Kiwanis and I are making arrangements for them to have their weekly meetings at Di Luna’s,” Forsythe said.

For Vail, the proposed fees are a disappointing consequence of new owners that, in the sale announcement, were said to be “committed to fostering local relationships and making a positive impact in the community.”

“It looks to me like we’re seeing the beginning of small-town U.S.A. atmosphere deteriorating,” he said. “We have never been charged for the use of the room for our luncheons, and the reason is everything we raise … we give back to the youth.”