Throughout history, there is one thing humans have done a lot of.

Love it or hate it, military tactics offer an introspective into human psychology, physics, math and the understanding and defiance of all of them. We can learn a lot from how we fight.

And even if we can’t, it’s pretty cool to hear about some of the zany stuff we’ve seen in history!

The Battle of Cannae, Aug. 2, 216 BC: In the midst of the second Punic Wars, one of the greatest and most challenging military maneuvers ever occurred during a battle between Hannibal of Carthage and Varro of Rome. 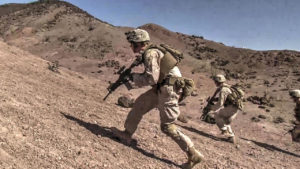 Hannibal was severely outnumbered, nearly two-to-one by a well-trained force of Roman legionnaires filled with surety of a swift, crushing victory.

Hannibal made a wide, thin line as Varro deployed a short, deep formation of soldiers that were tightly packed together, with the intention of shattering the Carthaginian center and dividing the army in half.

The Nazis faced a similar situation as the Romans in the Battle of Stalingrad in 1943.

The Battle of Thermopylae, August-September 480 BC: Ever since Frank Miller’s epic “300,” everyone knows this story, including the part where they kick that guy down a well.

Three hundred was a pretty poor estimate of the number of combatants involved on the Spartan side, however. Historical estimates put a more realistic number around 7,000, though most were not Spartans, but other tribes that volunteered to help.

King Xerxes of Persia was ravaging the Greeks, when King Leonidas decided to step up and intercept Xerxes’ army near an area called the Hot Gates (named for the hot springs nearby, not because everyone was wearing speedos and spray-on abs).

During Xerxes invasion, the only realistic passage into the mainland was through a straight that allowed only a few hundred men at a time to pass, as the sea flanked one side, and steep wooded hillsides flanked the other. This allowed the Spartan army to keep a group of their strongest warriors at the gap and hold it against a force that could only send a few hundred at a time.

The Spartans could have lasted as long as their supplies allowed, had they not been betrayed by a local named Ephialtes. Ephialtes’ actions immortalized him in the ancient Greek language, as his name was afterward used consistently to mean “nightmare” and “traitor”, similar to the use of Judas today.

The Battle of Arsuf, Sept. 7, 1191: After reading about this, I was surprised that I’d never seen this made into a major Hollywood blockbuster. During the Third Crusade, King Richard the Lionhearted was facing off against Saladin. Saladin had been a real pain in the neck as his armies would constantly hit and run.

Near the ruins of Arsuf, Richard knew it was do or die. They were at a critical point in the campaign where morale was starting to crumble, and it was getting harder to sustain the troops if they couldn’t get a foothold. Saladin knew Richard was getting desperate, and wanted to bait him into the open and smash his forces.

Richard told his knights at the front to hold steady under an endless hail of arrows. They were told not to budge and not to attack until they heard six trumpet blasts. Saladin hit them hard, trying desperately to bait the crusaders into the open.

The knights in the front panicked and charged against Richard’s orders, but he decided to charge anyway. His cavalry hit Saladin’s line with such force that entire lines of soldiers were flung from their horses and trampled, and the crusaders were hungry to get revenge for the hours of arrows that had plagued them. Saladin’s own personal charge was reduced to a little more than a dozen men, and he and his forces went into full retreat.

I can’t describe how awesome this must have looked from the Crusader’s side. A wall of cavalry charging into the fray, shaking the very earth beneath your feet and literally throwing your enemies into the air with the force of the impact.

There are tons of other unconventional tactics used throughout history. In the First Battle of Panipat, 1526 in northern India, one side fired cannons to startle the enemy’s war elephants, getting their own cavalry to trample them.

During the winter of 1795, in the Battle of Texel, the Dutch fleet was iced in by the cold. A French cavalry army came in and boarded ships without a single casualty, which remains one of the only times in history that a cavalry has captured a naval fleet.

Just before D-Day, the Allies tricked the Germans into fortifying farther north by building a giant fake army and navy out of junk and merchant ships, and leaked loads of false information for the German army to intercept. This was called Operation Fortitude. The Germans got their own digs in against the Allies later in the war, during Operation Greif, where German commandos dressed as American soldiers, used American tanks, and spread rumors throughout the American army about fake assassination plots.