Sen. Shawn Keough announced last year that this would be her last term serving District 1 as a state senator after more than 20 years, so the race is wide open. The first profile from this race features Republican candidate Jim Woodward.

1. Tell me a little about your history in North Idaho and how that makes you a good candidate as a state senator for District 1? 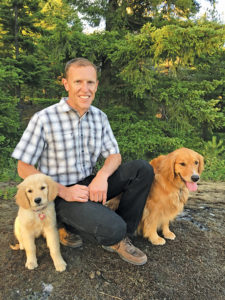 My family has been in this state a long time. Our family history goes back to 1908 in Elk River. One of my dad’s parents first made it out there as part of the Potlatch Corporation. We’ve been in Sandpoint since the early ‘70s and then up to Bonners Ferry. What people call the Pine St. Bakery I used to call home. That was our house in the early ‘70s.

My dad was a city engineer and administrator in Bonners Ferry. I graduated from Bonners Ferry High School in 1988, went to University of Idaho, then off to the Navy and came back because it was the right place to be.

2. Tell me about your experience in the Navy

I spent 21 years in the Navy total, a third in active service, and two-thirds in the Navy Reserve. I served on Trident missile submarines, was trained in nuclear power and nuclear weapons. I was trained to operate a submarine as well.

3. Shawn Keough has served District 1 as State Senator since 1996 and endorsed you for this race. What do you think of the legacy she has left for North Idaho, and how do you plan to fill her shoes if elected?

Senator Keough has set the bar high for public service. I’ve only known her for a year now, but I’ve had the opportunity to observe her actions and leadership for many years. She is widely respected throughout the community and in Boise because of her willingness to listen and her tireless effort in making things happen for Legislative District 1 and for the state. I understand the significance of open communication with members of the district and listening to all sides of a conversation when we’re making a statewide decision.

4. You list education as a pretty big part of your platform. We’re generally next to last in the nation as far as funding per pupil on the federal level. Is there any way to help increase funding for education in Idaho?

I think we need to take a hard look at it. We’re in a paradigm where a big portion of our funding used to come from federal timber sales, but those have dropped off significantly in the last 30 years. And we haven’t stepped back and said, ‘We’ve lost this, it was our source, how do we deal with that?’ It’s a long-term goal.

I’m a pragmatist, not an ideologue. I think the closer we keep decisions to home, the better decisions we come up with that match the situation. A blanket decision across the whole country might not be the best for us. But I know as a business owner, the only way you get paid is you accomplish something.

6. Politics has always been a rough and tumble arena, but the last couple years, it’s become very polarized. Does that concern you, or is that why you’ve become involved?

That’s definitely part of the reason I want to be involved. I think we’re headed down the wrong path when we become so divided or so polarized. We should use our system of government to establish the basics for how to get along. The role of government is to take care of the tasks we can’t accomplish individually. … The divisiveness we’ve seen in politics hurts us, it doesn’t help us. I think that’s why we see fewer and fewer people interested in being involved. There are people who are there because of an ideology, not because of an interest to figure out how to work and live together. It’s part of the reason I’m asking to serve as a state senator. I see a need.

7. Let’s talk about your business career after your service in the Navy.

I own Apex construction services, and we’ve been in operation since 2008. I proved that you can start right during the middle of the Great Recession. We just focus on getting done for people what they ask for. My in-laws own a small business, and they told me, being successful in a small business is simply letting people know what you can do and when they ask you to do it, follow through and get it done. And that’s what we’ve always done.

8. You’ve also listed transportation and infrastructure as an important part of your campaign platform? Why are those important issues to focus on?

It’s a part of our economy. Whether we’re working or playing, to be able to travel and do it in a reasonable amount of time. The population of Idaho (is growing). That places extra demand on the infrastructure, both the recreational and work aspect of it. So it’s not just a matter of maintaining but we have to increase our capacity or we’ll get to the point where it’s not pleasant to go anywhere.

9.  Where do you fall on the following issues? The HiTest Silicon Smelter proposed for Newport, Wash.?

There’s a process in place for permitting that. We need to follow that, and part of it is public input. … I went to the forum at Newport and I know Idaho DEQ is engaged in it, but it is outside our political boundary. … I’m open to hearing the discussion.

I’d like to see that ground protected for future generations, and wilderness designation may be the correct way to do that, but we need to remember that wilderness designation comes through an individual bill, it doesn’t have to be the boilerplate Wilderness Act. When you look at the Frank Church Wilderness Area, it has air strips in it. That’s an example of an exception. So when that individual piece of legislation is written, we can take into account needs that are specific to Scotchman Peak Wilderness, which in this case involve wildfire management because it’s so close to Clark Fork and wildlife management. With a properly crafted piece of legislation, we could protect that area for future generations.

10. In recent years, it seems the Republican party in Idaho has retreated to corners where one side has gone further right and the other side, 20 years ago, which would have been considered staunch conservatives, are being labeled as “RINOs.” How do you see that effecting this race?

I’ve already been labeled as a RINO. My response to that is, I’m not an INO, which is an Idahoan in Name Only. I present myself as I am. I’d like to represent the people of Idaho and all of the people of the district. So I probably fall in that camp of what would have been, in the past, a conservative Idaho Republican. I’ll stay true to my roots. … My day to day efforts will be focused on what I consider my platform: education, infrastructure and providing opportunities for people to live and take care of themselves. At that same time, I’ve always worked toward bringing people together. When people ask, ‘Why are you interested in joining politics?’ I say, “I’m not interested in politics, I’d like to serve in public decision making.’ That’s the message I’d like people to know. We can take some of the drama out of it and take care of our representative system of government.