Future of Lost in the ’50s in limbo 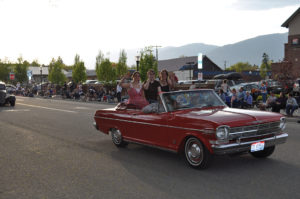 The Lost in the ’50s car parade in Sandpoint. Courtesy photo.

A post in the Sandpoint Local Forum Facebook group on March 11 created a firestorm of concern over the future of the annual Sandpoint event Lost in the ’50s. The post claimed that founder and organizer Carolyn Gleason, longtime owner of Second Avenue Pizza, had officially announced that this year’s Lost in the ’50s — the 35th annual — would be the last.

The post garnered more than 100 comments, most expressing shock and dismay at the so-called announcement. Some offered ideas for fundraising, moving the car show and even transferring organization of the event to another entity, such as the city of Sandpoint.

For Gleason, it’s an announcement that’s been in the making for some time, but that also has been blown out of proportion.

“I have said for years: ‘I will do this until I cannot do this, but I have to have enough money,’” Gleason told the Reader.

Gleason does not want to name names or call out any specific industry for the rising cost of putting on a multi-faceted event such as Lost in the ’50s. She said she has always been transparent about the event’s large price tag, which she covers primarily with an annual breakfast fundraiser, T-shirt and ticket sales, car show registrations, and a rapidly shrinking pool of business sponsorships and donations.

As far as whether this year’s Lost in the ’50s — slated for May 14-16 — will be the last, nothing is set in stone. Gleason said she currently has no plans to cancel the 2020 event, but that could change as the event grows closer, considering the current COVID-19 guidelines and other factors outside her control.

She said people have been calling all week asking whether the event will happen given the current novel coronavirus outbreak.

“Everything is kind of up in the air,” she said.

Looking ahead to Lost in the ’50s in 2021, Gleason said the closure and remodeling of the Best Western Edgewater Resort and possibly the former Quality Inn on Fifth Avenue — currently not in operation — would make hosting a massive Sandpoint event nearly impossible.

“It’s circumstances — you don’t have all the answers,” she said.