“First of all, we have to appreciate what the Reiners do,” said Charlie Glock, who has lived in Sandpoint since 1989. “It’s an amazing gift to the community that they have been doing all of these years, without any compensation.”

Glock began singing in the Pend Oreille Choral when Mark and Caren Reiner started the group in 1994. 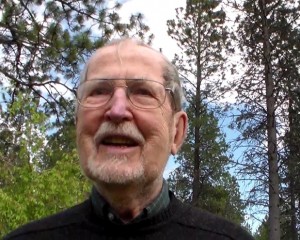 Charlie Glock reminiscing about his performances at Carnegie Hall. Photo by Jodi Rawson.

Glock was born in 1919 in New York. While the community choir is filled with elders, nobody is near Glock’s age of 96.  Many of us watch in awe as he skillfully parks his car and walks with fine posture to practice once or twice a week.  He loves to sing and has been an active choir member since college, singing in the “NYU glee club, the Boston University glee club and the New York Oratorical society…  so I have sung three times at Carnegie hall, which is not very usual,” he says with a sly grin.

Glock’s favorite piece is “no doubt, ‘Handle’s Messiah’,” which he has performed several times. The choir is scheduled to begin practicing his favorite piece this Autumn for the upcoming winter concert.

On the other side of the equation, Max Reed just turned 13 years old on his last day of seventh grade at Sandpoint Middle School. He excels in school, getting good grades and playing clarinet in the school band. Violin is the instrument that he is most invested in, however, but the school band doesn’t offer this. As a result he is a member of the following three orchestras: the open orchestra with the Music Conservatory of Sandpoint (as a helper), the advanced chamber orchestra with the MCS, and the very, very advanced “Reiner’s Orchestra,” where he is the youngest member. 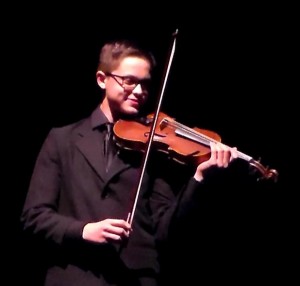 Reed has been playing the violin since he was seven years old, beginning two years after his older sister, Nichol, began. Nichol Reed just received the local Distinguished Young Woman Award and is a great inspiration to Max. Both of them study violin under Ruth Klinginsmith, co-founder of the Music Conservatory, and they are very fond of her style and teaching methods.

When asked what his favorite piece in this spring concert was, Reed replied, “I like the Mozart,” but his sister looked at him with big eyes.

“Really?,” she asked as though he were a little crazy, “What about the Schubert piece?”

This began a classical quibble—a rather comical disagreement between musical siblings.

The Pend Orielle Choral and Orchestra features the young and the old (and all of those in between) performing June 17 at 7 p.m. and June 19 at 3 p.m. Both performances will take place at the First Lutheran church, 526 S. Olive St.

Our members attend all sorts of different churches or none at all, but we gather to become one, practicing and performing at generous church host locations. We are performing part of Mozart’s final composition, “The Requiem,” as well as a piece written by Mark Reiner himself, so the compositions themselves vary a great deal in age and style. As always, this concert is free and open for all to come listen and be uplifted.