Editor’s Note: Recent graduate McCalee Cain has interned for the Sandpoint Reader for two summers. We’ve really enjoyed having her voice and work in the paper. Recently, McCalee contributed a series of articles highlighting plans and dreams for recent high school graduates. We thought we would turn the tables on McCalee and feature her for our final profile of graduates.

We thank McCalee for the hard work she’s put into the Reader and wish her luck in the future. We’re fairly certain she’s going to do great things in the world.  -Ben Olson 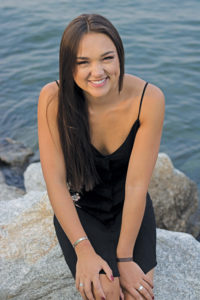 Though the first ever Hope Elementary School newspaper never came to fruition, the recent Sandpoint High grad never stopped striving to be a part of impressive firsts. Next month, Cain will start her freshman year at Seattle University as a Sullivan Scholar — one of nine students in the entire freshman class to boast the title, and the only student ever from Idaho to earn the status.

She said she plans to study communications with a specialization in journalism.

“But that’s totally subject to change,” she admits. “I’m flirting with other majors, but journalism will likely play into whatever I do.”

Cain said writing and storytelling always came naturally to her. She joined the Cedar Post in high school, and by her senior year — when she was editor in chief — it had grown into a full-blown love affair.

“I realized that not only could I tell the stories I created in my head, but I could also tell stories that were actually happening,” she said.

Cain has spent the last few years immersed in that storytelling, both at the Cedar Post and the Sandpoint Reader as a two-time summer intern. She was the first reporter to break the story when racist propaganda-filled CDs were left on SHS students’ cars back in December. That instance has been become part of a larger narrative of North Idaho racism reported about on the national level, and the first journalist on the case was a 17-year-old who had just wrapped up taking photos at a basketball game.

“I didn’t expect it to be a huge deal, which is pretty depressing considering the (topic),” she said. “(Breaking the story) was definitely a confidence boost.”

When asked who she is outside of her academic and career goals, Cain said it’s hard to separate herself from her ambitions.

“I spend so much time doing that that I don’t even have a separate personality,” she said with a laugh, adding later that journalism suits her other interests well. Those other interests include politics, music and food.

“I have a myriad of dream jobs — a wide collection of them I often peruse in my head,” she said. “I really love the idea of majoring in something broad that I can apply in a lot of ways in my life.”

During her time at Seattle U, Cain said she hopes to be active at the college radio station and brush up on her French-speaking skills in order to study abroad in France and possibly Africa.

Despite her self-made achievements, Cain said she knows younger generations are often judged as privileged in today’s world. It’s an assumption she finds dated, she said.

“That’s a narrative that’s existed forever and will always exist, but I think it’s completely wrong,” she said. “I think my generation has a unique, unprecedented set of hurdles in front of us.”

Luckily there are youths like Cain ready to address those hurdles as a leader of the new age.

“My approach to leadership isn’t one of perfection, but rather of innovation, driven by the utter audacity to be vulnerable in standing up for what I believe or creating new things, even if I don’t know if I’ll succeed,” reads her Sullivan Scholar application. “I strive to impart the merit of unabashed effort sans regard of failure with my actions, not merely with my words.”