My youngest son, Enoch, is an animal whisperer and he insisted that we rescue a bird one evening. Thinking that it was injured beyond repair and would merely break our hearts, my husband and I groaned. But Enoch is a natural leader and his will usually wins. It was a baby robin with flapping little wings — unable to fly but also uninjured. Baby robins have a calico look to their coloring to camouflage them from predators, but three-quarters of them still die before adulthood. 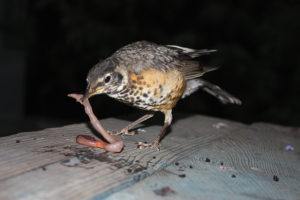 Enoch named him Rick (from “Rick and Morty”) and we brought him inside to protect him, but we were not very successful about getting anything in him that first night. I admit that I didn’t know anything about keeping Rick alive, but I read a little that night and learned that if a robin comes into your life it is a sign of good luck.

Rick was weak and listless, but alive. I had to gently pry his beak open and put a mealworm way back in his throat, where he eagerly swallowed. Opening his mouth took several failed attempts and all of my meditative calm — again, again and again.

My life began to revolve around Rick. My son rescued him, yes, but I had to keep rescuing him — every hour. I let the family go without me to the park to listen to the Festival at Sandpoint.

There is a sort of simple bliss to it. I lost sleep over Rick. I lost my thoughts, time and resources to Rick, but I knew my purpose and value.

For dinner, Rick swallowed his first earthworm, which was as long as he was.

We took a trip to Spokane where Rick met my youngest relatives for my aunt’s birthday. The tiny girls, with their tiny voices, held Rick in my grandma’s backyard. On the drive to Spokane, I pulled over to feed Rick at the Rathdrum park. I found a book from the park’s mini free library and read it that night in my grandma’s house, where I have been sleeping since my earliest memories. My 90-year-old grandma has always adored watching birds. Around Rick she was a little girl, talking to him adoringly, but she shook her head shyly when I offered to let her hold him.

Rick began to talk and open his beak eagerly when he was hungry, which made my life easier, and I worried less about whether he would make it. Having a will to live is more than half the battle. His down baby feathers were almost gone and his flight feathers were long. He cost $3 a day (in worms) most of the time he roomed with us (my dry ground only kept up the first two days).

In the dark morning I opened the cage and Rick flew onto my shoulder. “Oh Rick!” I laughed and laughed. I never felt luckier. Rick could fly horizontally and I tossed him up in the treetops where he spent his days. I felt guilty putting him into his cage at night, but I was terrified for his life. He had to be rescued a dozen times from the ground.

A giant bubble protruded from Rick’s right side-an air bubble larger than his head, beneath his translucent skin. He was eating fine and seemed himself, but his success at flying declined because he was painfully asymmetrical.

I held Rick on his back while my husband punctured the air sac with a sterile needle, deflating the air that had accumulated beneath Rick’s skin (we learned this on YouTube). Then I massaged him and he ate and rested for a couple hours before flying again. We hoped that this injury was a lesson and a wake-up call. Be safe, Rick!

Rick couldn’t be found at night. I lay in bed restless, worried for Rick and my growing children.

Rick returned in the morning and my husband and I laughed and said, “Oh, Rick,” endearingly, over and over. He had been eating blueberries on his own for more than a week, but I hand fed him a couple of times. At this point, Rick cost less than a $1 a day in worms because he was hunting little bugs right before our eyes. I threw down a worm and he pecked the wiggle out of it before gulping it. I hand-fed him for nostalgia at this point, and Rick looked at me the way my oldest son looks at me sometimes: “Geez, I’m not a baby.”

Immediately after Rick ate, he ran to the edge of the roof and flew up, grabbing branches with ease. He had been showing off his flight skills for days. Sometimes I felt like I was flying. He was higher than me, wilder and more aloof. Sometimes he willingly walked into his cage to sleep, and he would still answer back to us and swoop down at our feet where he nibbled blueberries.

At the crack of dawn, I pet Rick and watched him eat a worm, as usual. My husband spoke with him from the rooftop bench, but we didn’t say goodbye because we didn’t know — it felt so natural, like Rick would always be there to talk to us on the roof.

I called for Rick and I thought I heard him, soloing above the symphony of birds, a hundred feet high, living a life I can only imagine and envy. I called again, and he lifted off directly over my head and joined the rest of the musicians.

Editor’s note: If you find an injured animal in the wild, please contact American Heritage Wildlife Foundation in Clark Fork at 208-266-1488.