A bright side of this pandemic has been embracing new talents that might not have been possible if we weren’t all spending a bit more time at home. Music stores have recorded high sales across the nation over the past few months, as more and more people are finally making good on their intentions to learn how to play an instrument. 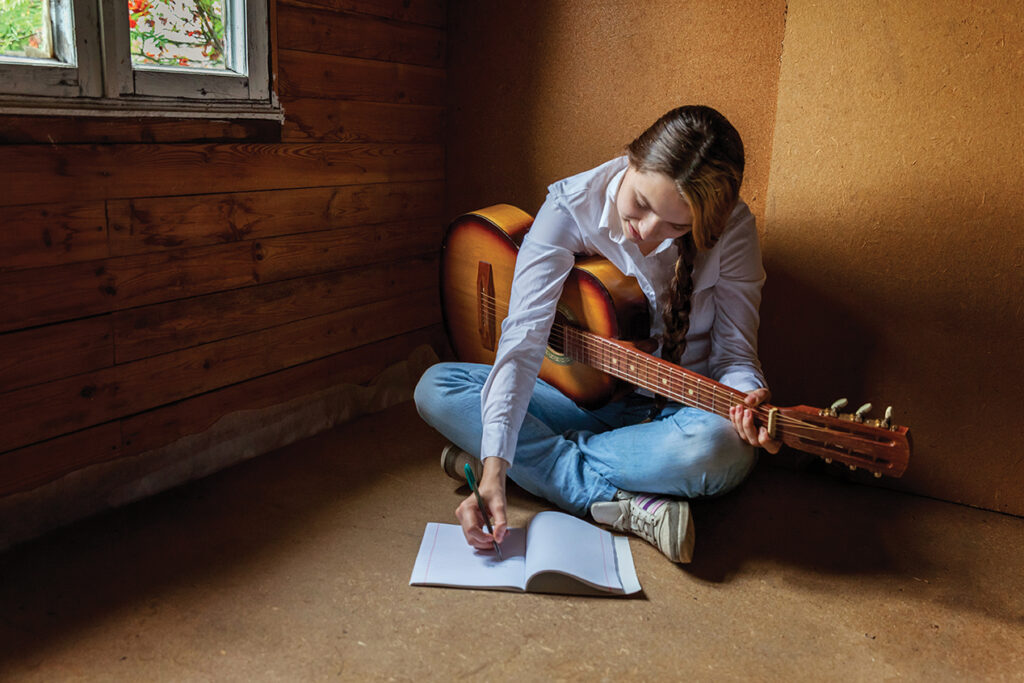 Writing a song can be one of the most rewarding activities. Stick with it. Courtesy photo.

Establish a concept, but don’t marry yourself to it

Some songs are centered on a certain concept, be it love, war, anger, inequality or otherwise. The problem with this idea, in my opinion, is that songs shouldn’t be too descriptive. People who listen to your music shouldn’t necessarily know exactly what you are talking about. Let them find it on their own and they’ll love you more for it.

Embrace the conflict of ideas

Tom Waits has a songwriting technique that deserves to be repeated: He listens to five radios at a time, all playing something different, and then picks out interesting overlaps for his own purposes. This is, in a word, brilliant. Songs are essentially poems set to music, so there should be an emphasis on word craft and an interplay of concepts that may not normally be associated with one another.

It can be quite an interesting experiment to cram two dissident themes together to see what shakes loose. I wrote a song years ago about an incident that happened in Canada where a Greyhound bus passenger flipped out and decapitated the guy sitting next to him for no reason. It was macabre subject matter, but I married those lyrics to a warm ballad that contrasted completely with the story. If you didn’t speak English, you would have no idea I was talking about a murder that occurred on the Canadian tundra. It was this merging of ideas that intrigued me, and even though it’s a song I have since cast aside, I still like the way it was put together.

This goes against the lexicon of popular music, which is buttressed by a legion of poorly written songs full of trite, meaningless lines. But I’m sticking to my guns, because rarely does a true musician yearn to write a bubblegum pop song that appeals only to 13-year-olds.

If the thought you are trying to express is a cliche, try to flip it on its head. Want to write a song about your significant other? Instead of writing, “I’ve never met anyone else like you before,” try something weird, like, “All of those I met before were missing your eyes,” or “I thought I knew love’s game until I saw you.” Strive to craft your words in a way that they may not have been expressed before. Cliches stick out in songs and can ruin it for your listeners.

It doesn’t matter where you start

Some songwriters claim they always write the lyrics to their songs first, then the music. Others are the opposite. I go back and forth. Often, I’ll hear a line that captures my attention. I’ll chicken scratch it on the nearest piece of paper, returning to it later to expand the concept into something more. From there, I’ll marry the words with music. Other times, I’ll play around on my guitar and come up with a unique combination of chords, then hum along a melody until I have an idea of what the lyrics will sound like, then write lyrics to fit. Use whatever method works the best for you.

Have fun; be inventive

Writing songs is hard work, but that doesn’t mean it shouldn’t be fun. If you hit a wall and are unable to express a particular emotion, make up words. Have fun with it. You’re in charge. If you have to invent a word, do it. While playing live, I’ve often substituted lyrics that are completely nonsensical just to see if anyone is paying attention. Most of the time, they aren’t.

Best of luck on your songwriting journeys. If you get stuck and need a jolt, my final piece of advice is to just sit and look out the window until something comes to you. Could be a bird alighting on the tree by your window, or the funny way your neighbor struggles with his lawnmower. The world is full of songs waiting to be written. Go out and get yours.

Ben Olson plays in the band Harold’s IGA. To hear examples of his own songwriting, visit haroldsiga.com.

Tags: how to write a songsongwriting tips