Why is this important? Some people who come into contact with the insect — while picking huckleberries for instance — may experience allergy-like symptoms, such as itchiness. But the outbreak also has potential to defoliate large patches of vegetation across forests in the area. 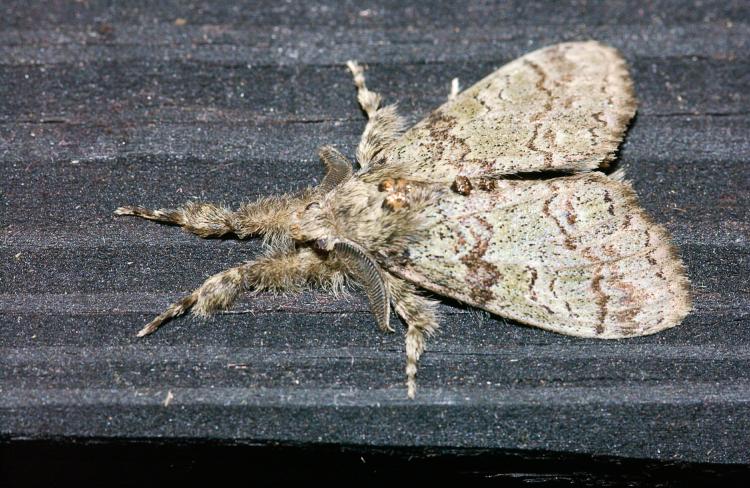 “Patches of Douglas-fir tussock moth defoliation are scattered through Shoshone County with some patches visible from I-90 near Lookout Pass,” said Forest Service Entomologist Gina Davis. “Entomologists with Idaho Department of Lands and the U.S. Forest Service coordinate monitoring for this insect. This fall we will gain a better idea of the extent of defoliation using remote sensing techniques and of the expected defoliation for next year based on adult trap catches and egg mass surveys.”

Allergic reactions from tussock moths are called “tussockosis.” Tussock moth caterpillars, egg masses and cocoons are hairy. Their hairs, or setae, have a harpoon-like barb at the end. This allows caterpillar hairs to become lodged in skin and in some cases cause dermatitis. In rare instances, more serious allergic reactions such as shortness of breath and wheezing can occur. Most commonly people complain of itchiness.

Specialists recommend wearing long sleeves, pants and gloves when working near an outbreak, and people should consider wearing face masks, as well.

The current outbreak is part of a natural cycle that repeats itself every eight to 12 years, on average. The outbreaks can occur anywhere the preferred host species grow; however, defoliation tends to occur in the same general areas as historic outbreaks.

In North Idaho, outbreaks regularly occur in Latah, Benewah, Idaho and Kootenai counties. Outbreaks usually last two to four years and produce three years of defoliation before natural controls, such as predators or parasites, cause the outbreak to collapse.