One room to school them all

Scrambling onto his brother’s shoulders and waving his arms wildly in the air, he knew he could catch the teacher’s eye. Spotting the young boy above his peers’ heads, his schoolmistress knew he was going to be one to watch — and probably discipline — regularly. But she couldn’t help but be charmed by his huge grin, and she said briskly, “Very well, off you go!” He ran into the belfry and leapt for the rope above his head. His feet left the ground as he swung back and forth, the bell ringing out the inaugural peals of the newly built one-room schoolhouse. 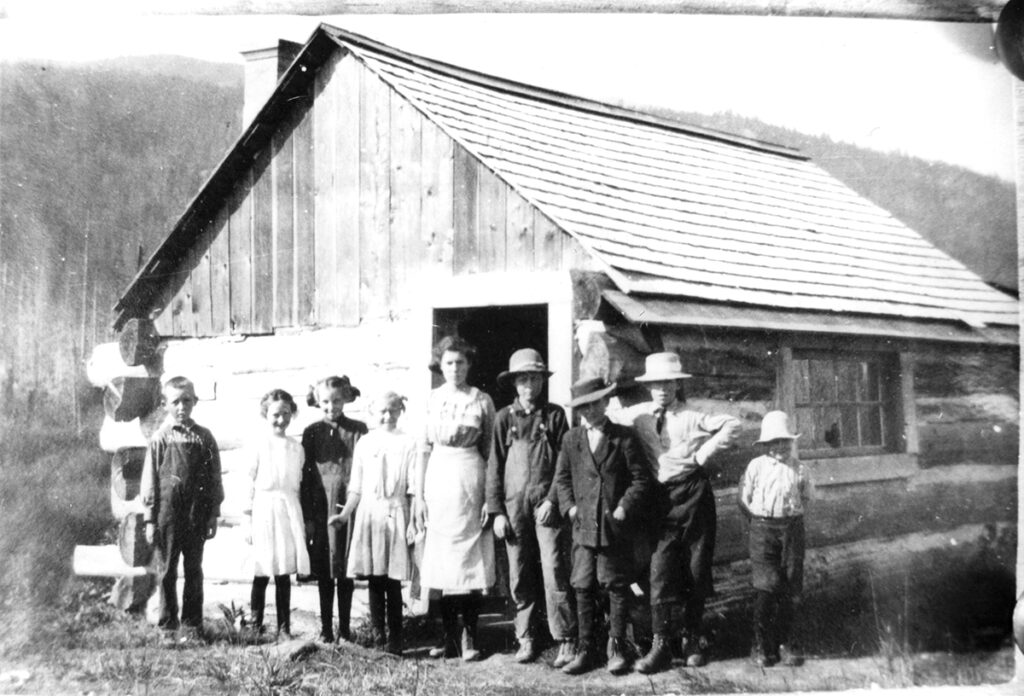 The original Bronx School in 1913. A group of children stand outside the log building with a shingled roof. Photo donated to BCHS by Henry and Betty Lunn.

As students enter their classrooms this year, much is up in the air. Some students may see only the 20 or so students in their immediate class throughout the day, even eating lunch in the classroom. As they navigate this new “normal for now,” we’re exploring the original self-isolated education: the history of the one-room schoolhouse.

At the turn of the century many families homesteaded and lived far from any town, but they valued hard work and cared that their children received a proper education. The roads to town were rough, long and — especially in early Bonner County — not always passable. But if you had at least six students, found a willing teacher, had a tax structure to support the operations and a proper building, you could petition to be granted a school district status.

Homestead families chipped in to build the one-room schoolhouses that dotted the countryside. Volunteerism seemed natural and necessary.

One might think they built log cabins, and a few were in the late 1890s. But this was lumber mill country, and getting milled wood was an easier way to build. Many of the early schools even featured small bell towers to announce the start of school. School buses didn’t drop off students promptly before class, so getting there meant a long trek through the woods and fields, along the railroad tracks — sometimes even crossing a stream on a fallen log.

For the teacher and students alike, a “commute” could be between one and six miles. The lucky ones had a horse, and some relied on their neighbors. Schools built stalls for the horses and hay. Later, some entrepreneurs rigged horse-pulled wagons to provide a fee-based “school bus,” transitioning to a sleigh in winter.

River crossings created extra challenges. Delta Merritt was known for crossing the Pend Oreille River every week on horseback to teach music to students on the south side of the river. Ed Hamshar ferried students across to the Priest River school on a “cable car” in the 1920s.

One retired Sandpoint teacher taught at the Cabinet School in 1951 just before it was consolidated. She lived at the provided onsite “teacherage” but would flag down the train or bus to visit family on the weekends. To get to the bus, she would have to walk across the swinging footbridge that crossed the Clark Fork. When the wind would blow, “the bridge would get to swinging so hard you had to hang on for dear life.” 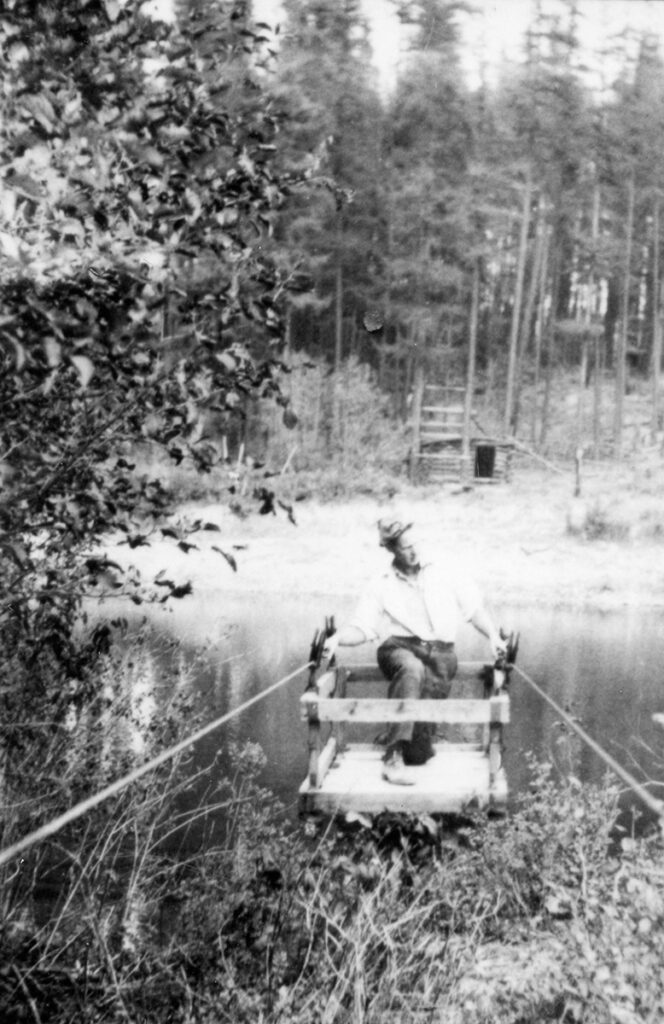 Ed Hamshar on the cable car on Priest River. The car was used to cross Priest River School (Peninsula) children to school in about 1925. Photo donor unknown.

If a school had enough taxation and foresight, a teacherage was built next to the schoolhouse. The tiny abodes made it easier to attract teachers, who were often single women moving here straight out of teachers college.

One teacher in the 1930s recalled taking the train with her cousin for her first teaching assignment in North Idaho. Her cousin, a seasoned teacher of three years, said that her dream used to be to teach what she wanted to teach. Now, she said with emphasis, the goal was to teach where she wanted to live.

But being a teacher in these small schools was not for the faint of heart nor the lazy. They taught all ages and all subjects. Teachers arrived early to fire up the stove that sat in the middle of the room and hauled in water for washing and drinking — sometimes from sources up to half a mile away. At the end of the day, they swept the classroom, split wood for the next day, cleaned the chalk erasers and blackboards, and began lesson planning. After doing all this through a harsh winter on their own, it’s no surprise that many teachers got married and left their positions rather than come back for a second year.

In the Priest Lake village of Nordman, the school district fell below the required threshold of six students when one family moved away. Eager to stay open, school leaders advertised for a teacher who had at least two children. It took two years to entice one, but because they were willing to break the unwritten rule that teachers could not be married, they were able to continue educating in one of the most remote parts of the county.

Schools have always been at the heart of our communities. Their desks were often pushed to the perimeter to make room for Saturday night dances, Fourth of July celebrations, school programs, Sunday school, picnic socials, election polls, even weddings and funerals. The neighbors counted on this sense of togetherness in a rough environment.

These gathering places resiliently stood for decades, and some still do. Near Elmira on Highway 95, you can see a one-room schoolhouse built in 1910, its cement walls perhaps a response to the “Big Burn” that consumed more than 1 million acres in Idaho and Montana.

Yet, many of the original schools are lost to the ages. Historical records suggest that most of the school bells, once rung so enthusiastically, were melted down to aid in World War II supply efforts. In the 1950s, thanks to improved roads and the advent of school buses, the state of Idaho decided to consolidate schools and do away with the small, rural buildings. As the buildings came down, families reclaimed scraps of wood from the walls that their fathers had erected.

Going to school in a one-room schoolhouse was rarely comfortable or convenient, but rural families did what was needed to bring learning and community to our children. As we enter a semester of learning that will surely be uncomfortable and inconvenient at times, let’s find inspiration in our resilient past and make the most of these trying times. In a hundred years, what a story we’ll have to tell.

Brought to you by the Bonner County Historical Society.