Why (and where) we find solace in limey boob tubeage

As George Bernard Shaw quipped, “The British and the Americans are two great peoples divided by a common tongue.” Yet, the official UK opinion polls put Queen Elizabeth II — aged 94, the longest serving monarch in world history — with at least 78% approval. In the U.S., she’s met with 69% approval. Look no further than Americans’ love for the Netflix series The Crown to see just how unreconstructed we are when it comes to monarchy. Britishness is in this nation’s bones, which makes it so satisfying — if not fraught — to indulge in a bit of televised anglophilia. Here are two of our favorites (or favourites): 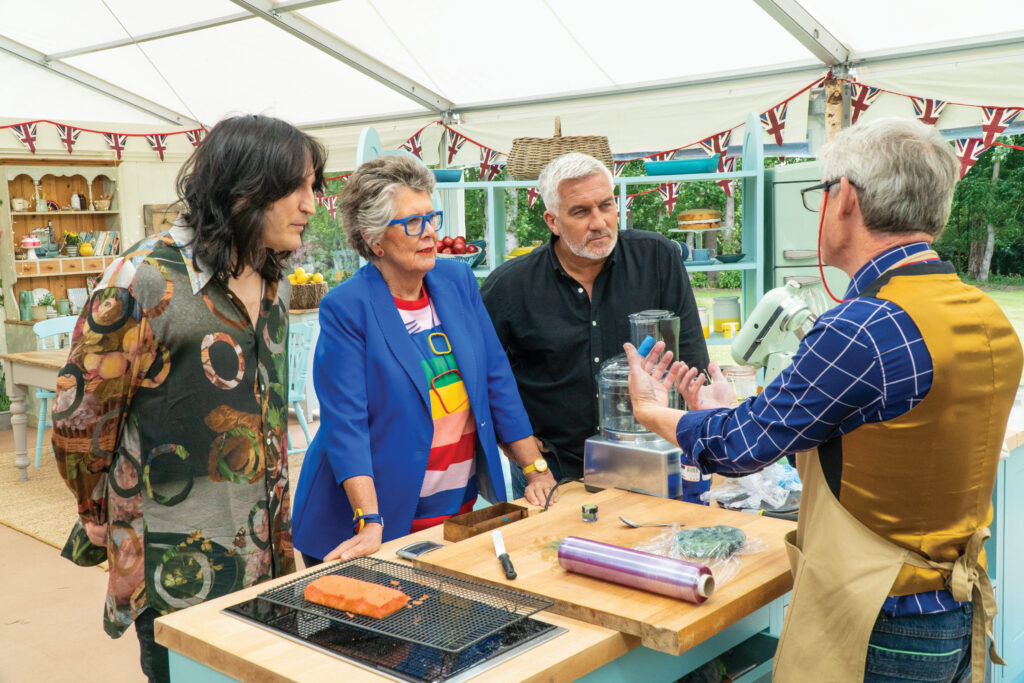 Hosts from The Great British Baking Show talk with a contestant about their work of confectionary art. Courtesy photo.

Like most Americans with Netflix subscriptions, I got into The Great British Baking Show sometime in the early stages of the pandemic. My best friend, fresh off having a baby and stuck at home, suggested I try it. Soon, our phone calls explored the merits of a successful short crust and the challenges of Bread Week. We discussed our favorite contestants and what pastry creations we might consider making in our own kitchens.

One thing became clearer than a perfect mirror glaze: TGBBS was a welcome distraction and effective sedative amid the stressors of the year.

As for the premise, a dozen ametuer bakers compete in various baking challenges inside a massive, white pole tent in the British countryside. Two staunch but good-hearted judges and two quirky hosts roam the pastel-colored kitchen stations as contestants navigate the fickle world of meringue and caramel, creating bakes to match the week’s theme. Each episode, one is crowned Star Baker, while another is sent home. The show first aired across the pond in 2010, and has since found a foothold in the US thanks to Netflix.

Unlike the often anxiety-inducing American cooking shows, TGBBS takes a more relaxed approach. That’s not to say that there isn’t high drama. Have you ever tried to make an intricate trifle — complete with jelly, fruit, sponge cake, custard and cream — in the image of the Union Jack in under three hours? I’ve seen the bakers on this show attempt it, and it certainly kept me on the edge of my seat.

But unlike its American brethren, TGBBS never feels like life or death. On more than one occasion, a contestant has said something along the lines of, “Oh well, it’s just biscuits.”

Still, the shear craft and thought going into each biscuit — to make sure it has a good snap, and that the cardamom and orange flavors balance perfectly — makes me want to curl up on the couch with my laptop and some tea, ready to watch another hour of British goodness. – LK

Like it or not, we Americans don’t have a lot of history — better to say, perhaps, that our history has occurred in a too-small space of time.

Seriously, people queue up to show the stuff of their attics and garages to the amiable experts of Antiques Roadshow: UK and end up revealing ridiculously valuable and significant items. I’ve seen episodes in which granny’s water pitcher dated to the 1600s. Her spice cupboard? From the Tudor Period; that is, the 1500s. I’ve even seen episodes in which rando Brits have trundled up stuff going back to the Roman occupation.

We just don’t have that here. In large part because “we” — our near precedents, at least — consciously destroyed all vestiges of the cultures hitherto existing so completely that they’re now sold in reservation gas stations as “authentic Indian arrowheads,” and such like.

The historical (and historic) terror of what transpired between Euro-invaders and Indigenous peoples in the Americas is, despite our wishes to the contrary, not far gone. Which is maybe why watching snaggle-toothed, baggy-dressed Britshers disgorge the treasures of their sitting rooms for review by a small army of material culture nerds is so soothing.

But, let’s be honest. The British wrote the book on brutal subjugation of Others: Scots, Irish, Indians, Africans, Maori and Otherwise — including, for about 270 years, the Indigenous North American peoples.

Yet, when I watch old broke-mouth dames from Taunton put their ratty dolls under the adjudicating eye of a bow-tied swot-boffin only to hear the latter rule that, “I’d say this would fetch about £1,200,” I thrill.

Truth is, large amounts of what passes under those expert eyes is plunder from places from Japan and China to Indian to Afghanistan to Africa (Zulus FTW). But it’s all so friendly and picturesque; and no one would ever sell a thing, of course.

I suppose what makes this post-imperial garage sale so calming — to the point that my kids hear the French horn intro on the TV and run downstairs to watch with me, as I give commentary on each item — is that the UK is simultaneously grosser and greater than we, their American cousins. – ZH