How Facebook and other social media help and hinder law enforcement, emergency management and people’s lives

Violence erupted July 2 at City Beach. Angry words escalated to physical blows. A baseball bat allegedly crashed down on an unnamed juvenile female victim. After a week of investigation by Sandpoint Police, officers on July 9 arrested 18-year-old Caitlyn Haskins in connection with the beating. 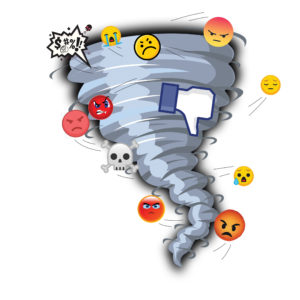 In the days surrounding the arrest, a different kind of aggression unfolded on Sandpoint Local Forum, one of the most popular social media gathering places for discussion of regional issues.

Commentary on the alleged beating became so vitriolic that moderators were forced to close all posts on the topic. One forum moderator, former Ponderay City Councilman Rick Larkin, worried that Haskins’ chance of receiving a fair trial in local courts would be compromised if the posting continued unchecked.

“I’m all for free speech — it’s a wonderful thing — but the right to a fair trial is also a right,” Larkin said.

In some ways, the explosion of social media in the last decade has been a boon for law enforcement and prosecutors. It allows agencies to communicate more easily and efficiently with the public. It opens a window into public opinion. It often provides evidence in individual cases, providing a snapshot of where people were and what they were doing at a given time and place. In a surprising number of cases around the country, it can button up investigations with pictures, video or even self-incriminating statements.

But with every light comes a shadow; and, in the case of social media, the misinformation it can propagate has an acidic effect on the orderly functioning of local government.

It’s not a frivolous concern. Sandpoint Local Forum boasts 6,939 members — an impressive number for a town estimated by the U.S. Census Bureau last year to have 8,703 residents. Subjects in the heavily trafficked Facebook group range from the cute and inconsequential — funny photos of pets, for instance — to heated, borderline abusive conversations on politics and local issues. Around elections or other occasions, when political and cultural differences are most sensitive, moderation requires a firmer hand than usual.

What reportedly happened at City Beach, however, was a league apart. The viciousness of the alleged crime, the involvement of teenagers, the allegations of bullying and targeted harassment, and the extent of the injuries — court documents indicate the victim required facial reconstruction surgery for a fractured eye socket — fanned the flames of public outrage.

“Several of us moderators had been watching [posts about the attack] really close,” Larkin said. “We banned some people because they were actually making threats. We try to keep within the Facebook rules, because if we don’t, Facebook will shut us down.”

Bonner County Prosecutor Louis Marshall has seen this sort of thing before in his criminal justice career. There’s just something about social media that begets poor impulse control, he said.

“There are many days I get forwarded a screenshot from social media, and I will immediately start shaking me head in disbelief,” he said. “I know there are so many great aspects of it, but I wish people would think a little more before hitting the button to submit — myself included.”

It’s a frustrating reality for Marshall, particularly because local officials often cannot comment on or correct false information related to cases that are being processed.

“Much of the information on social media is simply not true,” he said. “It really is just a bunch of nonsense sometimes, and yet people believe what they read and then spread it further. We can’t respond to rumors on social media, but I will admit, sometimes it is tempting.”

The spread of bad information is frequently furthered by well-intentioned people who simply don’t have all the facts. Other times, it comes from a more insidious place, Marshall said.

“Sometimes I feel it is purposeful disinformation,” he said. “It certainly hurts the notion of innocent until proven guilty, a bedrock principle in our criminal justice system. It also invades the lives of victims, most of whom don’t wish to have their lives on full display, especially in the middle of the worst thing that has ever happened to them.”

There’s simply no best practice yet identified to correct that problem. In some extraordinary cases, the justice system has taken a hand. In 2018, a jury found Erin Croghan, of Ohio, guilty of inciting a panic through Facebook posts. She was sentenced to 30 days of house arrest and three days in jail for multiple posts suggesting that a local student had been caught with a pellet gun. Prosecutors said she continued to make the posts despite knowing they weren’t true.

While the case earned prosecutors a courtroom win, others questioned the precedent it could set. Jacob Sullum, a nationally syndicated columnist and senior editor at Reason magazine, noted that if the courts are going to jail everyone who spreads misinformation on Facebook, the country is going to need a lot more holding cells.

“This precedent might make people think twice before passing along unsubstantiated rumors, but it also could deter people from questioning the government’s position on any number of issues where the facts are unclear,” he wrote. “Could strongly worded Facebook posts about a controversial police shooting be construed as ‘inducing panic’ by convincing young black men that cops pose a deadly danger to them? What about tweets alleging that the government’s preparations for an impending natural disaster are woefully inadequate?”

Pursuing legal action against a person for Facebook posts is an extreme step by any measure, and one that local prosecutors have never considered. But in the case of the alleged City Beach beating, Larkin worried about potential consequences of unchecked outrage — particularly when people began issuing threats.

“That’s what really started to bother me,” he said. “This was becoming a mob mentality.”

The potential impact of the social media hive mind goes beyond local controversies and threatening speech — the spread of irresponsible statements online may also put lives in danger, especially in instances of natural disasters or other large-scale emergencies. A 2018 study by the U.S. Department of Homeland Security examined three incidents — the South Napa earthquake in the San Francisco Bay Area in 2014, a 2016 Louisiana flood and the 2017 Oroville dam evacuation — in which social media misinformation hampered management efforts in times of crisis.

During the 2016 Louisiana floods, for instance, government and Red Cross workers found the public inundated by misinformation about policies, services and the emergency itself.

“Multiple motives lead people to post false information on social media: some posters seek a particular result, such as closing schools for the day; some desire to get attention with a dramatic post; some are pushing a money-making scam or political agenda; and some innocently repeat bad or outdated information,” the study authors wrote.

Local crises are just as vulnerable to social media misinformation. In 2015, wildfires threatened homes in the greater Sandpoint area. According to Bonner County Emergency Management Director Bob Howard, ensuring accurate information made its way to the public in that instance represented perhaps the most challenging moment of his career.

“It takes a lot of staffing time to make sure the social media messaging we put out is correct information, and we work hard to correct any misinformation,” he said.

It was no small order for an emergency that required evacuations in threatened communities. With homeowners’ properties in danger, anxiety and fear accelerated the spread of misinformation, Howard said.

Ironically, social media proved the best antidote to the problem it helped create. By collaborating with state and federal agencies for accurate, up-to-date information, Howard said he and his team used Facebook to answer questions, issue instructions and correct falsehoods.

“Social media is one of the best ways to get that information out to the community,” he added.

The challenge lies in striking a balance: the tendency for social media to bring out people’s worst impulses versus the tools it gives communities and officials to communicate quickly.

Marshall said the public bears some responsibility to exercise restraint and know when to put down the smartphone. Sandpoint resident Bret Johnson, an English teacher at Lake Pend Oreille Alternative High School, is doing just that. Shaken by the vitriol that unfolded in the alleged City Beach beating case, he wrote the Sandpoint Reader in a letter to the editor that he’s had enough.

“We can marvel at the spectacle,” he wrote, “each of us offering our two cents, criticizing dissenting opinions, basking in the schadenfreude, self-immolating in the white-hot blaze of a screen. I, for one, am taking a much needed break. Facebook, I bid you adieu.”