Of all the early-2000s country music hits, nothing serves as a better soundtrack to summer days on Lake Pend Oreille than Craig Morgan’s “Redneck Yacht Club.”

The upbeat track paints a picture of boats “strung together like a floating trailer park,” partying all summer long. It’s a common scene along the lake’s various shorelines, and puts words to the unique joys of living simply on the water with friends. 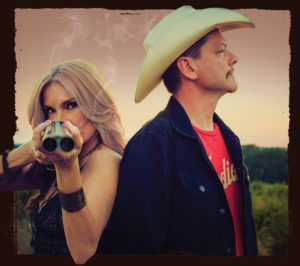 Thom Shepherd co-wrote the song, which appeared on Morgan’s 2005 release “My Kind of Livin’.” Shepherd said that, at the time, country radio was leaning toward a “slicker” sound. No one was finding success with anything as “redneck-y” as “Redneck Yacht Club.”

“We wrote it anyway. I figured, ‘Let’s just write it for our friends down at the boat dock,’” he said, “but then country [radio] caught up with it.”

An era of fun-loving, hick-heavy country music then dawned, paving the way for artists like Blake Shelton and Florida Georgia Line to parlay the redneck stereotype into greenbacks — a trend that has held strong for more than a decade.

Shepherd and his wife, Coley McCabe, have both worked in the songwriting industry and now spend the bulk of their time creating music and playing gigs together as “Thom and Coley.” Shepherd said they’ve been on the road in a motorhome nonstop for three years now, inspiring the title track from their new album, “Shotgun.”

“There’s a line that says, ‘when you’re tired I’ll grab the wheel,’” he said. “It’s true. It feels like we’re always driving.”

Thom and Coley will play the Panida Friday, July 19, with friend and Texas trop-rocker Kelly McGuire. Trop-rock, or tropical rock, is a genre combining the classic sounds of country and rock guitar with steel drums and other instruments reminiscent of beach music — think Jimmy Buffet and Kenny Chesney.

Thom and Coley cast their genre net far and wide, Shepherd said, and working with trop-rock fits right alongside their old-time country and traditional rock influences.

Above all, though, Thom and Coley are storytellers. It all comes together to create intimate shows — something Shephard said he and McCabe strive for every time they play.

“When people come to see us, it’s like they’re in our living room,” he said. “We want you to feel like you got to know us in the two hours you spent with us.”