The brightest Sandpoint company you may have never heard of

Sequoya Cross may just own—quite literally—the hottest company in North Idaho, but a lot of people still have no idea

“I’ll wear a shirt that says ‘Backwoods Solar, Sandpoint, Idaho’ and people will say ‘Where’s that? I didn’t know we had a solar company here in town,” said Cross.

Backwoods Solar was started in Sandpoint—or rather, waaaay up Rapid Lightning Road—in 1978 by Steve and Elizabeth Willey. The couple were en route to British Columbia, got “stuck” in Sandpoint and decided it was as good a place as any to live, so they began building their home.

“They started having neighbors drop by and ask why they didn’t run a generator,” said Cross. “So Steve and Elizabeth started helping them out with their own solar systems, and it just grew from there.” 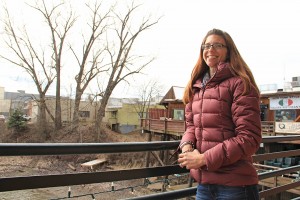 Aptly named, Backwoods Solar began as a home-based business that provided complete solar systems, wind or micro-hydro to people interested in living off-grid. Now, almost 40 years later, Backwoods Solar still maintains their home base on Rapid Lightning Road, but also has offices in Ashland, Ore.; Eureka, Calif.; and Meadow Creek, B.C. To date, they have sold anywhere from 30,000 to 40,000 systems across the world and designed twice that many. They currently employ 12 people, eight of which are based here in Bonner County.

“The majority of our employees live off-grid,” she said, “So they know what it’s all about.”

Cross now owns Backwoods Solar with business partner David Katz. She runs the company primarily out of her Eureka, Calif. office, though she travels back and forth from Sandpoint regularly.

Solar power has become more accessible in recent years, according to Cross, mainly due to customers understanding the industry better, but mostly because the costs have become less expensive.

Innovations to battery technology and solar panels have helped to reduce the costs, but Cross said the public perception is still out there that solar power is expensive.

“When I started 10 years ago, solar panels were going for about $4 a watt,” said Cross. “Now it’s around $1 per watt. That’s quite a difference.”

When they have a new customer, Backwoods handles everything except the installation.

“We’ll sit with our customers and custom design each system to meet their needs,” said Cross. “A lot of companies sell kits, but it varies depending on the environment. We’ll recommend all the equipment people will need, any people can call us anytime to ask what’s next.”

This free troubleshooting service is what sets Backwoods apart from their competitors, and it truly emphasizes the “mom and pop” nature of the business.

“These systems last for over 25 years,” said Cross, “And they’ll get free troubleshooting the whole time.”

Proponents often cite the environmental reasons for switching to solar, but according to Cross, that’s actually only a small portion of why people make the switch.

“The sun is a universal resource,” she said. “Wind is variable. The same goes for hydroelectric. You’d need a stream that flows year round past your house, which if you have one it really is the best resource as it generates 24/7. With solar, everyone has the sun.”

It’s a common misconception that you need to live in a predominantly sunny place to utilize solar power.

“Even on a cloudy day, the sunshine comes through,” said Cross. “The off-grid systems are built to accommodate three days without sun, so you can live through the days without sun. And, of course, we always recommend that people have backup generators when living off-grid. For gridded systems you are designing for an annual reduction on your electric bill, using averages.”

While most of Cross’ customers are interested in off-grid systems, there is a grid-tie system that is a hybrid for those with grid access and back up power from batteries. Most grid-tie systems don’t require batteries at all. Anytime the sun is shining, the meter runs backwards.

On top of the environmental benefits, there are also lots of tax incentives that make solar power more enticing to business and residential customers.

“When you buy a solar system, you can reduce your income tax liability by 30 percent of the cost of the system,” said Cross. Also, each state has further incentives. For a complete state-by-state listing of tax incentives, visit dsireusa.org. Idaho is currently featuring 59 programs that offer tax breaks to proponents of solar energy.

Cross believes the general public is becoming more aware of the need to rely on clean, sustainable energy. The biggest demand actually comes from third world countries, who have little access to power grids. Currently, Backwoods Solar is involved with many projects in Africa, Central America and South America.

But the intrigue of solar energy is that it is universal.

“We just won an international award in Great Britain for powering 220 remote villages in Africa so they could vote for the first time,” said Cross. “We have a very wide customer base. It’s not just those seeking green electricity. We have people doing tiny homes, we have preppers, sustainable living people. We get everyone from the very conservative to the very liberal and all points between.”

To learn more about Backwoods Solar, visit their website at www.backwoodssolar.com or give them a shout at 208-263-4290.