Every year, the Sandpoint City Council goes through a similar routine. 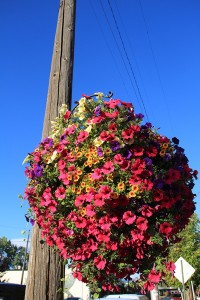 A flower basket provided by the BID hanging on the corner of Second Ave. and Cedar St. Photo by Ben Olson.

Deep into the process of preparing the city’s finances for the next year, members must approve the operational budget for the Sandpoint Business Improvement District. But unlike most of the budgeting season, with all its dizzying numbers and spreadsheets, the BID budget usually attracts some public attention. This year’s discussion at last week’s council meeting was no exception.

With its proposed $123,000 2016-17 budget under the microscope, BID advocates highlighted the organization’s achievements, while critics questioned the return they were getting on their investment.

At the meeting, Anita Aurit, owner of office space and co-working business The Office Sandpoint, said that between her type of business and her location on Fifth Avenue, she received minimal value compared to the businesses of the downtown core.

“I’m extremely frustrated because I have tried to make it work,” she told council members.

The BID, funded through a fee paid by downtown businesses between Superior and Larch streets and First and Sixth avenues, has long been controversial. Approved by a vote in 2000, downtown business owners have since divided in opinion over whether they’re getting their money’s worth.

“The main purpose of a BID is to benefit businesses and the community alike, by offering beautification and vibrancy to a designated area,” Sandpoint BID manager Kim Queen said.

To that end, the local BID runs several events and services. Perhaps the most visible program under its purview are currently the flower baskets hanging throughout the city. According to Queen, by working with local growers this year, they were able to reduce the program’s cost and increase the number of flowers distributed.

The flower baskets are one aspect of the BID’s beautification program, which also includes holiday lights and decoration as well as general maintenance and upkeep within the district. Seasonal outreach efforts are often paired with special events, like the Christmas tree lighting ceremony after Thanksgiving. The Winter Carnival is another popular event organized by the BID, drawing people downtown for a series of performances and attractions.

“Winter Carnival has … become an important event for the district, held during the dreaded winter/spring ‘shoulder season,’” Queen said.

Other services of the BID include marketing and advocacy efforts for members in good standing. For example, the BID website, www.downtownsandpoint.com, maintains a directory of district businesses. Whenever considering a project or outreach effort, Queen said the central question is whether or not it will help improve district vitality and prosperity.

Like many publicly funded organizations, however, the Sandpoint BID faces scrutiny by its members, some of whom resent being lumped into a program they didn’t vote for back in 2000. Prior to 2013, opponents leveled their complaints against the BID’s previous management organization, the Downtown Sandpoint Business Association.

In 2013, city and business officials decided to change up the DSBA’s structure. The organization was folded into the Greater Sandpoint Chamber of Commerce as a separate entity with a unique governing structure. Under the resulting system, the BID operates within the chamber building, eliminating the cost of a separate office and supplies. A team of local business leaders from a variety of backgrounds—restaurants, education, real estate, professional/banking/law, health care, retail, arts/entertainment, lodging and more—serve as overseers of the organization while advocating for their individual fields.

“These reps give valuable feedback on what is most pressing in their individual sectors (as it relates to the BID), and offer their insight and guidance in the BID’s decision-making process,” said Queen.

Even after restructuring, however, the BID still drew heat from some members for its funding mechanism. The BID fee is determined primarily through the business’ square footage footprint irrespective of location. At last week’s council meeting, Queen said businesses on Fifth Avenue, for instance, got short shrift due to the lack of infrastructure for Christmas lights or other beautification measures.

For Mayor Shelby Rognstad, the central difficulty is communicating the BID’s value to everyone paying into it. That’s especially true since its operational costs in the budget passed last week sit at 56 percent, which could increase to 70 percent if the BID doesn’t receive a $25,000 Sandpoint Urban Renewal Agency grant.

When questioned by Mayor Shelby Rognstad at the council meeting, Aurit said she would become a BID supporter and volunteer under a more equitable payment rate. However, changing the BID is no easy task. According to Sandpoint City Attorney Scot Campbell, because the BID was created by the businesses in 2000, city officials can only vote to dissolve the ordinance creating it. He was not aware of a means for the city to change the funding mechanism or add a sunset clause.

Despite the critics, Queen said that compared to many business improvement districts, Sandpoint’s offers a lot for relatively little money. Moving forward, she hopes to find a middle ground with BID opponents.

“… My hope is that those business owners would reach out, to either their representative or directly to me, and see if we can get their questions answered and their concerns addressed,” Queen said.

BID in the community’s eyes

Taxes—can’t live with them, can’t live without them. And yet one tax, imposed by Sandpoint’s Business Improvement District upon local businesses, has business owners reflecting on whether the benefits mirror the dues they’ve paid. While some are sold on the BID’s benefits, others are not so sure.

“I think it is misunderstood because most people aren’t clear on what the BID provides,” said Nicole French, owner of the florist shop Petal Talk on Cedar Street.

French noted the flower baskets that dot downtown as the biggest part of the BID’s budget, which she said she believes make Sandpoint look “amazingly welcoming.” She also said that when retail shop owners want to host an event, they can use BID money to advertise.

“I think there is a lot of support in that aspect,” French said. “But the BID is hard because is represents so many different types of businesses, and I think that that’s the biggest challenge.”

She said that services, such as salons, lawyers and doctor’s offices have different needs and goals than retail businesses—making everyone hard to please. She also noted that there are disparities in the square footage system the BID dues are determined for each business.

“I guess if I changed anything, then I think it should be more a flat tax fee,” French said, noting that while a business down the street may be larger and therefore paying more than her, that may not mean they have more money.

Brooke Deccio, owner of Azalea Handpicked Style on First Avenue, said she attended the most recent City Council meeting, and the BID has been on her mind since.

“It’s tricky for me because I’m right in the middle of downtown, so I get all of the benefits,” Deccio admitted, noting the common benefits that she says everyone knows about—the flower baskets, the Christmas lights and occasional live music. Still, she said she can see where some of the other businesses are coming from—especially the businesses that aren’t right on First Avenue.

“I feel comfortable with what I’m being charged for the benefits that I’m receiving, but I can completely understand where [other] businesses are coming from,” Deccio said. She noted the businesses on Fifth Avenue, where there is no street electricity, don’t benefit from the Christmas lights, and yet are still paying for them in their dues.

“Maybe it’s time for [the dues] to be reassessed,” she said, adding that anyone concerned about BID’s dues should attempt to contact manager Kim Queen, who she has found is easy to communicate with, or attend the quarterly BID meetings.

Calvin Ogle, owner of Sweet Magnolia Bed and Breakfast on Fourth Avenue, voiced concerns over the use of his BID tax money. Ogle has brought these concerns before city administrators in the past, and while he said he was assured there would be a change in how BID funds were funneled, he said he has seen no such change and has had rude encounters with BID officials.

“Something weird is going on,” Ogle said. “[The BID] doesn’t understand how hard we work for our money, and that’s why I get emotional talking about it.”

Ogle also noted that local businesses are “scared to death” thanks to “gossip campaigns” that the BID facilitate, and that the political climate of the BID’s dealings reflects their lack of genuine interest in the success of all small businesses.

“It’s not up to them to choose winners and losers,” he said. “They should be helping everyone who pays the tax.”

Ogle feels strongly that there should be further investigation into BID tax funds. He also noted that the square-footage-based taxation system needs re-evaluation, suggesting a tax based on revenue, or even a flat tax that each business within the district would pay.

“To imply that you got it correct the first time is absurd,” Ogle. “Sometimes you need to tweak things.”