Fashion is inherently a weird human construct. What you are wearing right now may be the hot new item, but I guarantee you will look back at photos of yourself in 20 years and laugh. Fashion speaks volumes about our culture and our obsession with establishing ourselves within predefined classes and tribes — all while ironically pushing individualism by conforming to the norms of the group.

Some fashion choices throughout history were especially cringe-worthy, and I’m not talking about the leg warmers of the 1980s or Lady Gaga’s meat dress. 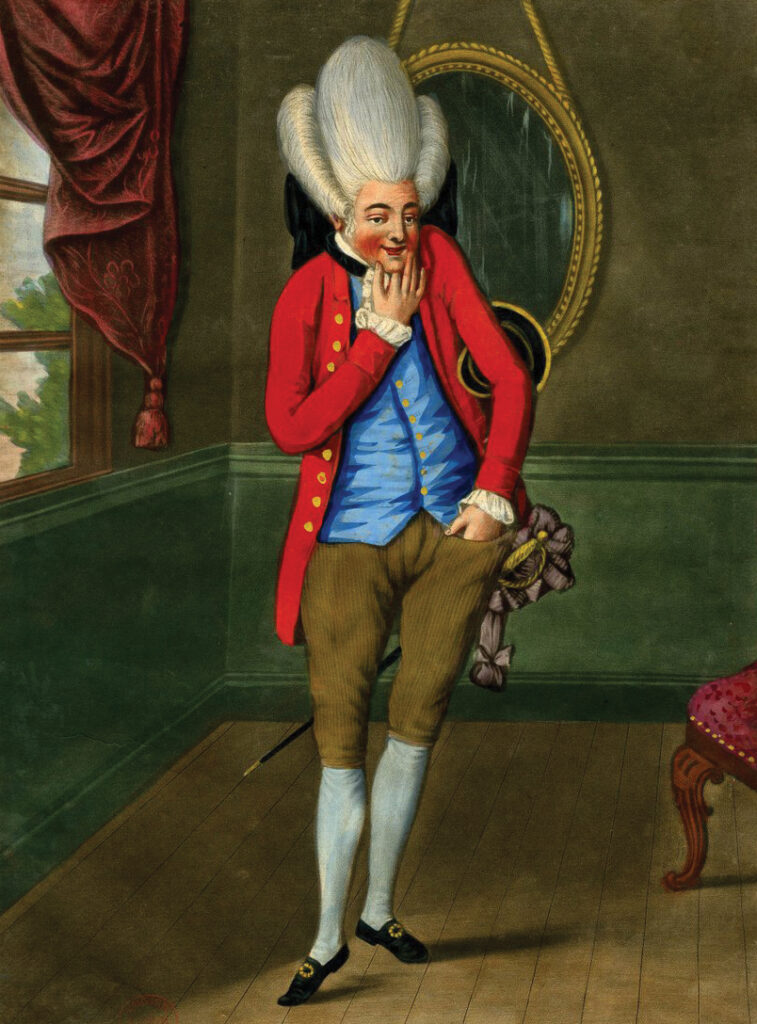 An example of a macaroni wig. Courtesy photo.

Throughout history, the political and financial elite have always looked for elaborate and extravagant ways to set themselves apart from their perceived lessers. The popularity of the clothing and accessories the upper class adorned themselves with would grow as the middle class attempted to emulate their looks in an attempt to better their own social station, which would trigger the upper class to outdo their own absurdity and create even more wild and outlandish outfits. This was especially true near the onset of the Industrial Revolution, when it became easier than ever for the middle and lower classes to procure mass-produced goods.

For example, consider the crinolines of the Victorian era, which took place in the mid-1800s in England and her colonies. Crinolines were the support structures that held up the giant and extravagant hoop skirts of the time, and were made from wooden frames supported by steel or whale bones. When paired with tight-fitting corsets, crinolines were designed to make fashionable women look thin, but with large and luxurious bell-shaped skirts that concealed their legs from view.

These structures were extremely dangerous, as it essentially trapped the wearer inside of a mobile cage draped in extremely flammable cloth. Fashionable women burning to death from skirt fires in Victorian England was such a common occurrence that public safety officials at the time recommended keeping fire retardant blankets nearby at all times — because that was apparently more sensible than taking off the six-foot-wide undercarriage in the name of fashion.

Curiously, crinolines did have some positive effects associated with them, though whether or not that outweighs the immense danger of burning to death or getting caught and dragged into exposed machinery on factory floors is up to debate.

For instance, crinolines offered women more personal space, especially from men that one would consider ungentlemanly. They were quite durable, and made it difficult for unsavory men to physically accost the women — especially when the women traveled in groups together.

Also, in case you are wondering, yes, crinolines made it very difficult for women of the era to get through doorways, and yes, it was very much a Winnie the Pooh situation, as steel frames have never been constructed with flexibility in mind.

Another form of outlandishly weird fashion brings some illumination to the famously confusing line from “Yankee Doodle.” You know the one I’m talking about: “stuck a feather in his cap and called it macaroni.”

Many of us growing up thought this was a nonsensical allusion to the pasta of the same name, but it was actually commentary on the ludicrous “macaroni fashion” of the 1700s European aristocracy. Powdered wigs were commonplace throughout much of the world at the time, as they allowed easier control of lice and other parasites, but the macaroni wigs were wildly over-the-top.

Macaroni wigs were huge — easily adding twice the surface area to the head of anyone who wore on — and its absurdity was matched by the garish and brightly colored clothing of the people wearing the wigs. The fabric and dye used to create these garments was extremely rare and expensive at the time, and only the ultra-wealthy were capable of affording it — a fact they loved to lord over those in the social classes beneath them.

This proved to be a fatal error in judgment on the aristocracy’s part, particularly in France. Akin to billionaires posting Instagram stories of themselves on superyachts in the middle of a global pandemic, the aristocracy in the 1700s was completely tone-deaf to the laments of the classes they sought so passionately to spite.

In the case of King Louis XVI and Marie Antoinette, they discovered firsthand that the fashionable flaunting of their wealth was no way to get a-head in life.

Another curious fashion practice of bygone eras was bombasting, in which people would stuff their sleeves to create a large, puffy effect. Men would frequently do this with the bellies of their doublets as well, to create the appearance of a legendary dad-bod. At the time, excess weight was viewed as a sign of prosperity — anyone who could afford enough food to be fat was a person of great wealth, as most people couldn’t afford enough food or free time to put on the pounds.

It is curious to see how the opposite is true now, and speaks volumes about how we’ve changed as a society — not just in fashion, but in the availability of high-calorie food for the lower and middle classes. It’s actually more expensive to lose weight and remain healthy than it is to plow through some high-calorie junk food, and now that is reflected in our standards of fashion and beauty.

What rare items will be in fashion in 10 years? I couldn’t tell you, but once you see models hitting the catwalk wearing dresses filled with water, you know we’re in serious trouble.