The road to the governor’s office:

While the nation’s attention is fixed on the 2016 presidential election, Russ Fulcher’s eyes are on Boise.

The former Meridian state senator took many lessons to heart from his failed 2014 campaign for the governor’s office, the most pressing being the invaluable resource of time. That’s why, a year and change before the 2018 election heats up, he’s canvassing the state from Sandpoint to Boise, meeting with voters and hearing their concerns. 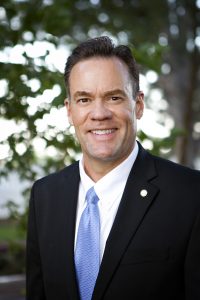 If time is one element to success, a changing political climate within Idaho is another. And Fulcher believes he can offer voters dissatisfied with the status quo a compelling alternative when he challenges Lt. Gov. Brad Little in the Republican primary election for the gubernatorial nomination.

“Ironically, it may be to my advantage right now that I am not an incumbent,” he said in a September interview.

By most accounts,  Gov. C.L. “Butch” Otter was feeling the heat in the lead-up to the 2014 primary election. According to a 2013 Idaho Statesman blog post by Dan Popkey, Otter told the audience at a Associated General Contractors winter meeting that his reelection was “Idaho’s greatest challenge for 2014.”

The gubernatorial incumbent was dragging his share of political dead weight. A controversy over the possibly illegal award of a contract for the Idaho Education Network—a broadband networking system for Idaho schools—culminated in a court ruling against the state in October. Along with it came accusations of cronyism from opponents of the Otter administration.

Otter was also dogged by a scandal surrounding Corrective Corp of America. The out-of-state private prison corporation fell under FBI investigation for managing an Boise prison so violent it earned the nickname “gladiator school.” What’s more, CCA benefited from a $26 million-a-year contract with Idaho, yet a forensic audit by the Idaho Department of Correction showed the corporation understaffed the prison by 26,000 man hours in 2012 alone. It didn’t help when media sources revealed the more than $20,000 in donations by CCA to Otter election campaigns.

Another open question was how to handle Medicaid expansion in the wake of the Affordable Care Act. Hard-line conservatives and grassroots Tea Party groups chided the GOP establishment for failing to assert Idaho authority in the face of perceived federal overreach. More liberal Idahoans blasted the Otter administration for stalling the Medicaid expansion, leaving thousands of working poor Idahoans in the so-called health care gap.

Fulcher, meanwhile, was buoyed by an endorsement from Idaho Congressman and conservative favorite Raul Labrador, who criticized Otter’s failure to lead and lauded Fulcher’s “political courage and fresh ideas.”

Fulcher also pursued voters dissatisfied with the Idaho GOP establishment. In an email prior to the election, he reminded Democratic, Libertarian and Constitutional party voters they would not be able to vote in the Republican primary unless they changed their affiliation.

“I truly believe under our current leadership that a lot of people have been driven away from our party,” he told the Idaho Statesman. “If I’m going to be successful I’ve got to be able to pull them in, or at least some of them, and unite that effort.”

Otter and Fulcher’s disagreements over the interplay between state and federal government, expressed through issues like health care, Common Core education standards and federal ownership of state lands, was a centerpiece of media election coverage. Idaho voters saw that dynamic in play during the televised May 14 gubernatorial debate. To the nation’s delight and Fulcher’s chagrin, it wasn’t the only thing they saw.

At Otter’s insistence, two perennial fringe candidates, Harley Brown and Walt Bayes, vied alongside the two Boise mainstays during the hour-long debate. The result: a contrast between two comic farces and two straight men that matched any Monty Python sketch for absurdity. While Otter and Fulcher battled it out over policy, Brown talked about being “as politically correct as a turd in a punch bowl” and Bayes bemoaned the lack of commercial access to potassium iodide for radiation treatment. Brown summed up the election memorably as a choice between “a cowboy, a curmudgeon, a biker or a normal guy,” Fulcher presumably being the normal guy.

The debate went viral, catching the eyes of the world as sideshow entertainment. The next day, Fulcher blasted Otter for what he saw as an intentional derailment of the conversation.

“… The ‘debate’ turned from a serious discussion regarding the position for Idaho’s chief executive, to a mockery of the Republican Party and of Idaho,” Fulcher said in a statement. “Clearly, the governor wanted to take time away from me and minimize exposure to his failed record as governor.”

Whether or not the debate had a deciding factor in the election outcome is unclear, but the numbers are not. Otter bested Fulcher for the Republican nomination in a 79,779- to 67,694- vote election.

Just like that 2014 gubernatorial debate, the 2016 presidential election has caught the world’s attention in all its reality TV luridness. And while Fulcher didn’t mention what he thinks of Donald Trump, he is watching the growing rift between establishment and anti-establishment interests.

“There is a kind of populist attitude bubbling up,” he said. “More often than not, I am seen as the good guy in this.”

If anti-establishment sentiments persist into the 2018 election, the thirst for change could work to Fulcher’s favor, as could the open seat vacated by the retiring Otter. Fulcher faces Little, long presumed to be Otter’s heir apparent, in the 2018 primary election, and he believes he is poised to be the candidate of change. According to him, Little is likely to share many of the positions he criticized in the Otter administration.

“In terms of policy, if we have [Brad Little], I would not expect a lot to change,” Fulcher said.

“Voters may end up saying [about me], ‘Here’s someone who is truly trying to offer a change—maybe we should give him a shot,’” Fulcher later added.

On his website, Fulcher maintains the policy positions that made him a conservative favorite in 2014. He opposes Medicaid expansion, preferring instead a private health insurance market that encourages industry competition. He opposes Common Core, saying that Idaho should control its school standards. And he resists federal management over 63 percent of Idaho lands.

As the state creeps toward 2018, Fulcher believes the appeal of his ideas will only broaden as Idahoans’ patience with the state economy withers. That includes its dependence on federal government, which returns $1.35 to Idaho for every dollar sent to Washington, D.C.

“The donor states are starting to lose their sense of humor in subsidizing the donee states,” Fulcher said.

He also aims to embrace residents wearied by the state’s over-dependence on service industry jobs. Fulcher hopes to reinvigorate Idaho’s manufacturing industry, and one of the ways to do that, he said, is enhance coordination between educators and employers.

Fulcher believes his life experiences have equipped him to serve all Idahoans. After his youth on an Idaho dairy farm, he earned bachelor’s and master’s degrees in business at Boise State University. The education led him to a 24-year career in the tech industry with Micron Technology. In 2004, he was elected to serve as a state senator.

A varied career path is one thing, but winning hearts and minds on the campaign trail are another. Perhaps the greatest lesson from the 2014 election is starting early and strong with that goal in mind. Next year, he and his volunteers aim to reengage the support base that made 2014 such a tightly contested election. Fulcher believes that voters are ready for a change; his job is convincing them he’s the man to bring it.

An earlier version of this story said Fulcher was still a state senator. In fact, he did not pursue reelection to his seat, launching instead his 2014 gubernatorial campaign. The story has since been corrected.