It won’t be long before visitors to Jeff Jones Town Square will be taking a step into the future.

The city of Sandpoint announced Friday that the Idaho Department of Commerce approved a $48,734 grant to set up a Solar Roadways demonstration project within city limits. The Gem State grant, which is set up by the state to promote economic development in rural communities, will fund the installation of Solar Roadways panels on the concrete area near the fountain. For Sandpoint city administrator Jennifer Stapleton, the project is an exciting opportunity to showcase a locally grown business that has attracted global attention through successful crowdfunding campaigns and viral videos. 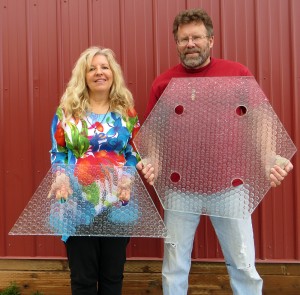 Scott and Julie Brusaw pose with a panel of glass. Courtesy of Solar Roadways.

“I think this is a project that really reflects the values of our community,” she said.

The Gem State grant requires a $10,000 match from the city, which council members have approved. The Sandpoint Urban Renewal Agency also kicked in $10,000 to develop and educational factor to the demonstration, as well as cover unforeseen expenses.

Solar Roadways is pitched as a possible replacement for concrete and asphalt walking and driving surfaces. The design uses durable, strong glass panels to provide traction, while an internal array of electronics and solar cells generates electricity and paints signs, messages or road lines through LEDs. A project in development for years, its international profile exploded in 2014 with the viral “Solar Freakin’ Roadways” video—to date viewed more than 21 million times—and a $2.2 million crowdfunding campaign on Indiegogo.

According to Stapleton, the company’s popularity resulted in offers left and right from cities or organizations hoping to secure the first public demonstration. It was the Brusaws’ commitment to Sandpoint and a fortunate confluence of events that secured Sandpoint’s place as the first Solar Roadways city.

“Everything just aligned with between this grant program [funding period], the development of the [Solar Roadways] product and our ability to put in this application,” said Stapleton.

City officials selected Jeff Jones Town Square as the prime location for a demonstration, a decision based on many factors. The development site needed to be someplace public with a high degree of sunlight exposure. It needed convenient electrical conduits and adequate parking. And it needed to be centered somewhere relatively close to the Solar Roadways headquarters while still encouraging visitors to explore downtown businesses.

The economic benefit of the demonstration was a major motivator in pursuing the grant, Stapleton said. Considering the popularity of Solar Roadways, she expects the the project to become a focal point for tourists. To maximize its benefit, Stapleton aims to include an educational and interactive component. For instance, kids might be able to change the configuration of the LED lighting into a hopscotch course or some other design, she said.

While the city expects an economic and public relations bump from the project, it will also serve as the first public demonstration for Solar Roadways technology. It will be a measurable test of the technology’s durability, cost effectiveness and durability. In addition, it will introduce the public to the latest panel design, now in its third prototype phase.

“Other than the hexagonal design, [the latest prototype] doesn’t look anything like the images [media outlets] have been running,” Stapleton said.

With grant funding secure, city officials can start piecing together project details. Stapleton is looking forward to working with the Brusaws, who she says have been instrumental in making Sandpoint the first Solar Roadways city.

“To Julie and Scott Brusaw’s credit, they’re really committed to this community and very proud of where they come from,” she said.