Old-time North Idahoans reminisce about the days when hippies and loggers joyously coexisted. Some argue they still do.

A similar symbiotic relationship will be on display at Chapman Springs Ranch in Clark Fork on Saturday, Jan. 29, when ski bums and cowboys will unite at the ranch’s first-ever skijoring competition, during which horseback riders will tow skiers over snowy terrain to break time records and, in some cases, catch big air.

Jenna Mickelson, manager at Chapman Springs and one of the organizers of the event, said she and the ranch owners were inspired when they attended a skijoring competition in Utah last year. 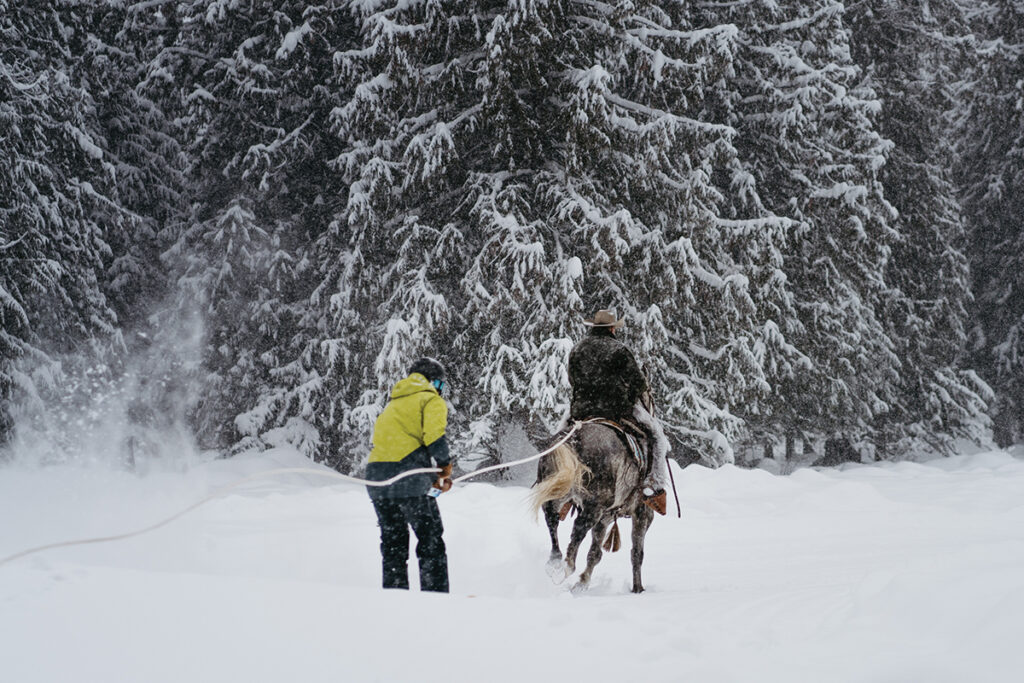 Skijoring in action at the Chapman Springs Ranch in Clark Fork. Photo by Anvil Film Co. and the Champman Springs Team.

“We kind of just fell in love. … We had never heard of skijoring in this area,” Mickelson said, noting that she did later learn of past skijoring events at the Bonner County Fairgrounds. Regardless, the Chapman Springs crew resolved to bring the sport back to North Idaho on a grand level.

That endeavor appears to be a resounding success, as tickets officially sold out Jan. 25. Mickelson said the limit was due to parking capacity at the ranch. She estimates that 700-800 people will be making the trek to Chapman Springs this weekend, including the 100 teams of riders and skiers registered to participate. Some are coming from as far away as Colorado and Alberta, Canada.

Traveling from just across the border in Montana is participant Bradley Fitchett, whose company, Elk Creek Contracting, is responsible for building the skijoring courses.

“Skijoring has been a fun winter activity the last few years,” Fitchett said. “It’s hard to do much with your horses with the winters we get around here, so we have ‘skijored’ for fun in the fields for something to do with the horses.”

This will be Fitchett’s first-ever “real” competition, he said.

“I’m really looking forward to watching all the other competitors who are coming from all over the country, and even Canada, to try their hand at winning this event,” Fitchett said. “The ‘big air’ event is also very exciting. Watching a full-speed horse let an experienced skier or snowboarder loose onto a giant ramp to see how high and what tricks they can do will be pretty awesome, to say the least.”

While Friday, Jan. 28 is reserved for participants to get registered and settled in at the ranch, the action officially kicks off at 8 a.m. on Saturday, Jan. 29, as the gates open to ticketed guests.

While this year’s event is sold out, those interested in future skijoring events are encouraged to follow the ranch on social media, as this is likely to be the first of many at Chapman Springs.

“I think it brings a great group of people together,” Mickelson said. “The horse community, or the Western community, and the ski community are so different. That was one thing that we loved when we went to our first skijoring event — just the different people that we got to meet and talk to from all over the United States and all different backgrounds.

“It was just fun to bring such a diverse group of people together to have a good family time,” she added. “The adrenaline rush is like no other, it’s crazy — even just watching it.”

Follow Chapman Springs Ranch on social media, including Instagram (@chapmansprings) for updates on future events at the ranch.