In search of anurans

Near the muddy fringe of a mountain lake, a Columbia spotted frog glides silently from its invisible hiding place on the bottom. It floats half-submerged, its long legs trailing behind. I stand motionless in the shallow water, watching it closely. 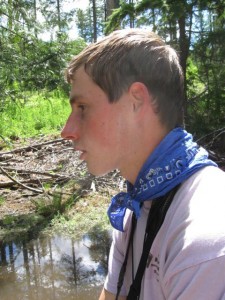 I’m a student field naturalist in my second year of independent study, learning about ecology and all the life around me. I’ve seen frogs and toads before, but I’ve never paid them much attention. My studies have broadened my awareness, and learning how to identify amphibians has spurred my curiosity. And so, I am stalking frogs, hoping to learn more.

There’s excitement and mystery for me in the search, not knowing what I will find. One native species, the northern leopard frog, has inexplicably disappeared. It’s unlikely that any still survive here, but I’m keeping my eyes open.

At the mountain lake, I find several Columbia spotted frogs and over 20 yearling western toads. This beginning inspires me, and I’m eager to continue searching.

Now, a week later, I’m wading barefoot up a lowland stream, following its meanders. The sun is hot, but a strong gust of wind pushes against the alders and they rustle loudly, leaves flashing reflected sunlight. As I wade slowly through the cold, knee-deep water, three small brook trout swim rapidly upstream, then turn and dart by me. A small orange butterfly lands on the forget-me-not along the bank. I edge closer, raise my binoculars, and see bright orange wings, patterned sharply with black.

As I move on, the bank becomes a gentle, muddy slope, speckled with deer tracks and bordered by blooming forget-me-not and buttercup. The sun-bathed mud is warm to my toes as I stoop, looking for fainter tracks. Suddenly, there’s a brownish blur as a small frog leaps into the water an arm’s length away, swims in a rapid zigzag along the bottom, and disappears. I wade quietly to where I think it’s hiding, watching intently.  Something moves in the shadow of a half-buried branch—an inch-long caddisfly larva, waving black appendages from its pebble case. The frog has eluded me, but now I’m on the lookout.

A few yards upstream, I step carefully over a fallen alder. As I straddle it, another frog leaps into the water from the sunny bank ahead and vanishes in the ripples. I judge that one impossible to find, and sit down in the shade. Ahead, the water talks constantly in a riffle, its voice blending with that of the wind. A male yellow-rumped warbler, in his bright breeding plumage of black, white, and yellow, lands near me on the alder. He flits from perch to perch, and I wonder if he’ll drink from the stream. Instead he flies on, low over the dense grasses bordering the creek. 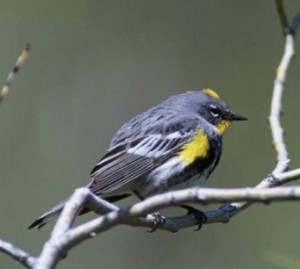 I continue upstream, carefully feeling the slippery cobbles of the riffle, almost invisible under the whitish froth of sun-painted wavelets. Red-osier dogwood hangs low over the stream here in dappled shade, its green fruits swelling where a month ago white flower clusters were. Ducking under a large spiderweb, I see a solid mass ahead, spanning the narrow stream—a beaver dam!  When I was last here, two years ago, the dam was not.

Eager to explore the changes, I climb up on the dam, which is over four feet high and 25 feet long. Pollen is floating in the water behind it, forming parallel ridges like strata of rocks. A pale yellow butterfly appears and lands on a grass stem. Three cedar waxwings fly rapidly past, flashing yellow tailtips. Looking in the direction they went, I see a channel leading off through the deep silt of the pond. The slow water should make it easy to follow frogs, right? Just as I step across a beaver-dropped alder, a frog leaps from the muddy bank and swims upstream into a tangle of grasses along the shore, leaving nothing but a cloud of suspended murk behind it. I sit on the alder, hoping it will re-emerge.

By the time I glimpse a dragonfly patrolling low over the mudflat ahead of me, I’m getting impatient. I decide to wait a bit longer, and contemplate the fallen but living tree I’m perched on. Its upper branches, resting on a muddy hummock, are sprouting new growth. Unexpectedly, I detect the shape of a frog, sitting patiently on the mud nearby. I’m barely far enough away to focus my binoculars on its mud-colored back, speckled with irregular black splotches. It’s a Columbia spotted frog, and I’m grateful to see it. It must be very aware of me, but it sits completely still. I contemplate trying to catch it for a closer look, but decide to leave it undisturbed.

I continue along the pond’s edge, skirting the deep midstream water. There’s no sign of a beaver lodge—are they denning in the bank? I respectfully pass a tangle of stinging nettle, mingled with the dense grasses. Beyond it is a vigorous patch of cow parsnip, its cauliflower-sized white flower umbels towering above huge, rhubarb-like leaves. So far, I’ve inadvertently startled two more frogs, which have disappeared with ease. Now I scare another, which swims into the shadow of an alder and floats there, well camouflaged among dead leaves held in an eddy. With binoculars, I confirm it’s another spotted frog.

I look around me for several minutes, enjoying the peacefulness of this place. When I glance back at the water’s edge, the frog has departed silently, slipping back into the vast, hidden world of the pond.

Dinner is calling. Following my tracks back downstream, I ponder the water’s murky blue-brown depths, wondering at all the life surrounding me. At times I feel intimidated by so much that is unknown. Mostly, though, I am awed and inspired by the beauty, complexity, and mystery of the natural world. The frogs, the waxwings, and the alders offer me infinite, endless teachings, if only I choose to slow down and listen.