The levy rate has fallen consistently since 2017, when it was $5.75 per $1,000 of assessed value — that’s because of significant increases in overall assessed property values in the city. That jump was especially considerable between 2020 and 2021, rising from about $1 billion to more than $1.13 billion. According to city budget writers, the 2021 preliminary tax rolls show a projected increase of more than $133.7 million (or 13.36%) in overall property tax value from December 2020.

Rising property tax values are part of the wider story of growth both in Sandpoint and Bonner County. 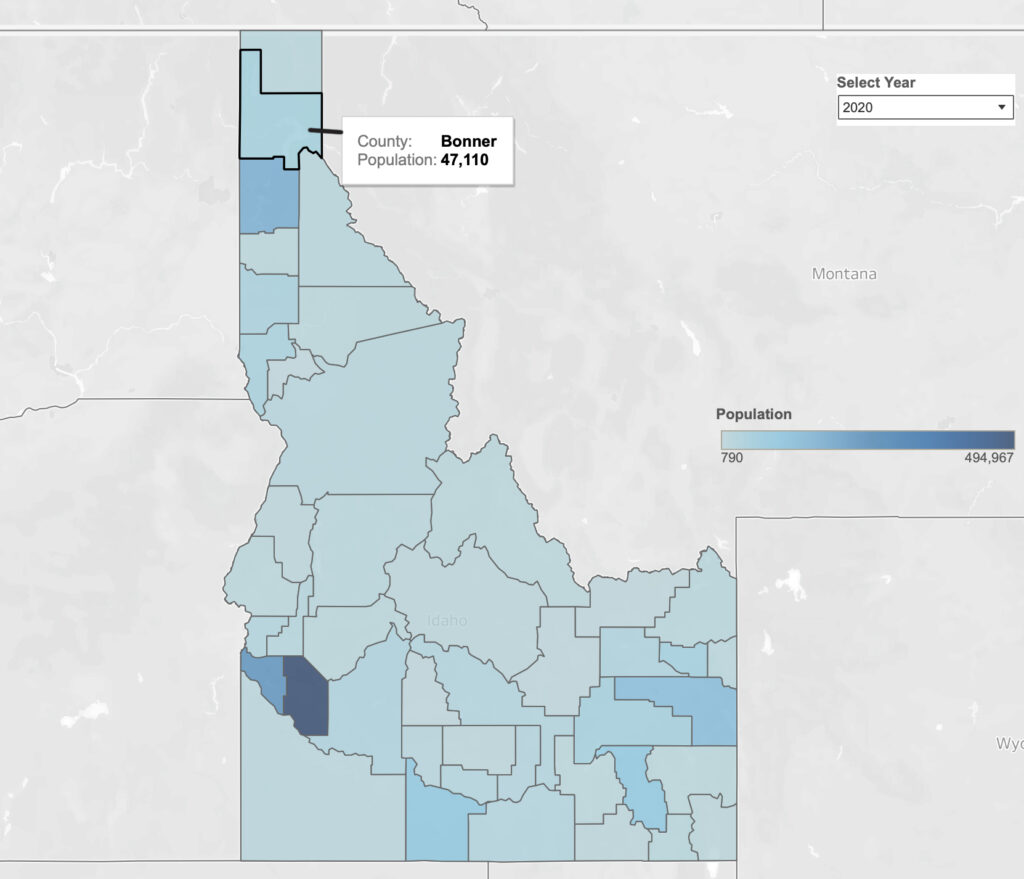 According to figures released Aug. 12 by the U.S. Census Bureau, the city of Sandpoint grew by a total of 1,274 residents during the past 10 years, representing an overall population increase of 17.3% to 8,639 individuals in 2020.

As Sandpoint City Administrator Jennifer Stapleton noted at the Aug. 18 council meeting, the city’s percentage growth tracks with the statewide average but exceeds that of Boise, which recorded 14.6% growth over the past 10 years. Meanwhile, Coeur d’Alene grew 23.8% and Post Falls increased by about 40%, Stapleton said.

“We are definitely seeing the growth,” she added, though noted that it is all but certain that recently released numbers are lower than reality — in part because they don’t capture the influx of newcomers experienced by the region as a whole during the COVID-19 pandemic, which began in spring 2020.

“We believe these [numbers] are lower than what we’re all experiencing, feeling and seeing,” Stapleton said. “We’re looking at data based on the surveys and door-to-door surveys that were completed well over a year ago at this point.

“What we’ve seen is that it feels like we’re at that 17.3% growth just from last year to this year.”

The picture was similar countywide, with relatively slow growth — even a population decline of 675 from 2010 to 2012 — during the first five years of the decade followed by robust and sustained growth from 2015 to 2020.

Over the 10-year period, the county grew by 15.2%, adding 6,233 residents for a total of 47,110. Overall, Bonner County ranked ninth statewide for percentage change in population over the 10-year census cycle.

While interesting in and of itself, the census count for Sandpoint could have had big consequences for the city’s ability to raise voter-approved tax revenue. Under Idaho law communities with 10,000 or more population cannot claim resort city status, which enables them to gather dollars from sources such as bed taxes and local option taxes.

Stapleton said that the city had been “anxiously awaiting” the census numbers, fearing that the average $500,000 per year gathered from the bed tax could go away. That money is typically used to pay for things like public safety in order to ensure that tourists pay for some of the demands on city services that they create, rather than all those costs being borne by property taxpayers.

“We’re all feeling the tourists and we’re seeing it in the data,” Stapleton said, noting with some relief that, “We believe that we are well over 10,000 at this point,” but that won’t be represented until the next census.

In addition to the budget, the City Council also unanimously approved a slate of fees, including a number of increases in excess of 5% as well as new fees.

Among the new fees are a $5.25 charge for dog tag replacements, $3,539.08 for tour boat moorage, and several for residential mechanical and HVAC permits.

As with the FY2022 budget, the effective date for fee increases is Oct. 1.

Meanwhile, the city postponed a meeting of the Planning and Zoning Commission that had been scheduled for Aug. 17.

The commission was set to hear amendments to Title IX of the zoning code, which city staff presented at its July 20 meeting. At that time, the proposed amendments would have redefined what kinds of structures could be built within 25 feet of the vegetative buffer from the high water mark of Sand Creek, enabling redevelopment projects between Bridge and Cedar Streets — including the Farmins Landing downtown waterfront project envisioned in the Parks, Recreation and Open Spaces Master Plan.

According to the city, the new hearing will take place Tuesday, Sept. 7 with a revised version of the amendments, “which limits the scope of the proposed changes based on public feedback received by city staff.”

The revised draft ordinance containing the amendments is due to be made available on the city’s website (sandpointidaho.gov) on Friday, Aug. 20.

“The purpose of the proposed ordinance remains the same: enabling the public improvements, including significantly enhanced stormwater treatment, as envisioned in the adopted Downtown Waterfront Concept included in the City’s Parks and Recreation Master Plan,” the city stated.

Written testimony of no more than two pages will be accepted until 5 p.m. on Friday, Sept. 3 and can be delivered by hand to City Hall (1123 Lake St.) or email to [email protected]

Seats currently held by City Council President Shannon Sherman and Council members Joel Aispuro and John Darling will be on the 2021 ballot, each for four-year terms ending in 2025.

More information and forms are available at sandpointidaho.gov under “Meetings” and at voteidaho.gov/city-resources.