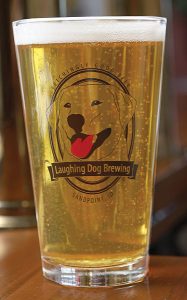 The awards competition is held in conjunction with the Mountain Brewers Beer Fest at Sandy Downs Race Track in Idaho Falls each year. Judges for NABA selected their medalists through blind tasting sessions to match beers to specific style guidelines.

MickDuff’s earned a gold medal for their Se Habla Cerveza in the Vienna Lager category while Laughing Dog earned a gold for their Imperial Pecan Porter, in the Specialty and Experimental Beers category.

The Se Habla Cerveza was MickDuff’s assistant brewer Mack Deibel’s creation, brewed with trial and error and a touch of adventure.

“I brewed a Vienna Lager a year ago and sent it to the NABA,” said Deibel. “I got some notes back, and it got bashed pretty good for being out of style. Too dark, too roasted, too everything.”

Deibel took these notes to heart and did another 20 hours of research on the German brewing philosophy, coming up with a new beer true to the original recipe, but cutting out the elements that were too much for the judges.

“I guess a blind squirrel finds a nut sometimes,” he said.

The Vienna Lager, said Deibel, is like a German Amber Lager: “It’s a little nutty, a little biscuit-y,” he said. “The most classic example is Negra Modelo from Mexico.”

“They were the guys who influenced beer culture in Mexico the most,” he said. 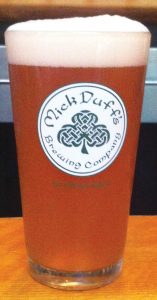 This year was the second year MickDuff’s was able to attend the NABA awards: “It’s a huge award competition in North America,” he said. “It was really great to be there with friends and attend the guild meeting while we were down there. It was also great that Fred [Colby] from Laughing Dog was recognized for his 10th year as a judge.”

For Colby, the owner of Laughing Dog Brewery in Ponderay, the NABA awards have been a yearly ritual for the past decade.

“We have been pouring there for 11 years, and I have been judging there for nine,” said Colby. “It’s a really fun competition, and it’s great that the guys from MickDuff’s went down and we got a chance to hang out.”

“There is no category for beer made with nuts,” said Colby. “We’ve actually made this beer as a one-off for a little over a year, known as the Anubis Imperial Coffee Porter. One of my brewers said it would be really good with pecan added to it.”

Colby said over 1,800 beers were entered into the competition this year, of which 132 won medals.

“Actually, Idaho breweries did fairly well this year,” he said. “A lot of first-timers won medals, too. Since I’m a judge there, too, I get to see the inner workings of it all.”

Over the years, MickDuff’s has taken home about a dozen medals, while Laughing Dog has an estimated 16 medals.

For those interested in trying the winning beer, Colby said it’s in the queue at the Laughing Dog Taproom to be poured: “As soon as we blow the keg of something else, we’ll get it going.”

Deibel also said his Vienna Lager will be available at both MickDuff’s Beer Hall and Brew Pub for another couple of months.