If these walls could talk, who knows what stories they would tell.

If you trace history back far enough, you might find that just about every historic building in Sandpoint started as a saloon, a gambling den, a brothel or all of the above. In this first installment of our Dark History series, we’ll highlight one notorious area of prostitution; 110 N. First Ave., the current location of Spud’s Grill and Starbucks.

As with all articles in this forthcoming series, assistance and research was provided by the Bonner County History Museum. These articles are meant to draw attention to their current “Dark Side of Sandpoint” that will run until April.

In this particular article, the majority of information came from the “Sandpoint Historic Red Light District” Project, with research by Dale Selle. The project was compiled in 2005 and contains great backstory for many of the historic buildings we still see in Sandpoint today.

An aerial view of Sandpoint, circa 1905. The cribs began popping up on the left, or west side of Sand Creek. Photo courtesy of Bonner County Historical Society.

As with most buildings in Sandpoint, 110 N. First Ave. (the current location of Starbucks) began as a saloon. James M. Bradley’s “Parlor Saloon” was built in Sept. 1903. The Parlor sold whiskey by the drink, bottle or in re-fillable jugs. Bradley also sold beer, wine and cigars, and a fine restaurant was attached.

“Although Bradley was involved in saloons, gambling and prostitution,” wrote Selle, “he and his wife were part of Sandpoint’s ‘high society.’”

The Bradleys had a large, beautiful home at 221 Pine St. where they often entertained Sandpoint’s “elite residents.”

Behind the Parlor was a large outdoor dance platform where an orchestra would play. A 50-foot by 60-foot dance floor was available for all the loggers, miners and ne’erdowells to buy a dance with a lady.

When Bradley sold his saloon to Chris Peterson and George L. Arnet in 1905, it was re-named The Stockholm Bar. This saloon and gambling house quickly gained a rowdy reputation in Sandpoint.

Just north of the Stockholm, Forest F. Peterson constructed a long, narrow building in which he operated a bowling alley.

“This added further to the ‘entertainment’ flavor of the district,” wrote Selle.

Directly adjacent to the dance floor were the infamous “cribs” where the ladies of the night would take their Johns for some discreet private entertainment.

Frank Springer sold the land directly east of where Starbucks Coffee Co. is currently to Hugh McGuire, who erected two small frame buildings with permission from the city.

“The only stipulation placed on McGuire was that he construct a high board fence around his enterprise so that ‘polite society’ traveling back and forth across the Bridge St. bridge would not have to see his painted ladies going about their business,” wrote Selle.

The cribs opened in late 1903. Since McGuire and his partner Jeff Davis didn’t live in Sandpoint, an African-American prostitute named Grace Freeman ran the business and collected the rent from the girls. The best known soiled doves in these cribs were Dixie Colton, Victoria Jefferson and Maud West.

In November, 1905, the cribs burned to the ground. They were probably deliberately torched by an irate patron who threatened revenge when he was ejected the night before.

“However, because this patron was a prominent citizen of Sandpoint, the police did not investigate him,” Selle wrote. 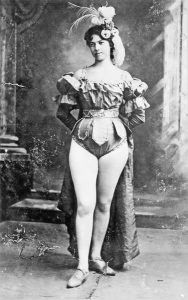 “Klondike Kate” – a famous lady of the night during the Klondike Gold Rush in Alaska. Photo courtesy Wikipedia.

The cribs were rebuilt as a larger, two-story building by Grace Freeman with financial help from James M. Bradley (we’ll talk more about Bradley in the next article).

Since prostitution as illegal in Idaho, the city fathers could not legitimize the business by taxing it. Instead, they came up with an ingenious method of collecting their due; the girls were routinely arrested about once a month and fined $10 each. The fine allowed the city to turn its nose on the nefarious dealings, while also profiting from it.

It was in 1907 that the red light district along First Avenue was officially abandoned. Cribs were built across Sand Creek to the east, near where Trinity Cafe is located today. It was said that if women were caught practicing the lewd arts west of Sand Creek, they would be arrested for real and face trial.

The former cribs on First Ave. were converted into a rooming house, but despite the severe penalties, city leaders continued to have problems with prostitution practiced there after the ordinance passed.

Next week, we’ll tell you the story about how a jealous husband tried to kill his wife, a famed “soiled dove” operating at the Owl saloon in old Sandpoint.