Is there a rental crisis in Sandpoint?

By Cameron Rasmusson and McCalee Cain
Reader Staff and Intern

Growing pains are inevitable, but some hurt more than others.

For Sandpoint, housing has been a persistent source of pressure as growing businesses attract new families into the area. It’s a problem with no easy answer. Numerous factors influence housing availability, and depending on one’s circumstances require different types of housing.

Perhaps no group presently faces a more challenging market than those looking for affordable rentals. And it’s a market that grows thinner as more property owners choose to sell their homes to retirees or utilize them for short-term and vacation rentals. 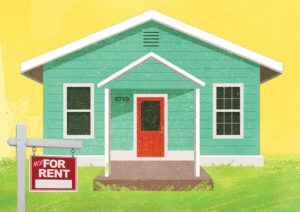 “(The market) is super competitive,” said Evan Metz, a local renter. “We would check Sandpoint Online, Craigslist, the newspapers, Facebook. We had a whole circuit of probably six different places we would check, and we had a schedule to check them three times a day. And there were hundreds of other people doing the exact same thing.”

This is not a problem exclusive to Sandpoint. According to Sandpoint City Administrator Jennifer Stapleton, cities across the region and particularly tourist communities are struggling to maintain sufficiently diverse housing. Sandpoint Planning and Economic Development Director Aaron Qualls said that the “missing middle,” a shortage of multi-unit or clustered housing configurations typically occupied by workforce members and young families, is a problem not just locally but nationwide.

“There’s not a lot of inventory,” said Ned Brandenberger, president of Sandpoint Property Rentals. “The rental market is very tight, and therefore it’s tough to find a rental. It’s especially tough for people that may have had some trouble with their credit in the past, or some problems making payments on rent. Those are the kind of people that are hurt the worst.”

The problem ultimately boils down to a simple economic principle: too much demand and not enough supply. According to census data, Sandpoint grew by 5 percent between 2016 and 2017, an astonishing jump from its historically typical growth of 1 percent annually. That makes Sandpoint the seventh-fastest-growing “micropolitan” area – a population base of fewer than 50,000 people – in the country.

“From a renter’s perspective, it’s very difficult to find housing (right now),” said Maddie Gill, a Realtor and landlord. “It’s almost becoming a retirement community, with more home ownership and higher rates. The lack of housing is kind of pushing people out of town.”

The simple solution to a supply problem is to increase production, but that’s easier said than done. According to Stapleton, developers have recently been more conservative regionally about the projects they’re willing to undertake. What’s more, the building industry is suffering from a dearth of workers. Following the 2008 recession, Stapleton said there was a mass exodus out of the building industry, and it has yet to recover.

Homeowners opting to use their properties for short-term or vacation rentals is another factor that reduces housing availability for long-term residents. Indeed, it’s one the city has worked to get a handle on for years, particularly when it comes to ensuring that short-term rentals pay the requisite taxes. According to Qualls, a new set of vacation rental policies may help address the situation. Under the new system, regulations on short-term rentals shift depending on whether or not the property is occupied by the homeowner.

“It’s actually a fairly innovative system,” Qualls said. “I think we’re leading in the state in this regard.”

Short-term rentals where the owner doesn’t occupy the property are managed by permits, which are capped to a maximum of 35 per residential zoning type. This helps ensure that taxes are collected and alleviates some of the neighborhood tensions that can result from a constant turnover of residents.

In the near future, the Sandpoint council members will also consider ramping up the city’s ability to enforce short-term rental laws on individuals who attempt to circumvent the system. According to Qualls, this has become a problem in many cities over the past several years, and there are now services that can detect when properties are being rented illegally. The city is considering the same service used by Bonner County, which uses a variety of technologies to pinpoint scofflaws.

“They can tell you who is operating a vacation rental and where it is, as well as provide reports with evidence like screen shots,” Qualls said.

Of course, while the city can work on initiatives to increase housing availability and affordability, there’s another side to that coin: wages. And that aspect of the dynamic is much more in the hands of the private sector.

Ultimately, Stapleton said this is an issue to be resolved not by the city alone, but by collaboration with other regional municipalities. For an issue with so many moving parts, it will take teamwork to identify effective practices and programs.

“At the end of the day there isn’t a simple solution,” she said. “This is one of the most multi-faceted issues out there.”