N. Idaho hunters prepare for the worst as chronic wasting disease closes in on the state’s eastern border

As hunters hit the mountains this fall on their annual mission to fill their freezers, many harbored a concern that the meat they harvested might be tainted by chronic wasting disease — a neurological affliction recently found in a number of deer, and even in a moose, in neighboring Lincoln County, Mont. 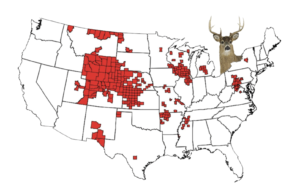 All the counties where CWD has been found in free-ranging populations highlighted in red. Courtesy of the Centers for Disease Control and Prevention.

According to the Centers for Disease Control and Prevention, CWD is a progressive, fatal disease that affects the brain, spinal cord and other tissues of both farmed and free-ranging deer, elk and moose.

But is CWD in Idaho?

The answer to that question may come sooner rather than later, as the Idaho Department of Fish and Game has placed a number of check stations around the Panhandle where hunters can take deer heads for CWD testing. The stations are set to operate Saturday, Nov. 23 and Sunday, Nov. 24 from 10 a.m. to sunset. For hunters in Bonner and Boundary counties, the temporary locations are in Priest River along Highway 57 and in Samuels along Highway 95. Permanent freezers where heads can also be dropped for inspection are located in Bonners Ferry at Far North Outfitters, 6791 South Main St., and in Sagle at the WaterLife Discovery Center, 1591 Lakeshore Drive.

IDFG officials will take lymph node samples from the heads and get back to the hunter with results in about four to six weeks.

IDFG Senior Conservation Officer Matt Haag said the question is not if CWD will make its way from Montana into Idaho, but when.

First identified at a captive deer facility in Colorado in 1967, CWD has since spread to 24 states, Canada, South Korea, Finland, Sweden and Norway. No case has ever been recorded in Idaho, and IDFG is taking measures to keep it that way — including outlawing the importation of caracasses from other states and banning the use of natural cervid urine for big game hunting. Cervids are any mammal of the deer family.

CWD is caused by abnormal proteins called prions, which cause damage to other normal prion proteins found in brain tissue and the spinal cord, as well as other tissues throughout the body, leading to brain damage.

Similar prion diseases include bovine spongiform encephalopathy — also known as mad cow disease — and variant Creutzfeldt-Jakob disease in humans, which causes dementia and ultimately death. Symptoms of CWD in cervids include drastic weight loss, lack of coordination, drooping ears and exhibiting no fear toward people. However, most animals with CWD don’t exhibit any symptoms.

CWD spreads among animals through contact with bodily fluids, but evidence also suggests prions can live in soil for decades and can only be destroyed in temperatures above 800 degrees Fahrenheit.

Haag said the greatest culprit in the spread of CWD is people feeding wildlife. Though officials like Haag frown upon the practice for a variety of reasons, CWD is adding new urgency to the issue. Haag said feeding encourages species of all types and ages to congregate, heightening the chances of saliva sharing and nose-to-nose contact between infected and uninfected populations.

“Usually bucks aren’t feeding with fawns, so it just exponentially ups the chances of it spreading further,” he said.

While North Idaho’s deer, elk and moose are certainly at risk for CWD, the question as to whether humans can contract the disease remains largely unanswered. Most wild game and health officials advise against eating CWD-infected meat, but studies have yet to indicate a clear transfer from ungulates — or hoofed mammals — to humans.

One study, conducted by veterinary scientists at the University of Calgary, exposed macaque monkeys to chronic wasting disease prions by a variety of methods, including inserting the prions straight into the monkeys’ brains and having them eat infected meat. Though the study is not yet complete, scientists say some monkeys have displayed “subtle and transient” symptoms of what might be CWD, but for now, the evidence is inconclusive.

Hank Edwards, a wildlife disease specialist with the Wyoming Game and Fish Department, told High Country News that he’s seen a range of reactions when hunters find out they harvested an animal with CWD. He heard about one hunter burning his clothes and cell phone, and disposing of his gun. Another received the news and opted to eat his kill anyway.

Haag said that because research is ongoing and there are still a lot of unknowns when it comes to CWD, the concern he’s seeing from some local hunters is completely merited.

“When something new shows up, there’s panic,” Haag said. “[But] there are some states that have been dealing with [CWD] forever. I don’t think it should cause a panic, but it should cause concern and some behavioral changes in what we do.”

For one, Haag said people need to stop feeding wildlife in their backyards. Second, proper carcass disposal can be helpful in preventing the spread of the disease. Haag said animal carcasses should be taken to the nearest waste transfer station in order to be most safe. If tests reveal an animal is CWD positive, he said the carcass should be taken to a lined landfill, the nearest to Bonner County being the Fighting Creek Landfill in Kootenai County.

Local hunter Travis Icardo said CWD has been on his radar for the past decade, but that in recent years — as the disease has become more prevalent closer to North Idaho — the topic has come up more and more in his conversations with fellow hunters.

“It’s not just something that’s going on on the other side of the Rockies — that’s what people need to know,” Icardo said. “We’ve been blessed because it didn’t seem to be traveling very fast, but now it seems to have jumped from eastern to western Montana in what seems like overnight.”

Icardo is working with Haag and a number of other concerned citizens to spearhead a local effort to spread the word about CWD. Though their overall strategy is still in the works, Icardo said a main goal is to educate people about the detrimental effects of feeding wildlife.

“Will we ever get everyone in Bonner and Boundary counties to stop feeding? No,” he said. “But if we stop 50%, does that slow the spread?”

Since Panhandle hunters haven’t been faced with the disease firsthand, Icardo said it makes sense that very few are aware of the risks that come with harvesting a CWD-infected animal.

“But in life moving forward — we’re going to have to be,” he said.

Learn more about chronic wasting disease at cdc.gov/prions/cwd. Those with questions about the CWD check stations should contact the IDFG Panhandle Regional Office at 208-769-1414.