The former governor of Idaho left a lasting legacy

Cecil Andrus, Idaho’s longest-serving governor and former U.S. secretary of the interior, passed away last week. We asked several local residents about their memories and impressions of Andrus in their working and personal lives. 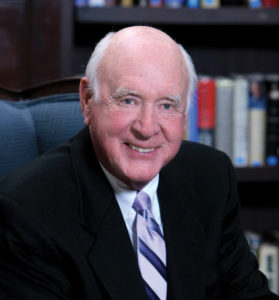 A longtime friend of Andrus, Pete Thompson is the co-founder of the Bonner County Daily Bee, served as his campaign manager in Bonner County. Thompson remembers Andrus as a warm friend with whom he shared many interests.

“Cece Andrus is a person who I considered a very close friend,” Thompson said. “I can’t tell you all the many things he did for me.”

While Thompson appreciates Andrus’ legacy as a politician, it’s the personal memories of friendship he remembers most fondly. One moment that sticks out in his mind is when Andrus visited North Idaho and helped the Thompsons by taking on a paper route. It was just one memory they established in the Sandpoint area.

“He spent some time with me when I had a boat on Pend Oreille, and we fished together,” he said.

Thompson assisted Andrus by taking on a position with the Idaho Fish and Game Commission. He said it was his pleasure to assist with Andrus’ legacy of conservation.

“I have to say he was an excellent governor,” Thompson said. “He did so many things.”

“My interactions with Gov. Andrus were always cordial, respectful, and if I asked for his observations or input he would graciously offer it,” said Sen. Shawn Keough. “When I first ran for office in 1996, Gov. Andrus did a radio ad in support of my opponent, the sitting senator — a Democrat — Sen. Tim Tucker. I saw Gov. Andrus after the election (I won) and teased him about supporting Sen. Tucker, but allowed that support was a given seeing as they were members of the opposite political party. Gov. Andrus was very gracious and offered me some advice: “Shawn, it’s all about the money.” At the time I wondered what he meant. Now, over the years, with my service on our budget committee and as co-chair of the budget committee, his advice was insightful and spot-on at all levels. Policy implementation, running state government, raising and cutting taxes, building roads, funding schools, etc.: It’s all about money.

“Gov. Andrus was a good leader. While occasionally we were on opposite sides of issues, he always knew the issue and knew how he wanted to address it and worked towards his goals. He was always approachable and gracious. And, when it came to education in particular, I believe his leadership moved Idaho forward.”

“I didn’t know Andrus well, but I can vouch he was savvy with the media,” said Chris Bessler. “I was a 20-something reporter when I first interviewed him here in Sandpoint in about 1982. This was a couple years after his term as Secretary of Interior, which ended after Ronald Reagan beat Jimmy Carter. Andrus gave a good interview, and when the talk veered around to how he viewed Reagan’s so-called “trickle-down” economic policy, he paused. “I came up with something good for you. Here’s a quote: ‘Waiting for Reaganomics to work is like leaving the runway lights on for Amelia Earhart.’” Reporters love colorful quotes, and of course I used it in the story.

“And, side note, I think time proved Andrus right about Reagan’s policy of big tax breaks for wealthy people trickling down to help the regular folks. Still waiting for that. In fact, when I see stories about the various groups still searching for Amelia Earhart’s plane, I still think of the Andrus quote. Except now I think expecting to find her plane is like waiting for Reaganomics to finally start working.”

Kermit Kiebert remembers Andrus as a man of two sides: the kindly, personable man and the hard-nosed politician. According to Kiebert, he could switch easily between both sides depending on what the situation demanded.

“He could be really, really nice, or he could be ruthless, but I’m going to remember the good side,” he said.

Kiebert fondly remembers how Andrus always had time and a tasty snack ready for his son as he grew up. And importantly, Andrus was a governor who understood the character and needs of North Idaho.

“He was from northern Idaho, and he was a lumberjack,” Kiebert said. “He truly recognized the lunchbox folks that make the wheels go round in an economy. He was very invested in transportation (and instigated many) projects. Of course, he was an outdoorsman and loved to hunt and fish, so we can always thank him for looking out for the environment.”

“He helped put the North and its resource-based economy on the map,” he added. “ A lot of what we have today we can attribute to him.”