You might be wondering what a bunch of Slavic fairy tales are doing in a science article. That’s good. Curiosity and skepticism are important traits to have while reading, and two traits most often emphasized by folktales throughout history. 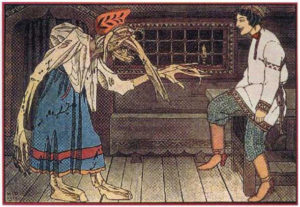 Why Slavic, you ask? Well, I have Eastern European ancestry with some wild stories to share, and it’s always fun to see the similarities and potential origins of stories you know from your own childhood.

Most folktales, or fairy tales as we know them, are Germanic in origin. Germanic paganism had a lot of influence from the Nordic cultures around Norway, as well as the Slavic peoples from Eastern Europe and Central Asia, not to mention the invaders of Rome. Though the Soviet Union tried to snuff out remnants of pagan culture in many Slavic countries throughout the 1900s, the stories persisted in rural villages throughout Poland, Ukraine, Romania, the Czech Republic and Slovakia.

Baba Yaga is one of the most powerful and enduring figures of Slavic folklore, an enigmatic figure whose name is uttered in fear even today. She is an old woman that lives in the forest within a house that walks on chicken legs. Sometimes she flies through the sky in a large mortar and pestle. Baba Yaga’s role reflects the crone or witch in Germanic folktales, which is reflective of the role played by trickster and mischief-maker Loki in Nordic mythology.

Stories about Baba Yaga are generally cautionary, warning children not to trust strangers or let their curiosity lead them into dangerous situations like the forest. Her role varies from story to story however, and I could probably write an entire article on her influence alone.

Strigoi are another, more malicious entity from Slavic folklore, and the origin of Bram Stoker’s Dracula. Strigoi are essentially vampires — sapient corpses that lived sinful lives, risen from the dead to feast on the blood of the living. Removing a strigoi is no simple matter, requiring exhumation of the offending corpse, placing cloves of garlic beneath its tongue, cutting out its heart and pinning it to the coffin with a wooden stake through the chest.

The most interesting traits of the strigoi come from its name, which has roots all over Europe. Striga is a genus of parasitic plant also known as “witchweed” that is notorious for destroying cereal crops throughout Asia and Africa. In Latin, strega, means “witch” and has seen a resurgence in use as a form of neopaganism, similar to Wicca.

Vodyanoy are a form of water spirit attributed to drownings throughout the Middle Ages and early Communist rule of Eastern Europe. They appear as a cross between an old man and a frog and will often lure curious onlookers to the water’s edge, where they will be pulled in and drowned.

This figure is fairly common throughout all of Europe and even beyond, bearing a resemblance to the Japanese kappa and the Scottish kelpie that have served as cautionary tales to avoid being foolish near rivers and lakes, and to avoid unfamiliar animals at the water’s edge.

As far as appearances go, Vodyanoy are a far cry from the beautiful Rhinemaidens popularized by Richard Wagner in the Ring cycle, the musical series responsible for the famous piece: “Ride of the Valkyries,” and by extension, the Looney Toons episode: “What’s Opera, Doc?”

The effect of water spirits in folklore may be one of the reasons that many of our ancestors survived long enough to reproduce, and if you share an indirect genetic lineage with me, you may have the Vodyanoy to thank for that.

The purpose of the domovoi legend was partially one to teach respect of the home and of the unknown. Balance and care in your home directly translates to the same outside of it — even if you’re having a miserable day, your home is a place you love returning to. These beliefs were linked to a number of superstitions that persists to this day, and could just be a product of the human brain actively searching for correlations and connections to things and events we can’t effectively rationalize.

While I can’t guarantee the library will have any of these stories any time soon, Mother Goose and Storytime are available for kids under the age of 5 every Tuesday, from 10 a.m.-11:30 a.m. at the Sandpoint library. The Clark Fork library also has stories and more every Wednesday from 10:30 a.m.-11:30 a.m. It’s always good to check the events calendar on their website beforehand. Who knows, maybe your domovoi needs you to step out for an hour so he can return that sock you lost to the dryer in 1992.