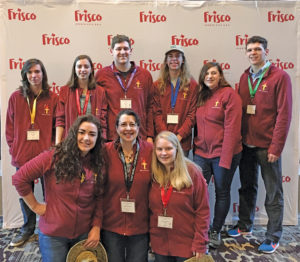 The team, composed of members Adele Marchiando, Allison Kinnard, Corinne Capodagli, Shane Curtis, Sam Jackson, Emma Reed, Hyrum Hunsaker and Liam Loper, competed in Division 4 with 16 other teams and finished with an overall score of 39,507 points, taking ninth place in their division and 28th in the nation out of a total of 72 teams.

Approximately 700 students from the United States, England and China took part in the competition. Marchiando took home three medals, with the second highest essay score of the entire competition, earning her a gold in the category, as well as a bronze medal in both the speech and interview categories.

Curtis earned a silver medal in the economics category. The team also took first place in Division 4 in the Super Quiz. The SHS team beat the other Idaho Academic Decathlon team, Sugar Salem, who competed in Division 3, by a difference of 1,293 points and is currently number one in the state of Idaho.

The students were accompanied by their coach, Dana Stockman, and parent Carol Curtis, who volunteered as a speech judge and a Super Quiz proctor at the meet. They look forward to the prospects of competing again next year and would like to thank all of the following sponsors who helped them get to Texas:

The team wishes to thank everyone for their generosity and support, without which they could not have traveled to Nationals.