A supplemental school levy has been in place since Lake Pend Oreille School District became its own district in 1999, requiring administrators to return to voters every two years for approval on another round of local education funding. While the idea of a supplemental levy is to make school funding simpler, running a levy election is anything but simple. According to district officials, each election cycle locked up hundreds of staff time hours — hours spent compiling data, crafting presentations and attending meetings to pitch the district’s worthiness for continued funding.

The option to ask voters for an indefinite levy has always been available to the LPOSD school board. For many years, however, officials set it aside in favor of regular levy measures at the ballot box. Following the departure of previous district Superintendent Shawn Woodward and the installation of replacement Tom Albertson in 2019, the board deployed the previously unplayed card. 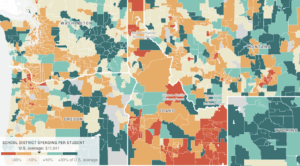 Based on analysis of federal data by Education Week, the vast majority of Idaho school districts rank below average per-student spending in the United States. Screenshot, npr.org.

Voters approved the $12.7 million request in November by a narrow margin, with 4,256 in favor and 4,034 against. Despite a slim 51% majority, the matter appeared settled. At least it did until late December, when local property owner Don Skinner challenged the validity of the election by pointing out that LPOSD officials didn’t disclose the average annual levy cost on the ballot. The school board announced Jan. 9 it would contest the challenge.

While Albertson said he was limited in what he could say about ongoing litigation, the school district released a statement on the matter:

“We remain focused on and committed to the education and success of our students. We appreciate the support of the community and look forward to the Court’s decision on this matter so we can move forward with clarity.”

The heart of the disagreement between opponents and defenders of the indefinite levy vote rests with a state rule requiring ballot language to describe a general taxpayer cost.

Established in July 2019, the regulation requires ballot language to list the taxpayer cost per $100,000 of property value.

According to the LPOSD statement, “We feel the results of the election would not have been different had the per $100,000 tax cost been included on the ballot itself, and that the will of the majority should not be overturned for what was a technical error.”

In the weeks following the November election, state officials confirmed that the omission of required ballot language opened the school district to a legal challenge. The question is whether a court will determine that voters were sufficiently misled by the absence of that information to run afoul of the rule.

The opposition to the election validity is organized primarily around Facebook group Idaho Tax Watch. Because the challenge is initiated by private citizens, legal costs are primarily being covered through crowdfunding. Supporters are seeking donations to cover the legal fight through social media. Idaho Tax Watch did not return a request for comment by press time. However, the organization rallied support through Facebook posts following LPOSD’s decision to contest the challenge.

“The LPOSD has elected to fight Mr. Skinner’s challenge to their November levy, which they admit violated Idaho law,” the post reads. “We believe this is a terrible message to send our children about integrity and respect for the law.”

The school district’s legal defense argues that district officials made every effort to make that information available.

“The District acted in good faith to put the question to the voters,” LPOSD argued in its statement. “The levy, its use, and impact to our taxpayers were shared over the past year through public forums, mailers to voters, radio interviews and public presentations.”

Furthermore, court documents filed by attorneys representing LPOSD indicate that in determining election validity, the burden of proof lies on the challenger. It’s up to the plaintiff to establish that the election would have gone the other way if the ballot language included tax estimates. The school district’s case also depends on precedents where Idaho elections were upheld despite technical defects.

“Significantly, [Idaho Code] contains no provision directing that omission of the information invalidates the election,” court documents state. “Therefore, omission of such information would fall under the general rule for election defects, which is that they must be shown to have altered the result.”

Opponents of the election results argue that the school district has a legal responsibility to be in full compliance when drafting ballot language. But LPOSD attorneys counter that the real question is whether the technical error subverted the will of the voters. If the defense gets its way, the challenge will be dismissed by the court with prejudice, putting an end to the matter.

“The Idaho Supreme Court, and other states’ cases … reject the theory that strict statutory compliance is required after an election has been held,” the defense’s court documents state. “Thus, Plaintiff cannot show by clear and convincing evidence that the ballot defect affected the results of the election.”