It’s no secret that there’s something crass and sleazy about Black Friday.

Every year, fights break out, people are trampled and thieves prey upon the chaos, all for the chance to score a deal on a flat-screen TV. For a day that heralds the Christmas season, Black Friday starts the holidays off on a sour note of animalistic consumerism. It’s enough to make you shout Charlie Brown-style in exasperation, “Isn’t there anyone who knows what Christmas is all about?” 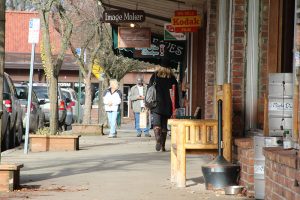 The sidewalk along North First Ave. Photo by Ben Olson.

It’s safe to say local downtown business owners have a better answer to that question than the corporate executives and board members of the big box stores. For the past several years, they’ve encouraged residents to save some of their post-Thanksgiving shopping for Shop Small Saturday, a burgeoning movement to support local stores come the holiday season. It’s a Christmas shopping opportunity that is good for small business, good for the local economy and certainly spreads a more peace on earth and good will toward men than the Black Friday retail morass.

There’s some irony in the fact that the push to support small business was introduced by American Express, itself a long sight from a mom and pop shop. In 2010, the company launched Small Business Saturday, a bid to drum up revenue for Main Street instead of Wall Street, in the wake of the economic crisis. The next year, the U.S. Senate formally recognized the day. Support for Small Business Saturday spread to every state in the nation in 2012, and in 2014, American Express reported an estimated $14.3 billion spent at small businesses on the day.

“I think it’s probably been five years since we started to hear about it [in Sandpoint],” said Harris. “It’s just picked up steam every year. We as a downtown group decided to make more of an event out of it.”

This year, it’s hard to find a politician or public figure who isn’t on the Small Business Saturday bandwagon, and social media is more important than ever to the experience. Actress Kristin Wiig is spreading the word on Facebook, while organizers are encouraging people to share their shopping extravaganza on Twitter or Instagram with the hashtags #ShopSmall and #SmallBizSat.

In Sandpoint, local business owners are putting their own spin on the day with Shop Small Saturday. A collaboration between 20 downtown Sandpoint businesses, the Saturday, Nov. 26, event promises to offer up plenty of money-saving deals while scrubbing the mire off the typical post-Thanksgiving sale. Shop Small Saturday is a chance to head downtown with your loved ones, enjoy a lunch at a local restaurant and attend to your Christmas shopping, Harris said.

Much like the national version of the event, Shop Small Saturday has grown each year. In the beginning, Harris said getting the word out was a challenge. Public awareness grew slowly with time, and now, the Saturday sale is really catching on through TV ads and other national marketing pushes. Participation among local businesses has expanded along with it.

“People now have the name recognition, which has helped tremendously,” Harris said. “We’ve had pretty much 15 to 20 businesses participating each year, and we have 20 businesses this year. We feel like it’s better to work together to promote downtown Sandpoint.”

This year, downtown shoppers have a chance to win a $250 shopping spree just for turning out and buying a few Christmas presents. Simply shop at one of the participating businesses, and you’ll be entered into a drawing for the grand prize. Harris said the winner will likely be announced the week after the event.

Between the fun experience, deals and community spirit, Shop Small Saturday ushers in the holidays with nothing but good vibes. If you’re looking to put a little Christmas cheer back in your annual gift-giving, it’s a combination that’s tough to beat.