Two citizen groups have filed a lawsuit in regard to the sale of land from Pend Oreille County and the Pend Oreille Public Utility District (PUD) to HiTest Sand, the Canadian company behind the proposed Newport silicon smelter. 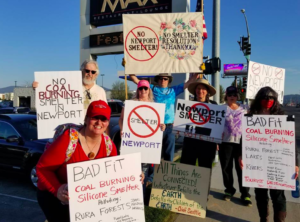 CANSS has been vocal about their opposition to the smelter. Photo courtesy Facebook.

Plaintiffs Citizens Against the Newport Silicon Smelter (CANSS) and Responsible Growth*Northeast Washington (RG*NEW) are claiming Pend Oreille County sold land to the Pend Oreille PUD knowing they’d then sell the land to HiTest for the construction of a smelter. This lawsuit comes after a demand letter from the two citizen groups to the PUD, in which they requested that the land sale be unwound and the public land be returned.

“It is a sad day when constituents of a local PUD have to take their district into litigation in order to have a voice in a public land transaction where their rights to vote were clearly violated,” said CANSS Board Chairman Deborah Barker, referring to a Washington State statute that requires an election to be held when a PUD seeks to sell non-surplus land.

According to CANSS, the Pend Oreille PUD did not hold an election before selling the property to HiTest.