“Educated” by Tara Westover is enjoying its ninth week on the New York Times bestseller list, right up there with James Comey and other authors of current political intrigue. There’s good reason for Westover’s success with memoir out a remote corner of Idaho: It reads like a well-written novel, but it’s all true. 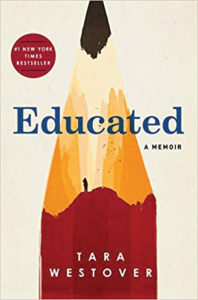 Her story unfolds in the aftermath of the infamous Ruby Ridge episode in the North Idaho Panhandle in August 1992, where Randy Weaver and his family withstood an 11-day siege after a shootout with federal agents attempting to charge him with firearms violations. Weaver’s wife, his 14-year-old son and a deputy U.S. Marshall were killed.

The Westover family lived in faraway southeastern Idaho and Tara was only five years old when her father told the Weaver story. The a story framed her childhood as her father, deeply religious and already detached from society, began to prepare for the day federal agents would come to his compound, possibly on grounds his seven children did not attend public schools. They didn’t even have birth certificates and had never seen a doctor.

This is a riveting story of a hard a hardscrabble life. Tara, youngest of seven children, was put to work with the others in the family junkyard business. When she was 10, she saw her brother, Tyler, leave home, and describes a tender scene of a private goodbye embrace. Then, in the adult narrator perspective, she looks back, recalling his departure “across enemy lines,” and, foreshadowing her own future, writes, “Tyler stepped into a void. He can’t explain where the conviction came from, or how it burned brightly enough to shine through the black uncertainty.”

This is one of many examples of Westover moving deftly through time, describing the horrifying accidents and injuries in the scrap yard, and stopping to reveal how something was changing inside her. “Sometimes, when I was stripping copper from a radiator, or throwing the five hundredth chunk of steel into the bin, I’d find myself imagining classrooms where Tyler was spending his days.”

When we later see Tara Westover in classes at Cambridge and Harvard, her childhood spent sorting copper and steel in the scrapyard seems a world apart.

“Educated” is full of deeply drawn, interesting characters, conflict with parents and siblings, and — more interesting — within herself. A repeated image is of Tara staring at her face in the mirror, trying to discern who she really is. The story is also firmly grounded in time and place. The geography of home is as strong a connection for Tara, as she later moves away, as is family. That this is a true story of a determined young woman breaking bonds of home and place to make a new life for herself — and succeeding — makes it all the more appealing.

I do have one quibble with this book because I know Idaho geography better than many readers across the country. Westover leaves the reader believing the Randy Weaver event was nearby. In fact, that siege, as readers of this review already know, happened more than 600 miles away, about as far from the Westover home as it is possible to be and still remain in Idaho. Certainly, Tara’s father shared a state of mind with Weaver, but not physical proximity within the state.

That’s a minor quibble. The book is a wonderful true tale about a woman who loved her family and the land she grew up on, but nonetheless had to leave it behind to find an education and ultimately herself and her place in the wider world.