Shakespeare in the Park: A free activity for the whole family 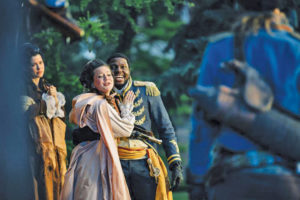 Montana Shakespeare in the Parks’ “Othello” will play at the Bonner Co. Fairgrounds Sunday, Aug. 19. Photo by Adrian Sanchez-Gonzalez / MSU

The show is produced by Montana Shakespeare in the Parks, a theatrical company that has brought the works of Shakespeare to rural communities across Montana, Wyoming, North Dakota, Washington and Idaho. In the company’s 46 year history, they have never performed “Othello,” so this year’s show will be a special one.

“Othello” is a tale of love, jealousy and betrayal centering around the titular character, who is a Moorish general in the Venetian Army and Iago, Othello’s devious but envious and treacherous ensign.

With themes like race at the center of this Shakespearean classic – a rarity for Elizabethan-era theater – “Othello” feels as relevant and timely today as it did in the 16th century.

This year’s performance will also be filmed by a PBS crew gathering material for a documentary on Montana Shakespeare in the Parks to be shown on both Montana PBS and nationally.

Directed by Kevin Asselin, “Othello” is one of the highlights of this year’s Montana Shakespeare in the Parks’ tour across five different western states. The troupe will also be performing “Love’s Labours Lost.”

Thanks to Montana Shakespeare in the Parks’ mission of bringing top-level theatrical productions to the broader public and local sponsorship by Lost Horse Press, “Othello” is free to attend. The Fairground gates will open at 3 p.m. and the play will begin at 6 p.m. It’s a good idea to arrive early to claim a good blanket spot, meet the actors and enjoy refreshments before it begins.

Brietta Leader, Hallie Owen and Titina VanHoorn will also be bringing their local dance troupe, the Gypsy Divas, for a performance. The Divas blend various influences of dance, music and costuming, infusing a spirituality and joy to their dance performances.

The Music Conservatory of Sandpoint will also provide its young students to perform the opening concert for “Othello.” This is the second year MCS has teamed up with Montana Shakespeare in the Parks.

For more information on the play and touring schedule, visit www.shakespeareintheparks.org. For information about Shakespeare in Sandpoint, contact local host Lost Horse Press at (208) 255-4410 or email [email protected]