“The flight was fantastic,” NIHSAP founder and manager Ken Larson said. “It went better than I was expecting, actually. I was very confident, though, the plane is very well-built.” 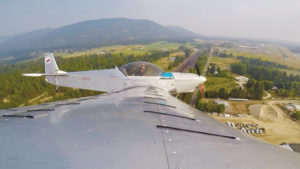 The plane went out for an hour-long spin, followed by a chase plane to observe.

“What we have to do in these test flights is establish data: how the engine and the plane are performing,” Larson said.

The group acquired the plane in the fall of 2015, and had been working on it for approximately two years. After construction was completed, the group waited for approval from the Federal Aviation Administration before flight. In the meantime, they conducted taxi, engine, and instrument tests.

“Because some students graduated and new ones came in, it’s been a shifting group, but we have some students on the project that have been with us since the beginning,” Larson said.

Watching years of work on the plane come to fruition was a special birthday treat for NIHSAP Student President Ron Korn. “It was really cool to see it fly after working on it since my freshman year,” Korn said. “There are no words to describe how it felt to see it 30 feet in front of me when we were going in to land. All in all, it was the best 18th birthday present I could ask for.”

Though they’ve achieved their goal of getting the plane into the air, the group isn’t stopping there: next up for the club is the restoration of a 1945 Taylorcraft airplane.

“It’s going to be built to be a backcountry bushplane,” Larson said. “It has a steel tube frame covered with fabric, so it’s really old-school.”

The Taylorcraft itself was donated by a captain at Horizon airlines, and the engine by a generous Nebraskan man. Club members are currently cleaning and making some repairs to the metal frame, and Larson anticipates that the plane should be completely restored by November.

“Because we’re just restoring this plane as opposed to constructing it like the last one, it won’t take nearly as long,” Larson said.