One never knows (and even that’s not certain)

I recently brought my BMW Motorcycle out of a long winter storage. I missed riding it and now is the time to get ready to rumble.

I assumed the trickle charge I had given the battery would keep it alive, but I turned the key and the battery was kaput. I worried the sharp winter blasts of last January had killed it forever. Dutifully, I pulled the seats, the gas tank, and arranged the various tools for battery surgery. Beemers are quality motorcycles; mind you, technological wonders, and beautiful machines to comprehend and ride. Yet, repairing one can be a daunting task for the faint of heart. 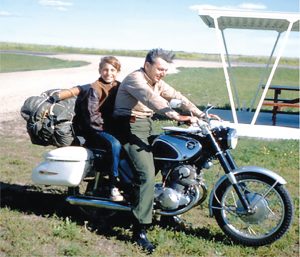 Robert Persig and his 12-year-old son Chris on the back of a Honda SuperHawk CB77. Wikipedia photo.

With a grip on fortitude and a yeoman’s effort I extracted the battery (grip, twist and pull, like yanking teeth) and ran it off to be charged. After a day or so I was anxious, ready to reassemble the works. I put back the cabling, the gas tank, the bike toolset, and the seats. I climbed on board, turned the key and nothing — ?#@*&%!. Stone dead.

Okay, if I am anything at all, I am persistent and methodical, but a mechanic I am not. And, the four hundred page manual had no description for what I was about to do which was to investigate the entire wiring system of an R850R.

After the first few hours of—try this—then try that, frustration was mounting. I was not to give in; however, so I called my neighbor who is a patient man, with technical skill and a Houdini with electrical tools. Beyond the sixth hour we managed to test all the fuses, even the hidden ones, the starter switch included, then we disassembled the relays and followed every path of wire that shown any relation to starting a motor. We searched every color-coded wire—powered each and still nothing worked.

It was the one single black wire that confused us. It went somewhere. We sat a long time puzzled and we looked at each other with that distant forlorn look. Finally, I crawled under and laid on the cold hard floor looking at the damn starter motor and that skinny black wire leading to where we didn’t know.

Now, I am telling you this because I learned something a long time ago, not about motorcycles. I learned something about character measured with the maintenance of motorcycles. That lesson doesn’t always come from a book. But, there is an “art to motorcycle maintenance.” And, character was similarly learned and taught by Robert M. Persig, a motorcycling genius who had authored a book about life’s humble lessons in: “Zen and the Art of Motorcycle Maintenance.”

The book was published in 1974 and was based on a motorcycle trip he took in the late 1960s with his 12-year-old son, Chris. The author died just recently. A lot like today, Persig wrote the book at a time when our culture was reeling from the losses of a disreputable war, a world in turmoil, an upheaval of society, and a people’s yearning for stability and quality. Funny how history repeats itself when we’re not looking.

His book was about fixing a motorcycle on the road and the parallel search for quality in one’s life along the way. So few knew much about him, a brilliant philosopher. A quality note from the website chron.com gives us a smattering of his story:

“Zen and the Art of Motorcycle Maintenance” ideally suited a generation’s yearning for the open road, quest for knowledge and skepticism of modern values, while also telling a personal story about a father and son relationship and the author’s struggles with schizophrenia. A world traveler and former philosophy student, Pirsig would blend his life and learning, and East and West, into what he called the Metaphysics of Quality.

“But some things are better than others, that is, they have more quality,” he wrote. “But when you try to say what the quality is, apart from the things that have it, it all goes poof!…”

Having read the book back then, I too came to search for quality in everything I saw. It took me a long time to realize quality is definable only as much as we define it inside ourselves and it is there we find our Zen.

So, I lay on the concrete slab looking over the starter motor and found a skinny black wire that seemed to go nowhere and I thought about motorcycles and their maintenance and about Persig, about character, and the persistence of searching for answers. Then I noticed how that wire led directly to the back of the kickstand. How funny is that, I thought—a stupid wire that goes from the starter switch to the kickstand. I jumped up and said:

“Okay, watch this…” and swung my foot into the kickstand, flung it back, grabbed the key and turned it and twisted the throttle.

My neighbor’s jaw was as long as a necktie. We both stood with surprise etched in our faces — the motor was humming in a cloud of exhaust. I smiled, gobbled down a mountain of humble pie and apologized for taking up my neighbor’s afternoon with a fool’s errand.

It was one of those (stupid) moments in my life. I had forgotten the ignition is tied to a safety switch on the kickstand to preventing one (like myself) from dumping the rider on his or her face when starting the engine. You see, one doesn’t need to perform an autopsy, all one has to do is turn the key and kick back the kickstand. I guess it was a long winter. I think I’ll read again, “Zen and the Art” of you know what.

Robert Maynard Pirsig, born September 6, 1928, died  April 24, 2017. Rest in peace, Mr. Persig. Thank you for your motorcycle ride and the maintenance required of us.

Tags: barry burgessrobert persigzen and the art of motorcycle maintenance