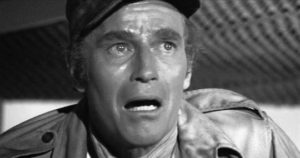 “SFN Movie Night! I would never miss it!”

It may be best remembered for a single line of dialogue, but there’s impressive world building and style in this outing directed by Richard Fleischer and starring Charlton Heston. See it on the big screen at a showing hosted by Sandpoint Filmmakers Network, then stick around afterward to discuss the movie.

In a future devastated by pollution, poverty, overpopulation, euthanasia and depleted resources, the majority of America’s population is out of work and surviving on rations produced by the Soylent Corporation. In this bleak society, New York City Police Department Det. Frank Thorn investigates the murder of a wealthy man that leads him to uncover a disturbing secret.

SFN Movie Night takes place 7 p.m. Tuesday, March 27, at the Little Panida Theater. It is free to attend, but a suggested $5 donation is recommended to help cover the cost of the theater rental. Beer and wine is offered for sale by the Panida Theater. Although a private event, it’s simple and free to join SFN: simply go to https://www.sandpointfilmmakers.net/join or sign up at the screening.